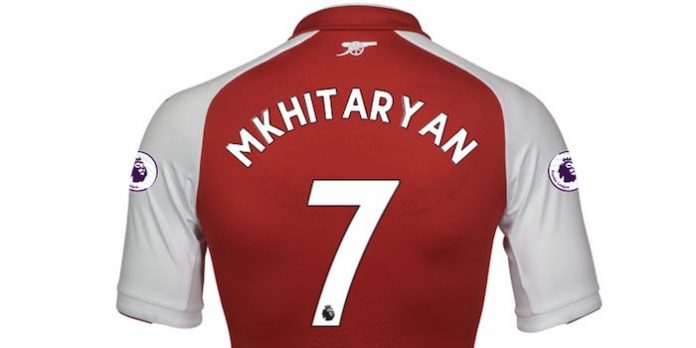 Arsenal’s new signing, Henrikh Mkhitaryan, was brought in to replace Alexis Sanchez in the team, and he’s also taken over the Chilean’s old number.

The former Borussia Dortmund and Shakhtar Donetsk man will sport the famous number 7, worn by such luminaries in the past as Robert Pires, David Rocastle, Tomas Rosicky and Nelson Vivas.

No pressure there, of course, and Arsene Wenger is banking on the Armenian to add qualities to his side that will help us become a more potent attacking force.

Asked what he would bring to the side, Wenger said, “I would say quality of runs, quality of creativity, and he can be very penetrating with his passing and his runs. Also technical stability in our team and experience as well.

“He knows what it is to fight at the top level. I have no doubt about his attitude, his commitment, his desire to do well.

“He suffered a little bit maybe from the competition he had there [at Man Utd] and overall that is his challenge.

“My challenge is to get him to express his talent completely, that we know is absolutely right because he has done extremely well, so he has a new challenge that we want to help him be successful in.”

From what I have seen so far, he looks very capable with both feet. He will definitely fill a good part of the void left by Cazorla since his injury, and I must say I am very excited precisely for that.

He is reminiscent of Cazorla in his vids

Think he could also be the first true pires replacement. That strange ability to seem almost quicker with the ball, eye for a pass, great runs. I’d like to see him and auba either side of lacazette with ozil behind and perhaps wilshere and.. amn in midfield? Whoever it Is, they just need to really stay deep, recycle possession and let those four wreak havoc. I love ramsey but I think he faces a struggle to get back in.

erm…then we buy coq back?

his trademark 17 which wil be taken of iwobi,

we wil se as his own logo uncludes the No.17 which he has on his bellongis cars clothes everything that is why am thinking he will ask for no.17.

He had chance to take no.7 or no.9 no.7 was free at dortmund for years he didnt change numbers, let wait and se actualy i dobt give damm about his shirt number all i want to see is the deal completed as the suspenss is killing as i know it will drag till the end of the week.

I imagine that if it’s that important to him, and that was the only thing standing in the way of a deal, Iwobi would be politely told that his numbers being taken. Hopefully they’ll tell him rather than posting a welcome photo with the number like they did with Perez/Lacazette!

That said can a player’s number change mid season and stay at the club? Would EFL have an issue with that?

Is this all a waste of brain power? Is he even coming?

What number is Lucas wearing ? .. We could give him that one.

Mick you Sanchez
Reply to  Eamonn

Isn’t the number 14 free now? He might prefer that …

If things do fall apart (hey it is Arsenal) could Henrikh Mkhitaryan be our insurance in case we lose Ozil in the summer?

Almost certainly that as well

Which is something to be fair, particularly if we get Auba as well

Would’ve thought this were to be decided once Aubameyang talks had progressed enough to discuss his shirt number (with player number being such an important part of marketing etc). Wonder if this means anything with reference to that…

He’s a talented player, but so was Arshavin.
Arsene’s assessment on trying to get the best out of him is an accurate one.
The thought of Ozil and Mkhitaryan is every bit exciting as it is petrifying.

Tasty one-twos with Wilshere and Ozil. Defence splitting through balls to Lacazette. A few goals… Is this really too much to ask!?!

Certainly not. They can do it while having breakfast.

Corrected it for you, Blogs.

“He suffered from Mourinho there [at Man Utd]”

To be fair, in more ways than one, Mourinho is ‘The Competition’.

Lets hope he will the best 7 of the club

Thought Wilshere was going to take 7 therefore letting Ozil have 10.

V is for Vic Akers
Reply to  Mark

In what dark, twisted world is central midfielder Wilshere a number 7? That would seriously get my OCD on.

Bai Blagoi
Reply to  V is for Vic Akers

And mighty Gallas our number 10.. oh how dark were those days..

gunnerdaremkd
Reply to  V is for Vic Akers

if wilshere change numbers it will be no.4 as our actual world clas mid vieira had and also cesc had. wilshere said that he likes no.4 even he choose for england when he played in the las tournament.

Wilshere gets no.4 afrer per reteriment and 10 goes to ozil with new deals for both.

Really hope that the contract negotiations with Ozil is not delayed because of he Can’t get the number 10 from Wilshere.

A Different George
Reply to  gunnerdaremkd

It was always odd that Viera and Cesc wore number 4, since traditionally that would be a centre-half’s number; an attacking midfielder historically was an 8, the (now-withdrawn) inside right in the W-M.

Mikhi will have to be up there with the arsenal legends who put on the no.7 shirt…here’s to hoping…

This is the article we’ve all been waiting for….

No Griezmann in the summer then ?

Who to, who to, Who to be
Reply to  TheFightingMongooses

was that ever on the cards?

You must be new to Arsenal.

What are your thoughts on this important issue, Blogs?

From what i have seen he will bring urgency and fluency to this team like Rosicky. Will be fantastic to watch at Home but will suffer like the rest of the team in away matches. We don’t have the players who can make the difference in Away games. Aubameyang could be one of those. I still want another attacking player or a powerful CDM this window. I would love Aubameyang + Serej Milinkovic Savic OR Aubameyang + Danilo Pereira.
We need a nasty ’30 games a season bastard’ at CDM/CB.

Wenger is breaking my balls
Reply to  ramgooner

I still want a Range Rover Autobiography with my name encrusted, 20″ bespoke rims and a sound system that could damage eardrums, with Trump’s daughter in the front seat calling me zaddy….. But we know that isn’t going to happen

Oh dear. I thought he would take 14. Looks like he is telling us that he can live up the no.7 expectations and to create history of his own. I hope that he will be the answer to our impotence attacking from the right side (Walcott / Iwobi). Saw his video clips he was unbelievable with his both feet, dribbling like Cazorla, shooting like Xhaka, eyes for a pass like Ozil. It was no coincidence that he can’t perform under Boringho playing deep tactics. He needs an attacking team like Arsenal to flourish. M7

Thank goodness because the shirt number makes the player

A Different George
Reply to  Yagunnersya

So Jack as our only midfielder?

Yagunnersya
Reply to  A Different George

… how would you set the team with two strikers?

I like Elneny and Xhaka pair in midfield. Remember the preseason games? And also this week nd? ! I would luv to see the first formation.

“He suffered from competition at Manchester United ”

Luckily he’ll have no such worries at Arsenal.

Roll up roll up ladies and gentlemen welcome to the Arsenal, where life is free from all competition and accountability.

How DARE you compare him to the magnificence of Vivas?!

If we had got him in the season he went to United I would be buzzing so much more about this than I am now. Still, he has the quality to carry us through, if he can put it all together again. I’m excited to see what he’ll bring to the team. I think we needed some kind of shake up as the team have looked stale. It’s disappointing to lose Alexis but I never believed he would sign a new contract and this is (hopefully) reasonable damage limitation, bringing in a quality player for the next few years. We… Read more »

Wow, that is crazy. He won’t even have played in the competition! Unless they consider third place in the Champions League as Europa league “qualifying”.
Still, it would stop him from playing against us, at least if he doesn’t play for them!

I just hope he is here to play alongside Ozil and not replace him?