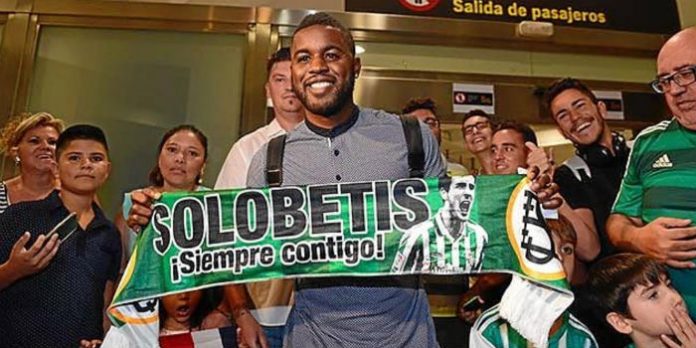 The Costa Rican is in his second spell with the La Liga side, having enjoyed a successful season there in 2012-13. However, this time around things have not gone so well.

The 25 year old has made just four appearances and one start in a season that has been dogged by knee and ankle injuries. He has one goal to his name, coming in a 6-3 defeat by Valencia, but the Spanish side are now looking at the possibility of sending him back to London.

Campbell did enjoy some success with Arsenal after a series of loan spells, but ultimately never quite made the grade.

He spent last season on Portugal with Sporting Lisbon, and it’s clear he’s not a player who is in the plans of Arsene Wenger. Quite what happens if he does return is anybody’s guess, but if we had to put money on it we’d go with a loan deal somewhere on loan for the rest of the season on loan.

It’s what he does.

He’s not the best player in the world, but he always worked hard for us and I’m sure would be a welcome boost to the squad, particularly if Walcott leaves.

Get in whilst you can Joel!

We are playing a right footed kid, who is CDM as a Covering LWB while Campbell would make a good LWB, because of his energy, good left foot and tackling. With Coquelin gone, this is perfect to have a cover for LWB and CDM.

Can’t believe he is still with us some how

1 in 4? No worse than Welbeck then, lol.
Time for another Phoenix rise, now the first Phoenix (Coq) has gone.

Maybe another chance for Joel to be the random catalyst to save our season again. Wenger needs one for the second half of every season for like 7 years now.

STAY WHILST YOU CAN, JOEL

I don’t understand. Players like Campbell, Perez et al, all seem to show at least some promise in an Arsenal shirt. I don’t know, maybe it’s just because it’s some fresh/different when they do get their chance in red and white. Then we get annoyed they don’t get more opportunities. But ultimately, they get frozen out, shipped out on loan and the proof is in the pudding, they don’t forfill that promise.
Can’t tell if Wenger is right, or if it becomes a self forfilling proffacy.

Did you mean self-fulfilling prophecy? It seems Wenger doesn’t give some players enough chances, like Perez and Gabriel whilst Campbell has had many. Who knows if he’ll be kept around to finish the season or sent out on loan again? Hard to figure out our manager.

When he got loaned out again alot of people were on AW. For some reason he was making a big mistake. AW is going to make mistakes but JC has never proven while on loan to numerous clubs that he is anything but a squad player at best.

We tend to become very hostile towards players we see on a regular basis when they make mistakes, and take their strengths for granted so discount them when assessing their performances. Young players and new players have a honeymoon period when we overlook any mistakes and focus on their strengths, which we’ve not had the time to take for granted. We do this all the time, not just with football. Given enough time, we’d all be frustrated with Perez and Campbell as we are with other not particularly great players that play or have played for us.

Both Perez and Joel are better tHan Walcott and Welbeck. Joel works very hard and has an eye for goal while Perez is a proven goal scorer. He scored a hatrick and gets dropped next game. Typical Wenger. Look at the farce going on with Ozil and Sanchez. He knows fuck all. Time for him to piss off.

Hard to say. Prior to Coq’s opportunity, Wenger had written him off. He would’ve been sold to a championship squad and probably hovered around the football league like so many of our academy prospect. Fate dealt him an opportunity, he took it, and though he’s left Arsenal now, he’s leaving it as a legitimate top level talent to go to Valencia. I don’t think it’s ever a case of “if they’re so good, why didn’t they make it at x?” Ashley Cole was almost out the door to Crystal Palace. If that had happened, would he genuinely have become arguably… Read more »

Regards to young players coming up through Arsenal academy or others in the Prem that young players can mature at a young age and then flame out and others mature late. How long do you wait on a young player when you have others coming through the system?

Scary lady on the left of the picture with some sort of spiky weapon…….

U mean a phone

After playing so few games in Spain, he does have a world cup spot to play for.

We can’t really complain about our position in the league or the state of the club in general if we fans see or accept players like Campbell as the ones who could save our season.

We’re not competing against Crystal Palace, but against Chelsea, Manchester United, Liverpool, Tottenham (and Manchester City if you want).

more deadwood to get rid of

Similar sentiment from others on here but never thought he was a bad played, has a good work rate and can cover for Theo if he leaves

Ideally we replace Theo with a new player that has a shot at earning the starting position. If not, at this point I’d rather see Riess Nelson covering for Theo. Theo hardly sees the pitch anyhow this season, so blood in a younger player if we’re not going to upgrade on him.

However, perhaps he can be backup to Hector at RWB. He’s certainly not as quick and got burned here or there, which is a detriment, but most of the time he did his defensive duties.

I thought Joel was more promising than most – then, just when he appeared to get a foothold in the team, he disappeared to be eventually sent away on loan. Bizarre, is there something we don’t know about?

He is better than Walcott, Iwobi and the Ox who has now left. We could do with him as a impact 30 minute winger who will also track back , grab a few assists and will play for the shop window and the World cup spot.

Get back while you can Joel…

I would rather prefer Joel Campbell than Theo, I really wonder why he is always sent on loan.
I grew love for Joel years back when he was on loan at Olympiacos after he scored a magnificent goal against Manchester United.
Wenger call Campbell back .

Also people forget that whilst on loan, you’re not actually coached intensely to develop, but to play and deliver now.

I understand Wenger’s style is to just play and learn as you play, but as we’ve seen with the likes of Pep and Conte, many young players respond better to direct coaching and development rather than just play (see difference in Sterling prior to Pep).

Anyone knows how Perez is doing

He’s coming back? Thank christ, we’re saved. Hope he still has that pacifier in his shorts that he can fumble fuck with after banging in all those xG’s we’re sure to get. *rolleyes*

When will we stop moving backwards?

Reminder that.we rejected a bid of £12m for him from Benfica