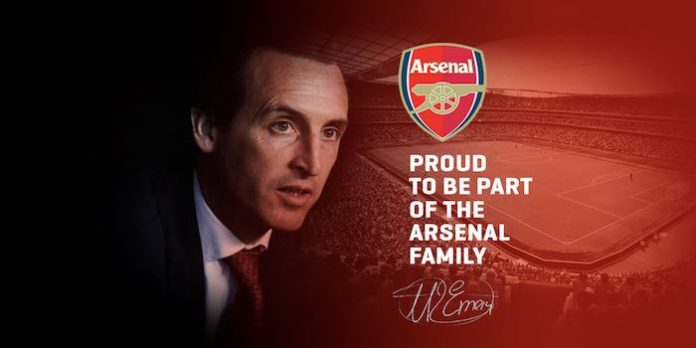 The official website of Unai Emery appears to have confirmed his appointment as Arsenal manager.

When you visit you get a splash page with the following image:

Translation: This is the official website of Unai Emery, football trainer of Paris Saint-Germain, but that’s some shit the webmaster can sort out a bit later.

It’s been a whirlwind 24 hours or so, after the club ditched plans at the last minute to give the job to Mikel Arteta, instead plumping for the more experienced Spanish option.

Emery won the league with PSG last season by 13 points, but was sacked because of their failure in the Champions League or maybe Neymar didn’t like the look of him or something.

Freddie, no, not that one

I’m much more okay with this than with appointing Arteta.

This appointment doesn’t excite me like Allegri would have for example, but at the same time it doesn’t worry me too much. Going for a person who’s never managed before (even if he has potential) seemed absurd to me, and a massive risk.

He is Spanish but the name doesn’t sound like one. Is he of Turkish descend?

I think he’s from the United Arab Emerytes. Word is the deal was pushed through by our shirt sponsors.

It was only last night when the story broke that it was brought to my attention that he wasn’t Turkish. I was surprised to find out he was Spanish.

He’s from Basque Country, his name came from the Euskera “language” which is totally different from spanish (castellano).

Does “Unai” correspond to the Spanish or Italian “Una”? In that case, his name means “The One.” Take that, Mourinho!

So our next manager is Basque. Oh yes, there has to be something here…

Arsenal Basque to the Future.

I get that Allegri has been successful at Juve, but does his brand of football really excite you? Emery is almost a more exciting version (stylistically)

Also, he’s under contract, I doubt we were ever really in for him and it always felt like he was using the Arsenal connection to get what he wanted from Juve (player targets etc, not a pay rise). If we’re going to get excited about managers under contract surely we should eb getting cited by Löw, Jardim or even Guardiola instead?

I wasn’t sure until I’ve heard he want to build around Ramsey. Welcome to the Arsenal!

Agreed. That showed me he really knows our squad and how to get the best out of it. I think his attention to detail and video sessions will especially help Ramsey make better decisions about when to make runs forward and when to stay and help in midfield.

Welcome to the honeymoon period… don’t expect it to last long as our fan base is colonised by irrational idiots.
Welcome “for now” Unai Emery

Yeah, because the last guy wasn’t even getting a fair chance 😀

Site is now 404ed. Guess they have to wait till club does the announcement

I’m getting a 404 error now; good thing that the IRS are handling player procurement and negotiation.

I can’t believe we miss out on Big Sam!
Shame.

Who is big Sam?

I would rather start following Shrewsbury than have Big Sam as “my” coach.

Nicking this post from Reddit user u/t6005 as it articulates my feeling on this much more elegantly than I can: I’m actually thrilled, I thought he was fantastic at Sevilla and for all he gets shit on for falling to that 6-1 Barca game, he was the one that demolished them 4-0 in the first place. He’s in the sweet spot for managers, neither a novice or a dinosaur, and he’s a football obsessive in the same way that Arsene was – and the amount of preparation he makes his team go through is notorious. I think he could be… Read more »

He seems digitally savvy. Not bad for a football manager!

Maybe he’ll give his post match interviews on AFTV then

Yes, apparently he doesn’t speak English either so would fit in well on AFTV.

Don’t get what everyone’s problem is with AFTV. Robbie seems like a nice bloke and I’ve got a lot of respect for him. The others that get interviewed are no different than the fans we here at work or at the pub..everyone is entitled to an opinion and apart from two or three of the regulars, most of them make valid points..Lee judges is a good one to point out.

I’m happy with Emery’s appointment, I just hope we haven’t burned all bridges with Arteta, think he’s got potential and is definitely one for the future after he gains managerial experience elsewhere.

Good old Arsenal transfer drama! As we cannot get Messi, Neymar, Salah etc. neither can we expect to get our hands on Guardiola, Klopp or Allegri. Especially when our team only has the forwards sorted out, no CL football and we finished 6’th. Not super attractive if you ask me. Considering our current situation I’m actually delighted that Emery will be joining us at the Emirates.

Only concern is burning bridges with Arteta, who it does seem will be a stellar manager someday (maybe even this season) and would hate to not have that as an option in the future because of the way we handled things.

I think the board should contact him and do a proper explanation to calm his nerves. It will be wrong for him to nurse a bruised ego against the club going forward. It was a real mess but the right decision in the end (at least for now).

How do you know the board hasnt been in contact with Arteta ?
I would have hoped the board had told Arteta what the situation was and how the club was to move forward when they had talks. There is no way “dick” Emeri would have agreed to be manager if this wasnt so.
It seems to me that Arteta was the one who demanded things. Is it then Arteta who needs to explain why. Especially for someone who has no managerial experience.
Its good enough for Emeri but not Arteta

i would think even he knows that there is still time. Get some experience then perhaps in a few years (or months 😉 his time will come.

Noone knows the real story here. I am of the opinion Mikel turned the role down because he couldnt get the control he was after. and I dont blame him. If his job is determined by results, and he cant have a say in the players he wants to help get those results, I would give the board the big finger as well.

Plausible. But in most clubs now the manager’s role has been downsized to that of a coach. Arteta would do well to start off at a smaller club and build up a body of work. Then he can have what he wants at a big club.

Exactly. The risk of it all blowing up 3 months in, where he ahsnt got the control he wants/needs… could be devestating for his career. Cut his teeth at a small club like Spurs, then come a knocking 🙂

If Arteta actually did pull the plug I would consider that a very smart move. This is one of the situations where someone inexperienced like him is better off being the guy After the guy after Wenger, and chalk up some experience in the meanwhile. Objectively, Why take such a huge risk, with a rumored limited amount of support (transfer cash, etc) and battle all that comes with following a club legend, only to potentially put a big dent in the career you’re just starting? I’d love to see him join fellow Basque Emery’s staff (maybe bring along his buddy… Read more »

I think I would have preferred Mikel

Here we go, fans already working on the what might have been instead of reality. A bit like Welbz/Cech/Ramsey, or whoever else was injured at the time, would have been our saviour, but then ridiculed on their return for not being good enough. A bit like Arsene who was close to signing Ronaldo/Messi and any other current star but never did. If we’d taken Arteta, the board would be crucified for not getting an experienced manager, now we get experience, you want the opposite. Decision made, let’s get behind the club and do our bit to make it work. Welcome… Read more »

Here we go, strap yourselves in folks. (genuinely excited by the way).

I think it’s a good appointment. For years I have wanted someone to give the players some tactics when they go out on the pitch and by all accounts Dick Emery does that.

Also feels like the beginning of a new age as well in that we’ve got a coach who has his own website.

Genuinely chuffed we’ve got him in the door, wish him all the best. If he does come in, we can expect him to fuckin’ paste Tottenham, the cheap bag of Tesco spuds those scumbags are. Fuckin dimwits the lot of them.
Hope they get relegated like Stoke, the bunch of bent spoonsthat they are.

Love your username and the rant about spuds was hilarious

Welcome. If you sort out Mustafi and Xhaka then half the battle is won.

you forgot to mention ozil

So will we play at the Emery’s Stadium from now on?

Wow! This never struck me. Indeed an apt replacement after losing Arsene from Arsenal.

Unai both know it

When we’re winning the banners will be “Fly Emery”

Hats off my friend, hats off!

Is it just me, or is there a bit too much of a Don Corleone vibe coming from this splash page…

The horse head in your bed may be the answer to your question!

Bit underwhelmed by this appointment to be honest..would have much preferred an exciting Arteta move. One to save Gazidas’s ass me thinks

I thought communication wasn’t going to be a problem

If reports are true that he got the job because he had in depth knowledge of the squad and he is meticulous in training and game preparation then this is a great appointment. The players need structure and guidance and he seems to be the right person to bring this about.
Looking forward to the new season. Hope we can give him some time to settle in and support him fully. COYG.

I hope he is going to build the team around ramsey

I wonder if he is a distant relative of Dick Emery. His team talk would be like Wengers… ooh you are awful but i like you !