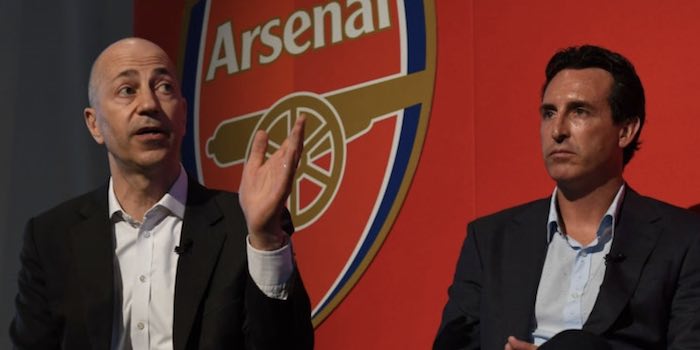 Ivan Gazidis says that there will be more transfer market activity this summer as Unai Emery builds a squad to compete in the Premier League next season, but insists that the Spaniard will uphold the Arsenal ‘values’ of developing young talent.

The chief executive was speaking at a Supporter’s Q&A event last night where the new head coach was billed as a ‘special guest’, and he says that the new team involved in making transfers happen – from targetting players to them signing their contracts – will ensure that Emery has the players he needs after detailing where he feels the squad needs investment.

“We really have a collective effort now, in terms of how we identify players and then how we take forward our interest and of course Unai is a huge part of that as well,” said Gazidis.

“This is now a different way of doing things, one with a very, very accomplished team of professionals who we have spent time bedding into the club.

“Unai has been in the thick of that process in terms of what we need in the squad, we’ve signed two new players so far this summer and there will be more to come.

“At the same time we have to manage the squad that we have, but by the first game of the season, we hope that Unai has a squad that he has had time to work with and a balanced squad that addresses all of the needs that Unai has identified.”

Gazidis also confirmed there would be some departures, and went on to inform attendees that he’d given the former Sevilla, Valencia and PSG boss a crash-course in the club’s values.

“We spent an hour earlier today just talking about values and what Arsenal represents. One of the long standing traditions at the club is in developing players and that’s one of the things Unai has done throughout his career.

“We spent a lot of time behind the scenes over the last few years developing our academy, our academy at Hale End is unrecognisable from how it was a few years ago.

|We’ve got new leadership in the academy now with Per Mertesacker and Freddie Ljungberg managing the U-23s.

“So there is tremendous energy, not just in this room and with Unai, but right across the club.”

Buzzing for the next season. Bring it on!

Bless you! the 0-3 defeat to Citeh will bring you down to earth.

If that is seriously what you believe, why even bother supporting (presuming that you do, being on an Arseblog). With a new manager, addressing many of the concerns that fans themselves had reiterated until they were blue in the face, doesn’t instill a bit of hope, what does? This is potentially a great team that has underperformed, now is a time to be optimistic. No harm having an option but this shit gets tiring.

Why not a 3 – 0 win ? With a good defensive display, South Korea beat Germany. I am not comparing us to South Korea. I am trying to say if we do not play the careless full attack played under Wenger, we can beat them.

Troll but I did laugh at the level of patronising with “Bless you”. 😀

Am I The only one naive enough to think that we can actually win against City? We have almost all our player home from the World Cup now. While many of theirs are still fighting.

You know what? Even if we do lose 3-0 to City on opening day, I am excited to see HOW it happens. If it is the same stupid mistakes or game mismanagement or lack of tactical awareness or [insert problems from the past decade] then I’ll feel right fucked off and brought “back down to earth” as you put it. But if we did what we needed to do correctly and were simply outclassed by better play then hey, THAT’S OK WITH ME. We aren’t the best team in the league, not for a long time. It’s the HOW of… Read more »

The season is 38 games and 9 months long. If we lose to Citeh, it only gets better from there.

Why so negative? We all know that on our day we can beat any team – the problem is that ‘our day’ has become all too infrequent. What we *might* have now is a manager who can make ‘our day’ more every day… you never know! But equally, these things take time – especially with the players that have had years of the old regime…

Onwards and Upwards for The Arsenal!

All sounding good, with a lot of pedigree performers working together.

Once we’ve won the first two PL matches we’ll all be a lot happier.

Wow that’s a lot of positive talking. Time will tell if the new structure in place will prove successful. Ivan talks a good game, now it’s time to deliver! Patience will be required.

We do have some excellent prospects so this must be music to their ears too. A clean slate for players like Reine-Adelaide, Zelalem, Akpom, Mavididi, Bielik and Nwakali (hopefully). Factoring in Sheaf, Amaechi, John-Jules, Gilmour, Smith-Rowe on top of AMN, Nelson, Willock and Nketiah, it’s clear we could have a strong injection of youth coming through. Clearly not all are going to make it here, and it may be too late already for a couple, but they will have chances to impress and it’ll be interesting to see who makes it.

Nwakali is a huge talent.

He only play well in division 2 in the Netherlands !

Be careful not to ignite.

You win this thread, purely for the username, genius

Akpom is done too old for youth prospect. I am sure there 15 to 20 players younger than him at the World Cup. I would limit the list to AMN, Nketiah, Nelson and perhaps Bielik for now.

Werner, Lozano, Pavon, Sarr, Wagge, Dembele, Mbappe all younger than Apkom. We’ve had Anelka, Henry recruited younger. Fabregas, Theo Walcott, Jack played for first team much younger. Hope Apkom is one of those who break through late but it is too late anyways.

He must be said that 18-year-old players able to be very good or good at this age are not legion.

They are by no means the norm but rather exceptions.

Off topic, but does anyone else think that unai looks like Matthew mccounaghey?

Yup I’ve thought they looked alike ever since Emery joined us as our new head coach.

This really is the mother of all pre-season, for the players- the youngsters, the loan ‘stars’, those who have fallen out of favour, those in the last year of their contracts. The mana…sorry head coach to assess them, see who he wants, see who he doesn’t, and look for internal or external solutions for the latter. Lots of ins and let’s not forget, outs and I think our new behind the scenes ‘team’ are really going to earn their keep. Really like the fact that the transfer window shuts before the first match, so then we can focus on the… Read more »

We still need a big player in attack. We are one player away from being a force in Europe.
As it stands we have a good core in Laca, Auba, Ozil and Mkhitaryan. I still think we need one more player at this level to compete on all fronts.

All we need is a winger (Gelson, Forsberg, Mahrez etc)….
However I think there are more pressing areas than a forward i.e CB

We are one injury away from having a bang average strike force. I don’t care if it’s a CF or a winger. We need another goal machine. Might aswell go big this summer and keep the powder dry next summer.

Lacazette and Aubameyang are two of the best strikers in Europe which is prettty good in my book. We have Eddie as an exciting back up and Welbeck too

We are no better than Liverpool with Mane and Salah, United with Alexis and Lukaku or City with Aguero and Jesus. These teams no doubt will improve their attack this summer. This is the perfect time to go out and get another player to complement Aubameyang and Lacazette and no it’s not Mkhitaryan or Ozil. What we need to do is change to 3 at the back to accommodate Mkhitaryan/Ozil and play 3 strikers. All our players are on long term deals. It is time to go big in the market even if it means we don’t spend much in… Read more »

I agree with you.

For that, they would need one or two season of transition as Guardiola does to City.

He must be said that 18-year-old players able to be very good or good at this age are not legion.

They are by no means the norm but rather exceptions.

Emphasis must be on shipping out the weak midfielders & both centre-backs & wing backs. Regardless of how long they have been at Arsenal. Recent seasons have shown they just are not good enough. Then some decent recognised players to fill the gaps and a positive game plan. Good decision to offload Wilshere.

As usual lots of Ivan-speak. But I’m really looking forward to the new season with all the changes. COYG!

These things have always sounded good -even under Wenger. The main difference between now and then is that the words the effect of the words under Wenger started to lose their impact over time as it became more apparent that we need a fresh approach. Just hoping that such words can manifest into results.

Unai must make a pact
We must bring salvation back,

I’ll reach out my hand to you
I’ll have faith in all you do.

Just name the game and I’ll be there.

Should read U ‘n’ ai must make a pact.

So excited about next season. The knowledge he has of our players already is phenomenal. It looks like the Stat DNA thing we own will be right up his street too, something we’ve only used for scouting. His attention to detail should make us feared once again. I’ve got a big grin on my face as I write this.

Definitely some new energy around the club and excitement for the new season. I just hope supporters are patient as things aren’t going to be fully turned around with the first match, but will be a gradual process throughout the year.

The new look Arsenal is shaping up nicely. Reminds me a lot of 89 . I’m truly excited about the season for the first time in a while

I know everyone gets excited at purchases and the quest to buy even more, such as the addition of Banega, but I really hope people remember that squad space should also be given to youth. Guys like Eddie, Nelson, Beilik and the returning Jeff and maybe even Martinez (though he’s not youth, and I think we need to start blooding in Virginia as our long term GK successor) can all play an important role in our season. I know guys want a midfield of; Xhaka, Ramsey, Elneny, Banega, Torreira, etc. But hope along with AMN, someone like The Jeff (who… Read more »

Do you realise that the focus on developing young players is to cut costs..?