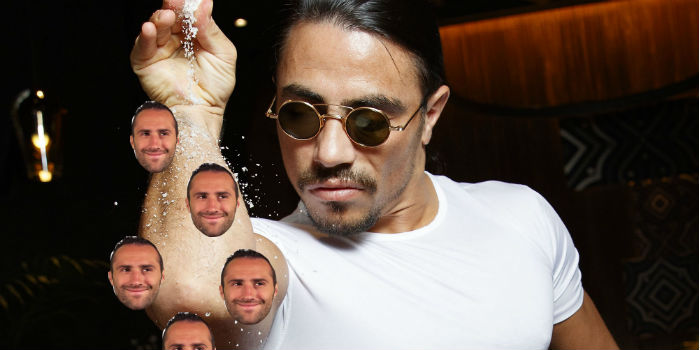 Would you believe it? David Ospina has been linked with a move to Turkey. Again.

Reports from Turkey *cough*, claim the 29-year-old has been offered to Fenerbahce’s new sporting director, Damien Comolli, via third-party agents. Quite what that means, we’ve no idea. What’s his actual agent doing?

You’d think the Colombia international was born in Istanbul, so regularly is he tipped to sign for one of the Super Lig’s top clubs.

There are loads more stories tipping him to quit the Emirates, including links with a return to Nantes and a move to the MLS.

And yet, Dave never leaves. In fact, you rarely even hear him complaining about his circumstances at Arsenal, despite being ensconced as the team’s second choice keeper behind Petr Cech.

Will he go this year? He might. After all, he’s only got one year left on his contract and we’re being heavily tipped to sign Bernd Leno from Bayer Leverkusen.

That said, the Turkey links…well, we’ll take them with a pinch of Salt Bae’s finest.

no idea where he would go but if we do sign a new keeper (seems likely), I can’t imagine Ospina is willing to be 3rd string next year. Cech arguably is a better keeper, but certainly is much more experienced / successful = you want to keep him around to help mentor whomever we bring in. The defender situation is a little more interesting IMO. If we have the 2 Greeks, Chambers, Holding & Mustafi we are still too heavy there. If we bring in the Turkish guy we keep being linked to I wonder if both Mustafi & Chambers… Read more »

Kos isn’t that old (32, 33 when he returns), and the surgery on his achilles plus an extended period of rest may actually help with his long-term achilles problems. It possibly could actually extend his career. On the other hand, it could go the other way so it would be too much of a risk to count on him in a group of 4 centre backs, but as one of 5 it would be reasonable.

I believe Holding needs a loan spell and hopefully we sign another centre back so we can dump Mustafi. Sokratis, Chambers, Mavropanos, Soyuncu, Koscielny.

Mustafi has height, speed and power. He also lays decent passes. And he is sometimes a terrible ball-watcher.

I think he is good to have in the team. If Arsenal are really looking to get a defensive game (clear defensive roles, division of labour) he could florish.

But I agree – we don’t need that many defenders.

Mustafi, is that you?

You have some real unknowns there, really risky. What will Kos be like when he comes back? How will Sokratis fit in with English football? Mavropanos and Soyuncu are far too young to be relied on and Chambers has been hot and cold.

If Mustafi goes we need a top quality experienced replacement, otherwise central defense is going to be a disaster zone next season in my opinion.

Mustafi should stay, we all know there’s a solid defender in there- but as with every player that’s played for us over the last ten years he needs coaching to improve not stagnate

I’m just about sick of these stupid rumours. They should tell his agent to find him a club, asking price is £5m, if he can’t guarantee then ospina is third choice keeper next season. If he’s so happy with his wages at arsenal and would prefer that over regular game time then fair play.

Leno is a bad choice. Leverkusen are happy to sell him as they’ve just signed an unknown Finnish lad -Lukas Hradecy. Thos does not bode well for Bayern’s faith in him or his ability to improve.

Leno reminds me of Mignolet. Always, always has a cock up in him. If it is to be him, the positives are he’s young (26), highly experienced and cheap. Butland wpuld vost twice as much and isn’t twice as good.

Oblak would be the dream signing, but we couldn’t afford him or possibly attract him?

Trouble is it’s very difficult to predict how a keeper will perform in a different setting. We know from experience that a keeper can look a bit flaky at one club, but excellent at another. I’m happy that we’re getting a new GK, btw. That could be a huge factor in Leno’s progression. Also, a better, more structured defense!

Exactly. We should’ve been in for Hradecky or Parvlenka.
I repeat while Leno is an upgrade on what we have, we can do much better for even lesser. They’re at least 5-6 GK in the Bundesliga that are better than he is.
People want to point to his potential when he was younger but the truth is he has stagnated majorly.
Anyone who really watches the Bundesliga would tell you as much

Ya gooner
Reply to  Trez

“Always, always has a cock up in him.”

A P
Reply to  Dan-Axel Zagadou

It’s tough to play well with a cock always up in him.

He was going to leave last season but Bayer Leverkusen managed to hold onto him for another season. They know the stature of their club, don’t have the finances even small premiere league clubs get, so it’s part of their business model to develop players and sell them at the right price. The replacement goalie cost them a third of what they’ll get for Leno. Fair play!

I’d rather assume that his agent is well connected there and he leaks Ospina stories to the local newspapers. I don’t know Turkish media but I don’t think they’re much different from the European sports newspapers.

I think he just loves doner kebab, but since there are good shops in London, he can’t quite make up his mind about leaving.

I think Ospina is better than Cech now, and should have started in the league after Cech passed the ball to Cesc, but for all his mistakes Cech has been the managers favourite. Hopefully with the new manager we will have a team selected on merit, not reputation and favouritism. I’d back David Ospina to do well, he did very well before Cech came in.

If Leno arrives, it will be a case of holding onto a mentor / PL veteran while blooding the future. I don’t mind Ospina, but I don’t think he figures in SMEG’s plans.

Disagree. Cech hasn’t been great but he also hasn’t been as bad as has been made out. His better performances last year were still very good, and maybe show he can still play at the required level with more focus/better coaching (?), but he was patchy as hell overall. Deserves to be shunted down to second choice but no more. Ospina just exudes panic. He has no idea how to control his box and his handling is poor. Even easy, floaty balls into the 6 yard box, it’s a crap shoot what the outcome will be. He’s an OK shot… Read more »

Exactly this Public Elneny. Cech is past his best but still unquestionably better than Ospina. Our defenders clearly don’t trust him….
And Ospina didn’t do very well before Cech came in. He did ok-ish, which is his level really. I know get little about Leno but I find it hard to believe he won’t do better than Ospina.

PodB
Reply to  Kwame Ampadu Down

Jay Leno is a better keeper.

Distribution within 30 yards as he can’t kick it further. He also excels in pretending to be injured then miraculously recovering

yeah he was shit when we beat Chelski in the FA Cup final … bring back The Fab … second best keeper in the league.

Kwame Ampadu Down
Reply to  PodB

The FA Cup final where he made a massive howler in the first half but got lucky that it dropped to one of our defender’s and then in the second half, let in Costa’s equaliser when he should have made a routine enough save. I assume you were being sarcastic but yes actually, he was shit in that Cup final.

PodB
Reply to  Kwame Ampadu Down

funny how he made a match winning save from Costa as well late on. Forgotten that have we? All keepers make mistakes. See De Gea today v Portugal.

Cech may have regressed but he is still a class above Ospina. He has the presence and his positional sense is considerably better and he is far less error prone. I firmly believe that had Cech been in goal in the Europa League we would have won it.

Nonsense, Cech made more errors that led to goals than any other keeper in the league, and his distribution is awful. Ospina has better reflexes and is better with the ball at his feet. there are stories about Napoli wanting Cech, we should sell him and get his wages off the bill. We have a proper goalkeeping coach now, we don’t need a mentor.

They can both leave

What happened to the poo-meter?

It broke, the Arteta to Arsenal rumors destroyed it.

Not sure who’s the biggest liability but I think I prefer to keep Cech….Just.

It’s time for him to leave. I was honestly surprised he stayed this long and was content with being second choice. Think we should’ve sold him earlier and used Martinez as second choice.
Good keeper but unfortunately was training under a terrible goal keeping coach.
Wish him all the best

Kwame Ampadu Down
Reply to  Trez

We tried to sell him earlier to be fair. There just weren’t any takers.

Mustafi makes a lot of mistakes but has the odd game of class. I just wonder if a spell with a proper defensive coach and a manager who actually takes defence seriously if we could have a great player. At the moment though he reminds me so much of Titus Bramble….having a great game and then something switches off… .goal!

Its not an issue if Ospina should elect to stay.

Its not a need for him to be moved on unless there is a significant upgrade.

I quite like Ospina, he does have his faults but I think a lot of his issues such as box control are down to not having an extended run in the team.
That said, I don’t see a benefit to keeping him on as a backup keeper when a younger player would gain more from it. Honestly if we can get 5million (push for more) then invest portion of that in a young lower league keeper then we’d be taking a step back towards the successful arsenal of the past