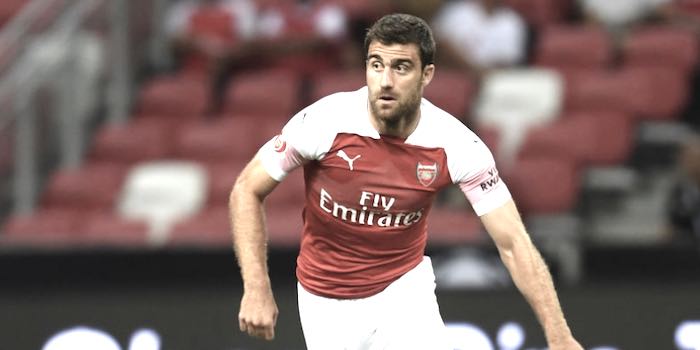 New signing Sokratis Papastathopoulos says that 30 is the best age for a defender and that he’s ready to pass on all the experience he has to the young players at the club.

The Greek international, who has played for Genoa and AC Milan in Italy, as well as Werder Bremen and Borussia Dortmund, was brought in to add some steel to a backline that was porous, to say the least, last season.

He is sure that everything he’s learned during his career can help make the Gunners more defensively stable, as well as helping to develop young defenders like Calum Chambers, Rob Holding and Konstantinos Mavropanos.

“Thirty is the best age for a defender, so for the next three or four years I would like to give everything for the team,” he said.

“I want to win with this team. With Borussia, with Milan, with Genoa, for 10 years now I have been outside Greece and of course I have experience.

“I feel very good and I’m working on the pitch and also off the pitch to help all the young guys to be very good with us. I learned a lot and now I am ready to give what I know.

“I am here to show I am first a defender and after that comes everything else.”

And he says new boss Unai Emery is working hard to ensure that Arsenal are more defensively stable.

“A lot of coaches and a lot of teams now look at only how to play, not how to defend,” he continued.

“But with the new coach we work also on the situations when we don’t have the ball and this is very important.

“On the first day, the coach worked on this. With him, all the players we work on tactics, we look a lot at videos, what was wrong, what we have to do better.

“I think and hope this year things at the back will be much better.”

Certainly the 30 years or over idea for a defenders best years certainly works at Juventus. Seem to read the game better, better decision making, positioning what with all those years of experience. Hopefully, the same for Sokratis. Was a bit underwhelmed initially by his signing, but it’s growing on me

We were very poor at the back last year so have to improve. Look forward to seeing his best years, fingers crossed.

I can’t imagine us doing any worse than last year in terms of defence (touch wood).
Good luck Papa!

Its not the age that concerns me.

Its the mobility. He looks heavy. Against quicker opposition (City with Sane-Sterling-Mahrez), we may still be vulnerable.

Hopefully he’s positioning is good like Per and he acts as stopper with Mustafi sweeping (last season’s highest in intercepts) but I suspect the way we play always going forward holding possession, we are vulnerable to counters and we need quick feet at the back (ala Koscielny)

Papa, is heavy and seems flabbergasted at the quick movements of balls around him. He looks penalty prone. You are right, quick players would elude him. And it looks more as if dishing out instructions to members of his defence is more important to him than the actual defending. If the semis against Athletico is anything to go by, I’ll prefer the much improved Chambers to partner with the error prone Mustafi, to cover for some of those errors. If not for the new boy Gwenzhi, that defence comprising papa, mustafi, were overran by PSG starlets. Papa, needs to gradually… Read more »

Guendouzi is a midfielder…