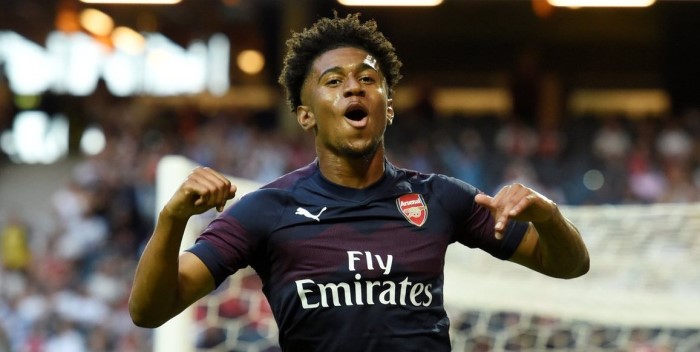 Hoffenheim boss Julian Nagelsmann has confirmed his desire to sign Reiss Nelson on loan from Arsenal, but insists the deal is not yet done.

One of the sticking points may be the conclusion of a new deal for the 18 year old as the Gunners want to secure his future before giving the green light for the departure.

The club have been trying to tie him down to new terms for some time now and hope to bring things to a conclusion this week, at which point he can spend the 2018-19 season with the Bundesliga outfit.

Speaking today, Nagelsmann said, “We’ve taken an interest in Reiss Nelson, I can disclose that, but nothing is set in stone as there are still things to clear up.

“If it all works out, we’ll have a player with great pace who can do a lot with the ball.”

The transfer window for clubs outside England closes tomorrow, although loans can be made to Football League teams, and it appears that Nelson is going to be the only departure of note despite rumours involving Alexandre Lacazette and Mohamed Elneny.

For more on Reiss Nelson and this potential move, check out this Arseblog post.

So glad we’ve got so many options out wide this year we can afford to send our most promising one out on loan.

Well we did that with our best centre half

I meant available and please tell me which centre half playing is better than Chambers.

So initiating contact with Naggeldman in the process? Perhaps in 3 years time after Unai steadies the ship?…i always wanted him as the successor to Arsene but dont think he is ready yet for Arsenal

He already put pen on paper for Leipzig, so…

@LVACC… hence the 3 year’s time, after he wins the Bundesliga with Leipzig and proves himself as an winner.

No way Alexandre Lacazette and Mohamed Elneny should be going anywhere, especially Laca.

Sounds a good move for Nelson, get his experience up. Will get his Horatio of playing time higher than if he stayed.

Was your Horatio an intentional pun?

Either that or his pred text has a fucking odd vocabulary.

Makes sense with Nelson. Couldn’t think of a Column joke.

Why suggest that Lacazette or Elneny are leaving? Ignore the fake news about Lacazette.

I was hoping we’d get rid of Elneny, he’s average at best.

Thanks for the update Julian.
And heaven forbid anything goes wrong with Emery in the next few years, but if it does, it’s good Julian will have a lot of experience with Nelson, as I will help in his transition as future potential Arsenal boss.

Emery is top class
Cheers to another 23 years of Unai Emery ?

What? You know he’s set to manage Leipzig next season, right?
And when you start working for Red Bull you can’t just leave. They force 25 Red Bulls into you everyday so you can’t sleep. Work work work. And when theu feel they’re done with you, the put you in a small storage space with an actual bull for a week (bulls get hungry). Try and get out of that one.

“Try and get out of that one”

Pfft, easy. Red bull gives you wings, so he’ll fly his way out of there.

Baffling decision if he goes on loan considering our options in terms of wide players. Nketiah is a possibility in and around the squad as is Smith Rowe but Nketiah is more an out and out direct player where Nelson provides a good balance of guile and pace out wide and thereby goals and assists. Don’t know what it will serve us for him to go on loan. We need more options on the right without over committing Bellerin. Mhkitaryan is not an out and out wide player with any pace either. One option maybe to use Bellerin and Lichsteiner… Read more »

Elneny is far better than average and is more than a useful squad player who seldom lets us down. I guarantee if he was on the market there would be plenty of offers

Well, it was widely reported that Elneny WAS “on the market” over the summer but guess what; he’s still here… I don’t necessarily agree that he’s average but lets not kid ourselves into thinking that he’d be snapped up by any of the other top 6 sides in the Premier League, let alone a top European club.

Well he signed a new contract. That’s probably sufficient to keep other clubs thinking they would be priced out