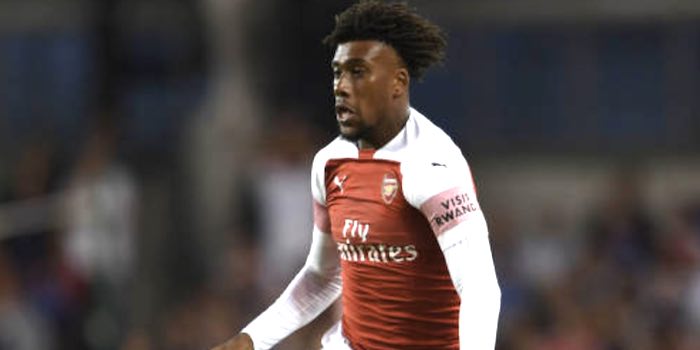 Alex Iwobi today signed a new long-term deal with the club, and says it’s a continuation of a childhood dream – to represent the club he supports.

The Nigeria international is an Arsenal academy graduate, having come all the way through the ranks after joining the club as a 9 year old, and he hopes that his progress can inspire other youngsters at the club as they look to make a career in football.

Speaking to the official site, the 22 year old said, “It’s always been my childhood dream to represent Arsenal. To get an extended contract is an amazing feeling and I hope I’m doing the Arsenal family proud, as well as my family.

“The first kit that I had was Arsenal and long may I continue to represent them.

“I always realise that I have to be representing the team and giving 100 per cent at all times. It’s not just myself or my family I’m representing, I also represent the people and the younger generation as well.

“To actually wear the Arsenal shirt and walk out at Emirates Stadium and see all the fans is an amazing feeling. The very first kit that I had was an Arsenal shirt, and I’m still as honoured and proud to wear the shirt today.

“I can’t wait for that to continue.”

Like many young players before him, Iwobi was a breath of fresh air when he broke into the team, but has struggled to find consistency at times. Hopefully a new era, new coaching and knowing his future is secure can help him kick on again.

Also, despite having an up and down season last time out, he ended up with 5 Premier League assists (7 in all comps), which was more than both Cesc Fabregas and Eden Hazard.

There’s definitely room for improvement, so let’s hope we see that in the upcoming campaign.

Top lad. Pretty sure he’ll be one of several players who kick on under the new regime.

I can’t think of one reason why Arsenal would extend Iwobi’s contract. His performance in the World Cup for Nigeria was indicative of the underwhelming nature of his game time for Arsenal. No real end product and a deluded belief in his own ability.There has been absolutely no news of any other team looking to recruit him. Poor management has meant that a large number of Arsenal’s squad have been able to run down contracts. Yet the way in which the Club has happily renewed those of Elneny, Xhaka and now Iwobi despite the fact that none of them had… Read more »

People tend to choose to see what they want to see. All this accolades for Smith Rowe against Chelsea, frankly, in the short time that Iwobi was on the pitch for us, the young Nigrerian was WAY MORE effective in instigating play for us from the left. He was at receiving end of unfair criticism as well last season and his faults again over exaggerated. Toward end of season, he was extremely effective. I can’t remember opponent but I believe we scored five and out of which 2 or 3 of the goals were clearly situations created by Iwobi or… Read more »

Remember a video some time back where he said Jay Jay gifted him his first and it was a Bolton Wanderers jersey.

I think he means the first Jersey he represented, rather than the first he ever had

Currently the captain of the thorough bred players in Arsenal. Keeping him is symbolic for the youth team

A long way to go to convince many fans he has what it needs to succeed at arsenal.massive season for him. Im sure many will improve under the new regime as we had such piss poor tactics and direction at times under wenger it was hard to blame the younger players.
Hope it works out for all.

As if he was guaranteed starting place last year – unused substitute 10 times.

Emery is the coach now. Move on! How long will you shit on Wenger. I’m thankful for all he did for the Club.

He is a huge talent which I expected to blossom last season. It did not quite happen, but hopefully a slight change of role and a little bit more agressiveness will release his potential.

Iwobi could still become a great star (he also did mot mention money in the interview, only loyalty and tradition. Despite this modesty, I still think the club should pay his bus tickets, so he won’t have to hitchhike to training).

What are people’s thoughts on his best position?
Wide player making the ‘pre’ assist’s and contributing with goals and protecting the ball or a santi style midfielder in a midfield 3 which Wenger seemed to experiment with?
If we don’t get a Dembele and hopefully don’t go Aubameyang wide id like to see Iwobi make the left his own…

Imo he should play CM. Better than Arteta in ball retention and he has this ability to dribble his way out of tight situations and he also covers the ball very well.
If he can work on his positioning and tackling for couple of seasons I can see him becoming a full fledged central midfielder.
I say this because end product is not his thing.
I think Eddie and Smith Rowe are the only players from academy with good end product.