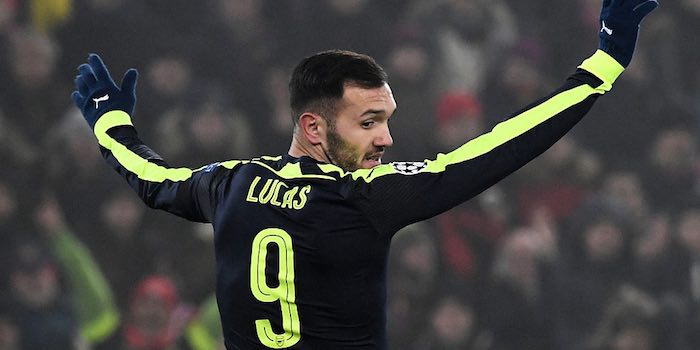 Lucas Perez has thanked Arsenal and Arsenal fans after his time at the club came to an end today. The Spanish striker joined West Ham on loan, linking up with former teammate Jack Wilshere, after two seasons with the club.

In total he made 21 appearances for the Gunners scoring 7 goals and making 5 assists. He bagged a Champions League hat-trick against FC Basel, but never convinced Arsene Wenger.

He spent last season on loan with his hometown club Deportivo la Coruna but couldn’t help them avoid relegation. The 30 year old went for a fee of around £4m, much less than the £17.5m he cost two years ago.

Today I would like to thank Arsenal fans for their support, they always showed me affection and love from the first time I arrived in London.

I also want to give thanks to my teammates and to the staff of this club for giving me the opportunity to make my debut in one of the best leagues in the world and win the FA Cup.

I wish you all the best for the future and I hope you can go on and achieve great things.

He was a decent player but having been considered not good enough by both Arsene Wenger and Unai Emery, perhaps he’ll find West Ham a better fit.

Best of luck to him, especially against Sp*rs.

I always thought he was better than welbeck. But thats just me.

Not just you. I’ve long felt he never got the league chance his cup form deserved. Best of luck to him.

Me two…me 88 rather! But despite my best efforts to be a fan of “Wele”, I guess I’ll always be subconsciously/unconsciously against him for he had been rejected by that Manure crowd first. 😐

I said it before, I would have kept him and sold Welbeck. but that is not me managing Arsenal. Unai knows!

I hear you but do you bench Micki ?

I like Danny; always busy, always buzzing. Lucas maybe is more clever & experienced & his finishing is certainly better than Danny’s. I like a player with a big heart & that’s what you get with ‘Everything But The Goal’.

Welbeck has been told, he can leave also.

Welbeck, Ospina AND Elneny on sales list along with of course Campbell and world class Jenkinson.

At least Campbell and Jenko didn’t cost us much.

Perez we took a massive hit.

Final sales prize at 6.5m That’s one third the price we paid which is I suppose armotised about right since its 3 seasons in with one left to go plus not a performing player.

It is a business, but you read too much into numbers. Balance between players affects each player’s respective value to the team–finding chemistry is the real goal, not investing in players and making financial returns.

good luck lucas, hope you do well, you are in good company with jack there

Thought he had a touch of class, could finish and given more of a go, could’ve been very handy for us

Just got one question are we linked with any player or is it going to be a boring Transfer Deadline day?

Why are you saying a loan deal Blogs, surely he’s been sold ?

Good luck to him, not sure what happened between him and Wenger, but Emery has had a good look and decided he’s not what he needs and the £4m fee says it all really.
Shame all the same but I hope that he enjoys his time with a Jack at West Ham

I know it’s juvenile but still….your name PWNS yo! Also, do you mean to say that this bloke will CONTINUE to BE 29 UNTIL he turns 30? And that he won’t ever be 29 again when he does indeed TURN 30?!?!

Think we have milked this age gajabuja comedy to death, afterlife and even to its reincarnation(s) now. 😛

Shame it never really happened. All the best at West Ham and say hi to Jack.

7g and 5a in 21 apps is a decent return, even considering the quality of the opponents.

Good luck to him at West Ham. If Emery had truly rated him he would have kept him. Welbeck is a frustrating player to watch, but let’s not forget the important goals he scored in the Europa League…or doesn’t that count any more?

West Ham are continuing their tradition of signing our unwanted players, although this time around I would have preferred we kept both…

Let us wait and see if Welbeck goes as well, if he does, I doubt that Emery will consider Nketiah as our 3rd choice striker. Could be another striker on the way..

He’s a good player by my rating buy the manager knows better. Good luck to him and west ham United especially against Spurs shit club

Blogs: referring to him as a “decent player”…? Honestly, that’s talking some sh!t.

Still 4m is too less

Its nothing personal but im glad the club are slowly getting rid of the players they don’t want. if their not gonna play then move them on and hopefully learn from this. No more stocking avarage players on big bucks that have a tiny sell on value.

Good luck to him, impossible to tell what impact this will now have on AFC, if any at all, but still sad to see him go. Very strange times at Arsenal these days, I sincerely hope for positive outcomes for us all ??

I’ll echo the question of why him and not Welbeck but add a couple more as well: Why so much money on Sokratis and now talk of Vida (whom Arseblog correctly notes is more of a journeyman), when all that money (sum total) could have been used for arguably better and younger defenders? [Think someone like Lascelles — though I understand he turned down a move to Chelsea] Sokratis seems past his prime and Vida, while he had a good world cup, hasn’t consistently performed in a way that suggests that he is a top defender. Why was Chambers sent… Read more »

Reunited with Jack, West Ham, Everton and Fulham this season big spenders amongst the rest.

Lets hope its a good season for all of them.

Welbeck is the more useful should he stay bc of height and power.

He gives us something different.

TBH Perez would be similar to Laca.

Ospina has to be moved or loaned.

Campbell too. Jenknson nobody wants not even championship despite his world beating ability to ‘whip in crosses’.

Welbeck and Elneny if no takers we can still use around the squad.

Here’s a weird one. He came in to check out my east London gym, presumably to avoid whatever horrendous facilities west ham have on offer, and I was stood there looking at him and the transfer day headlines flashing on the screen above. I didn’t have the bottle to actually wish him luck but I caught his eye and he gave me a little smile. Seems a nice guy. Agree with everyone over here that it would have been good to see a bit more of him. Came up the tough way, may have had more on offer than some… Read more »