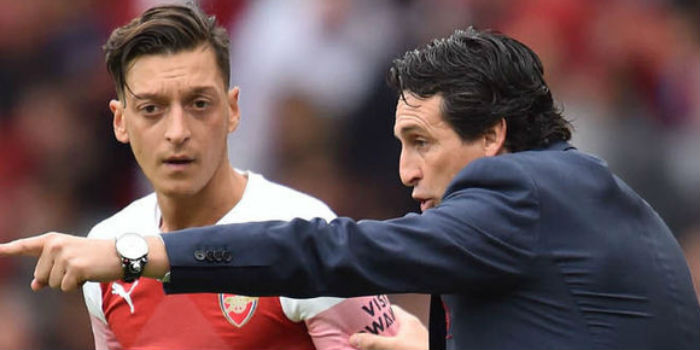 Unai Emery believes Arsenal and Mesut Ozil both stand to benefit from the midfielder’s retirement from international football although he accepts the player may have found it strange knocking about at London Colney during the Interlull.

Following a stressful summer that included becoming embroiled in a political controversy and his country’s shock early exit from the World Cup, Ozil took to social media to sever ties with the DFB alleging discrimination by certain individuals in its upper echelons.

Coach Joachim Loew suggested last week that a return was a non-starter, especially given the 29-year-old had refused to take his calls. It means Ozil’s sole football focus is Arsenal and for Emery, that’s a good thing.

“First the players have the habits to play in the international break, in important matches, defending their identity and when one player is finishing that, I think it is also good for them to focus only on their team,” he told his pre-Newcastle press conference.

“The reason for Mesut is important for me also, this focus every day with us, a relaxing three days off at the weekend. Mesut, like other players, works very well here and also working the ties and also together to improve things. Mesut, I look at him with the focus totally here.”

He added: “The first time, maybe, he could feel different [missing Germany matches] but every day with us in the work, I look at him and he looks well and happy, working with our demands every day.”

Just two weeks into the new season, there were rumours of a bust-up between Ozil and Emery. The Spaniard has repeatedly dismissed that suggestion and once again took the opportunity to underline the positive relationship he has with the German.

While at it, he also poured scorn on a story that claimed he’d told the Arsenal groundsmen not to water the pitch before the City game, a tactic that was supposed to slow down the passing of Pep’s team.

“[We get on] very well,” said Emery. “Here for me, it isn’t for a lot of the time speaking about what people are telling us. I have a very good relationship with Mesut and professionally I push him for improvements to give us the best in his qualities and performances.

“Also, I read this week in the newspapers in the match against Manchester City I say to the [groundsman], ‘Don’t put water on the pitch’ – it’s not true!

“This is the moment to say to you that I have a good relationship with Mesut and I didn’t say it to the groundsman not to water on the pitch, it’s not true. We are continuing our process with our positive things and our work.”

Wetting ourselves with excitement.

No, he specifically said no water!

Still time to get a cold

or hurt his back

A Different George
Reply to  afan

maybe he has got nothing on this weekend

Gosh! He really has to work on his new language. I miss arsene

I don’t. I love that Unai tells it exactly as it is, even in broken English, and gives the media no leeway.

I also like his bluntness. He could take some tips from Donald Trump. I don’t mean in any way that Emery should turn into a first rate twathandle but he could start calling out the press for #fakenews as he pursues his goal to #MAGA (Make Arsenal Great Again).

The problem with how Trump does it, is that he calls anything he doesn’t like fake news, regardless of its veracity. I would very much like it if Emery didn’t do that. Class is a big part of what makes Arsenal great and a lack of it is what makes others, as you so neatly put it, first rate twathandles 😉

Absolutely.
Though I have no doubt football managers will deny truth on occasion in order to protect their players. I’ve no doubt Arsene did it down the years too.

The man is learning the language. Let’s see how quickly you pick up a new language in about 4 months time. You can comment here in your new language, which I’m sure will be immaculate.

Why not
Reply to  Mann

Having learnt a second language already and trying to adapt to a third, the difficulty of learning a new language cannot be underestimated. Especially the confidence issues involved in talking in a new language, even amongst friends. Emery is doing it in much less time and in front of millions.

Deserves nothing but respect.

Mesut is not a diva. There hasn’t been an altercation with anyone amongst staff at his previous clubs, except Mourinho, with whom lots of Real Madrid players had issues with. He hasn’t even come out with demands at any of the clubs he has played at or his teammates, both at club and international sides.

Why did people believe Mesut would have an altercation with anyone?

300k a week I would look to sell him. I would look at the Chinese league for s big deal as I don’t think many others would be interested. Use the momey to reinvest. Push Ramsey further forward and move on. A very talented player but not sure we can afford the luxury and honestly think we’d be better off without

Who do you think drops deep to do the playmaking alongside Xhaka, when Ramsey moves into those forward areas to score?

Ramsey is not good enough as a 10 for a big team.

well, at least he is better than ozil

“Ramsey is not good enough as a 10 for a big team.” I wonder about this actually. Last season only two “big teams” consistently played 10s, Utd and Sp*rs, and for the most part they were Lingard and Alli respectively. I don’t think Ramsey is worse than those players at all yet both teams comfortably finished above us. However, those players fit their teams style of play so they performed well. I think it’d be more accurate to say Ramsey isn’t good enough to be a 10 for the way we used to play. But Emery has him at 10… Read more »

If we’re better off without anyone it would be Ramsey, taking too many touches, slowing things down and making those run from deep that leave the midfield wide open while he’s busy getting in the way of the forwards and trying to hog the limelight. His stats are 433 shots for 36 goals in the Premier League, that’s shocking. But hey, he’s the Welsh Jesus, so lets give him a massive salary in case we lose him for a free, I hope not.

There’s definitely an argument that Ozil doesn’t justify his salary (compared with his peers) and that is pay packet causes distortions in our wage bill. I’m not even talking about Ramsey, more Lacazette and Aubameyang who might think they’re actually more important to the team. This is a big reason why City didn’t cave to Sanchez’ demands and actually Utd potentially have an issue, with Pogba apparently not happy that Sanchez is on twice as much as he is. Of course on the other hand, if you sell Ozil you need to replace or better his quality, or totally change… Read more »

as I said before, it doesn,t matter if he plays for germany or not, because if he doesn,t want to play for us he wont

Just out of interest, what exactly are you afan of?

I noticed him quite a while ago and he is very clearly a troll. It’s not that he’s anti-Ozil, except that he apparently thinks that’s the best way to wind people up.