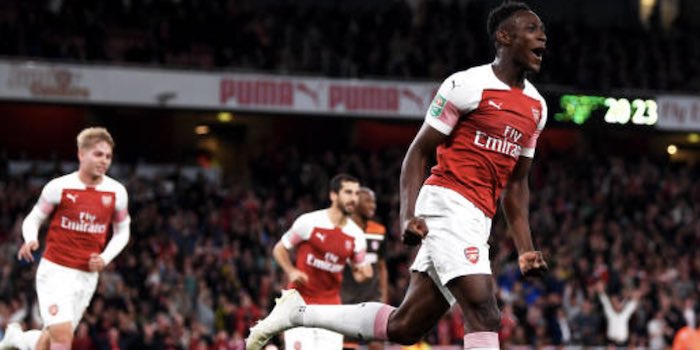 Unai Emery says he’s very happy with Danny Welbeck after the striker bagged two goals in the 3-1 win over Brentford last night, but insisted his at Arsenal is down to the club.

The 27 year old is in the final year of his contract, and could leave on a free next summer if new terms are not agreed. It remains to be seen whether or not a contract is on offer to the former Manchester United man, but so far this season he’s shown he’s a very useful member of the squad when he stays fit.

He’s level with Pierre-Emerick Aubameyang with four goals in all competitions, and adds depth and experience in the front three.

Speaking after the game, the Spaniard said, “There are three things when we are speaking about an individual. There’s the club, the player and the team, and my focus is the team.

I know they have last year of their contract with the team and they are working on speaking with the club, but for me, the focus is only on the performance in each match and every training.

“The performance and the commitment of the player is very high and also Danny Welbeck’s situation is one thing for the club and for them.”

As for Welbeck’s contribution, he highlighted the positives of having a competitive environment within the squad.

“I am very happy individually with the player,” he said. “He gave us his quality and also his commitment every day.

“Danny Welbeck is working with this commitment and when he is playing also with a performance like today, and I think he’s helping the team and we want this.

“Also, it’s more chances for us to find the first XI for the next matches with performances like today’s.”

If we have ambitions to finish above Chelsea or Sp*rs he is a player we would be tempted to want to upgrade on. But in reality, he’s a decent option if we have no intention of splashing out on the direct, 15-20 goal a season winger that we ACTUALLY need.

If he stays around while we continue to focus on breaking even in transfer windows then hopefully we can get the most out of him while Eddie improves.

Shame he didn’t get minutes yesterday.

Having Welbeck in the squad is very important. This is someone who can play across the front three and is very handy when needed. Not that he is happy on the bench but has a good attitude and is ready when needed. He might not be prolific but neither is Morata and he is strong.

He may not be totally happy with it, but with performances like that and his excellent work rate, he’s continuing to get the England call-up, and he’s got fresh legs on a regular basis.

Cup games, super subs, and a good share of rotating starts in the league at a club like Arsenal is hardly a terrible lot in life.

for sure, especially since he seems happy enough rotating in/out. I’d like to see Welbeck, Laca, and Auba as a front 3!

Mr. Sanlehi, tear down this wall

Remember Theo around contact extensions? If we want to be the best then we shouldn’t hand out contracts to squad players who won’t improve.

And now Arsenal has no natural wide player, which Walcott was and would be damn handy these days.

We need to give Eddie a chance too, otherwise it sends the wrong message to youth. But good points made in the article.

I want to see Eddie too, but the youth point is maybe a little invalid give Smith Rowe got a good run.

I thought Eddie might have gotten a sniff if we had gone three or four up but letting them back in the game squashed that notion.

The question is if Welbeck will want to stay on as (as of now) third choice striker. There are plenty of games in the season, and he will get his chances, but will that be enough. Having said that, the Emery system/tactics really suit him, and he’s our best option in the air. I hope he stays.

I mean if Unai chooses to stick with using two forward players in the starting XI Welbz will potentially be that utility man in the squad, fitting in as striker/winger and getting starts here and there as well as coming off the bench.

You have to admit, he seems to have fun chasing down tired defenders when he gets brought on! The other thing he must consider is will another prestigious club want to pick him up or will he have to play for a lesser club with potentially less money?

Sounds like the boss is liking Welbz.
He’s hard working, versatile and can be excellent on his day. I’d be happy if he stays on. A very decent squad member.

Big fan of Welbz. Hope he stays fit and I’m sure he’ll do well for us. Sign him up!

Depends if he wants to be the main man at a smaller club or not. He won’t ever be our starting striker but, man, you’d struggle to find a better rotation option in the league the way he’s playing

With Welbeck, Auba and Lacca we have three really good strikers and all with very different abilities. If the boss adjusts his teams according to the opposition then having Danny in the squad could be a really good idea. Is he the best striker ever? No but then he is hard-working honest and will give everything he has for the team every game. Plus he seems like a really nice lad. I would definitely keep him if we can get him to stay. Also he is English so that is a bonus in terms of Homegrown players.

Absolutely. We will need his height and power and he needs to play to that strength. All the strikers also need to come to the ball more rather than wait for it to get played to them. Many times you just see players waiting in the box rather than taking a more proactive role. One thing that Giroud understood and was very effective with was when he saw an overlap by a fullback or wide player, he would feint far post but then cut across to front post to meet the ball early rather than wait for the ball to… Read more »

On Current form. Welbeck/Iwobi should be in ahead of Ozil or Ramsey.

Hope one of them gets a start at the weekend.

Welbeck is an alternate for Laca up top IMO. Iwobi is a replacement for Auba and IMO may give better balance covering Monreal who is not without errors. Ramsey and Ozil vie for the same position just behind the striker. The issue is more that we are trying to accomodate both where we should be playing either or. Right side remains an issue (particularly if we play one of Ramsey or Ozil). We lack wide players and have to await our fullbacks join the fray to push forward. On the right, Mhki is the next best thing but not entirely… Read more »

He’s useful this season. More so than Elneny….or Jenkinson. Would keep him around till next summer. He adds a different dimension with his power and there are plenty of games in FA and League cup not to mention impact sub or circumstantial. I think we are beginning to also see a bit more fluency in our game within the team. Emery is beginning to see some return. Still not around the corner as we need to tighten defensively but going forward, there seems more relation again particularly as evident from the second goal. Sustainability is of course the issue (as… Read more »