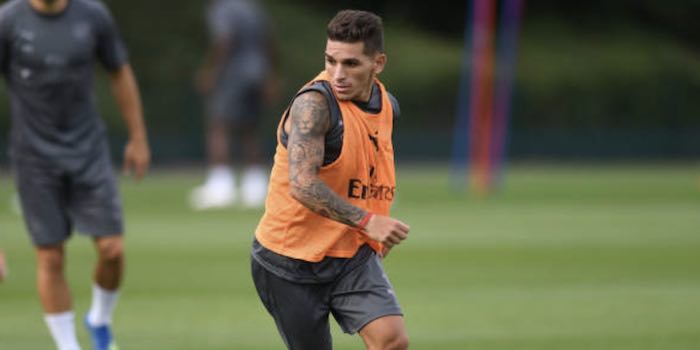 Fabian Coito, the interim coach of the Uruguayan national team, says he withdrew Lucas Torreira at half time of his side’s 4-1 win over Mexico as a precaution.

The Arsenal midfielder started the game in Houston, Texas but was later pictured on the bench with an ice pack strapped to his left calf muscle.

The doom-mongers immediately speculated the injury could be serious, but speaking to radio station Sport 890, Coito remarked: “I took Torreira off as a precaution, he told me his calf was feeling tight.”

Saturday’s game in the States was Uruguay’s only fixture of the Interlull, so Torreira should be back at Arsenal already. We should get an update on Thursday as to whether he’s fit enough to make the trip to Newcastle.

Let’s hope he can play at Newcastle safely. Very keen to see him playing but for lots of games through the season, so no point in doing him in early on.

I’ve been hoping to see:

But with Ainsley already injured i thought that dream was really scuppered when i saw reports of Torreira injured as well, hopes he’s o.k.
Can’t think of a more dynamic, energetic, combative, mobile, pacey and high pressing setup than this one, i think Ozil and Ramsey’s time has come and gone to be honest – sorry bud (just my personal opinion)

I worry about playing Ozil on the wing; he doesn’t keep the width, track back or score enough goals. He’s much better in the middle and if we went 4-3-3 I’d try Ozil at CM, alongside Ramsey with Torreira holding.

That’s a fair question. Though Germany did win the World Cup with Ozil playing wide. He may actually know what he’s doing there. IMO, its a question of gelling and team chemistry and time. Example: I’ve seen comments on the Guardian and other blogs where some trash the Hairy French Kid for lack of positional awareness – while others have observed that its actually Xhaka’s lack of positional discipline that expose the HFK so often. Maybe they’re all still figuring it out. Recall that Pep The Magnificent’s first City team(s) were fairly shyte. It takes time. So perhaps, just perhaps,… Read more »

Pundits? On this Site? Sacred blue

would rather have Ozil in than Xhaka.

I would rather have then both

I’m not a huge fan of Xhaka but I’ll like to see him play with Torreira for a few games to see how we look defensively. We saw it in the second half of the game west ham and we looked solid.

Such a relief if true. Love the speed with which he plays, hoping it might snap a few of our players out of the dawdling they’re so accustomed to. Also think Laca seems to thrive on high tempo play, so reckon Torreira will free him up a little; noticed he gets quite frustrated when players miss the quick pass.

Lacazette is a beast on his own.

Torriera is a gem.. We really need to partner torriera and guendouzi in the midfield and see what comes out of it

First Newcastle, I suppose. Let’s see how fit he gets.

This guy has to be starting soon if the injury isn’t bad. That cameo performance was brilliant against Cardiff. Now I know what all the hype was about. The tackles made just reminded me exactly what we have been missing since Gilberto left and why we have been crying out for a defensive midfielder for the last decade.

My only concern is that Petit, Vieira and Gilberto were big strong lads.

As we saw with Santi, even if they are great players the PL takes a toll on smaller players. Fingers crossed that our Terrier is like Kante and can avoid injuries.

Seems a stretch to blame Santi’s freak infection on his size. Sure he got injured but so have big guys too and apart from the achilles he was a pretty fit player

I’m not. He got injured initially in part due to his size with the physical demands of the PL, the infection came afterwards via surgery.

Pedant
Reply to  Why not

See above. ‘Fingers crossed that our Terrier is like Kante and can avoid injuries.’

Diaby was 6ft but that didn’t help his case…

If anyone jumped on a player’s leg and breaks it like that it doesn’t matter what size they are. So not comparable.

Well not many giants can take that kind of tackle he received as well.
I can somewhat relate to him now. I fractured my ankle back in 2009. The last 3 years have been a pain. Keep getting inflamed ankle/knee issues from muscle imbalance resulting from the initial fracture.

Haven’t been able to deliver a paper since ?

Tell me about it, I severely dislocated my ankle (I’m talking far cry style, foot was on the side of my ankle, snapped 4 ligaments off) in June 2016 and I still can’t run on it without discomfort and a day’s walking makes it ache when home again.

So yeah I have sympathy for any injured player.

Given his lack of starts, have a feeling he might start on the bench once again, as a precaution. He should be making starts soon enough, he’s good on the ball and reads space well. Saw him caught out a couple of times on the turn, but now he will have adapted to the speed of the PL. Can’t wait for him to be the mainstay of our midfield

He better be ready to shoot some gunns against Newcastle. COYG

Could offer an insight to why he’s not playing? Perhaps he’s not physically up to scratch yet to start for us. Perhaps the extra fitness training for emery’s pressing style is why. Who knows anyway….

just his and our luck he was ready to start games now doubtful, i like the fact the coach took him off to reduce the risk factor

START HIM! He has to be an upgrade on Xhaka

Phew – big relief if true; I had feared this might have kept him out for “3 weeks”

Which would mean he’d never get to play football again

Can you smell the change ?
Torriera protected by his National coach,
And apparently Auba has been allowed to leave his national squad to come back for training.
.
Mr Emery must have a good phone manner.

Hopefully he’s our only slight worry. Would be a welcome change if Emerys time with us isn’t bogged down with the injury curse.