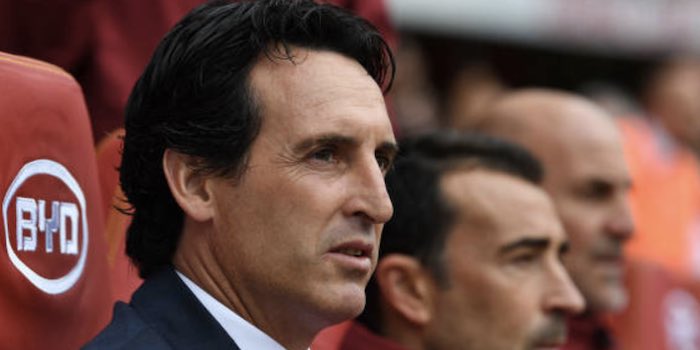 Unai Emery says that in his experience English clubs didn’t always take the Europa League seriously until UEFA changed the rules to hand the winners a place in the following season’s Champions League.

The Arsenal boss won the competition in three successive seasons with Sevilla, so knows what it takes to go the distance, and he insists he’s going to tell his players they have to treat it seriously.

Speaking at a conference in La Ciudad del Futbol in Madrid, Emery said, “In England the culture is that the Premier League is the first competition, and the second one is the Champions League.

“They compete and want to win it but they have met Real Madrid, Barcelona and Atletico, who have all imposed themselves. They are the dominant teams in the last few years.

“It’s a competition where the English didn’t see that they could develop and find a place, it was a sacrifice too big.

“When I won it with Sevilla I saw that the English clubs didn’t fight for it, but then UEFA put four years ago a rule to strengthen it, giving the Champions League to the winner and for four years three English teams reached the final.

“I am in this competition and I’m telling my Arsenal players it is very important because it is a title and an open door to the next Champions League.”

Chelsea were Europa League winners in 2012-13, while Manchester United won it in 2016-17 and found themselves in the Champions League despite finishing 6th in the league that season.

The Gunners are currently in the top four, but it’s early days still so no route back to Europe’s top table should be dismissed. It doesn’t sound like Emery will let that happen anyway, and hopefully we can go one better than last season’s semi-final exit.

The Unai Emery revolution: how the Spaniard has changed Arsenal

Not too much of an ask surely.

Would still win more than Spurts.

Would be nice, probably unrealistic but no reason why we can’t go for everything

If we win two trophies that would be more than Sp*rs in the last two decades!

Sometimes I don’t understand the fuss about playing in the champions league. All English clubs (except for City maybe) know that they are no match for Barca, Real, Bayern or even Atletico. They know they are not good enough to win the trophy. Then why such a huge fuss?? Just give your best in the PL and whichever competition you are in. Winning the domestic league should be the biggest priority and the rest will automatically fall into place. Look at Real Madrid, inspite of winning an outrageous 3 CL in a row, Barca still command more respect. So let’s… Read more »

Because with CL comes more money that can be invested into the squad. Also, most good players want to play in the CL as it allows them to compete with the best in the world. So, it is also an a way to attract talent.

Players want to play in the Champions League so being in it is the best way to winning the domestic league.

And you never know what could happen, just look at some of the teams that have won it.

You think Barca commands more respect then Real winning 3 champions leagues in a row… cough. How so?? Winning the champions league is the pinnacle of club football. When Chelsea won in 2012 no one gave a shit that Man U won the title that year but all the talk was about the accomplishment they had finally achieved. You can’t tell me if Arsenal won it back In 06 it wouldn’t mean more then even the invincible season in 04. I’d trade that for a UCL trophy anyday.

Champions league over the INVINCIBLES.

I think there is merit to it, but chelsea had already won the league a few times.

I still think the league is the prime goal for most english teams, unless they’ve had a lot of league success in recent years.

So for now man city might be the only team that values the epl lower than the cl.

Personally I value the epl as a better judge of a season but thats more the competition format, both competitions are awesome to win

PoopyMccheese, I agree with your first sentence but totally barfed at your last sentence. Can I still like your name?

We should have won it last season with a bit more effort. Definitely can win it this season if we keep improving, ideally beating Sp*rs in the final as they get will kicked out of the CL at the group stage.

Well, finishing fourth in a group in the CL knocks them out of Europe. So, no it won’t happen sorry!

Haven’t heard one piece of bullshit come out of this mans mouth so far…..Now that I can respect!

Currently we’re one of the strongest sides in the competition. It really depends on which teams come in from the champions league (good chance of spurs and united)

…and those two teams coming in would change our standing how?

wouldn’t mind a st. totteringham’s day treble…oh no..quadruple when we kick them out in the el, two cups and finish above them in the league.
but right, the route man united took 2 seasons ago was arguably not as tough as atletico’s last.

I love the Emery action plan. I also loved Wenger and will always do. I love arsenal the most.

Did Emery give this interview in Spanish? I’m guessing so since the word ”process” is not used 😛

Glad to see Emery is taking the EL seriously this year as we have a good chance to get to the final (and then anything can happen). There are and will be (after CL group stages are done) some tough teams in it, but none that we cannot beat on our day. We have a solid chance at the top 4 as well as it seems Emery knows how to get maximum points against teams below us (which was our downfall the last two years of not making the top 4), but will still be tough as there are the… Read more »

I’d love the top 4 but would HAPPILY exchange it for a Top 6 BUT to win the EL.

Our first proper European Trophy in years is nothing to be sniffed at. It’s the second major European Cup Competition. Plus gets us into the CL too.