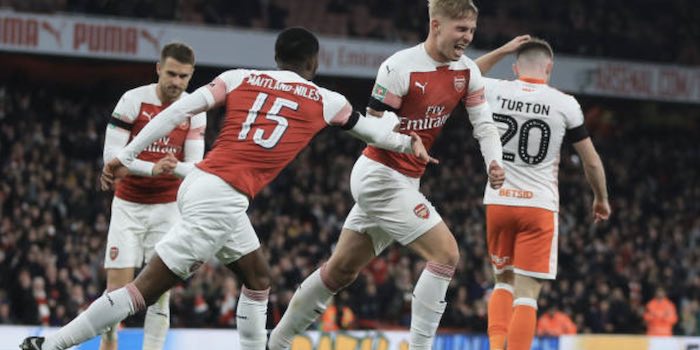 Arsenal made it through the quarter-finals of the Carabao Cup as goals from Stephan Lichtsteiner and Emile Smith Rowe gave them a 2-1 win against Blackpool at the Emirates this evening as both teams finished the game with ten men.

With Liverpool in the Premier League on the horizon and something of a defensive injury crisis to contend with, Unai Emery picked a heavily rotated squad, handing a full debut to young Spanish centre-half Julio Pleguezuelo and a first start for Carl Jenkinson in two years.

The game began in relatively cautious fashion, with Arsenal enjoying the lion’s share of possession, and it was the 18th minute before the Gunners fashioned a half-chance but Mkhitaryan pulled a shot wide. Mustafi headed over the bar in the 28th minute, in truth it was dull fare with little to shout about, but out of nowhere in the 33rd minute we went ahead through Stephan Lichtsteiner.

Guendouzi picked up the ball outside the box, looked up, played what appeared to be a strange cross but there was the Swiss international to poke it home and make it 1-0.

The young Frenchman had a shot which deflected wide but the referee gave a goal kick, and Ramsey got on the end of a Maitland-Niles cross but could find the accuracy at the back post to trouble the keeper, meaning Emery’s side took the one goal lead into the break.

There were no changes from either manager at half-time, and just five minutes in Arsenal scored again. Welbeck burst down the left, he fed Jenkinson whose cross was slapped into the path of Smith Rowe and his shot into the ground bounced up and into the roof of the net to double the lead. 2-0.

The visitors almost got one back straight way when Paudie O’Connor’s header from a corner rattled the corner of post and bar with Cech nowhere, while at the other end Mustafi almost made it three from an Arsenal corner but his powerful header fizzed wide of Howard’s post.

There was more drama in the 56th minute when Guendouzi, who had picked up a yellow card in the first half, was shown a second by the referee for a foul on some Blackpool bloke. It was certainly a foul, whether it was worthy of a second yellow card is another question, but either way the young Frenchman went off for an early bath.

Emery made a change, bringing on Lucas Torreira for Maitland-Niles on 60′, but Blackpool got one back through an O’Connor header from a corner. We had been warned, and this time the young Irishman hit the target to make it 2-1.

Arsenal looked a little shaky, summed up in the 69th minute when Cech turned inside a man in his own box as he was looking for a pass, lost the ball and it came to a Blackpool player but he was clearly offside and we got away with it.

That prompted another change with Alex Iwobi replacing goalscorer Smith Rowe, and shortly afterwards Pierre-Emerick Aubameyang came on for Welbeck. The Gabon striker was hacked down in the 84th minute by O’Connor who was immediately shown a red card by the referee, making it 10 against 10 for the final few minutes.

The referee decided there ought to be 6 minutes of added time at the end of the game, during which Arsenal played a lot of keep-ball to run down the clock and come away with the win.

Job done, through to QF. 3 wins to go!
Can someone please tell me is Guendouzi gonna missed this weekend match? Cheers.

Join the discussion…Yes he will miss the Liverpool match

That should be the headline

The_Kolkata_Gooner
Reply to  Ya gooner

I AM ARSENAL
Reply to  Ya gooner

If Emery can get something out of him could be useful. Kept things simple ans overlapped at will.

eternalflamini
Reply to  Ya gooner

Yeah seriously! Him, Lichsteiner and ESR were the big positives for the evening for me.

TechBatty
Reply to  Ya gooner

Yeah, on that performance he could be back-up on the right. He can’t cross with his left foot though. The “assist” for ESR was from the GK.

Heh I had to do a double take on the unbeaten run part! My brain seemed to have considered the weekend draw a loss.

11/10 Guenduzi getting a useful lesson without us losing anything

Game won,into next round now to concentrate on Liverpool

I feel like we managed the game well after the red card. The experience of Lichsteiner was very evident toward the end when he kept slowing play down and taking it toward the corner when iwobi wanted to overlap and get into the box he wasn’t having it.. He just slowed it down that’s what experience gets you. Good win keep it coming boys!

Guendouzi suspension is a bit of a concern for the Liverpool game – hope at least one of our three injured full backs recovers!

I’m sure he ain’t suspended! It’s 2 yellow cards not a straight red!

He can play if needed. Ban only for this cup

Sorry I was wrong. He misses Saturday

Maybe better Unai has no temptation to start a 19-year-old boy against Jurgen’s men. This will require full concentration. I hope Mistafi’s start today means Sokratis-Holding on Saturday

To be honest, I was more excited about seeing Jenko playing today than anything else!

And he almost scored too!

I think Unai is gonna drive him nuts and when he finally plays he is gonna bang 10 goals per match to relax ?

I’m in the same boat. I know we won and all. I see Nelson and ESR and wonder ‘Eddie’.
Hope we don’t make him a Chuba Akpom.

There still looks like a real player in Jenko. A young Lichtsteiner if you will.

Ugh we’ve been drawn again some skanky team in the next round!!!

Off topic, but cracking story about Andy Linighan by Andy Townsend on BBC Radio 5 Live just now. Norwich away game at Hillsborough. Norwich 1-0 up. Last minute. Ball falls to Linighan in his own 6-yard box and he swipes it into the roof of the net for an own goal and Sheffield Wednesday equaliser. Players walking back to positions for restart. Linighan turns to Townsend and just says, dry as you like, “I don’t miss from there.” Made me laugh out loud.

Wonder why we didn’t play Mkhitaryan today!? Smith Rowe is a star in the making and Ainsley Maitland-Niles is a future Arsenal captain!!

We played his doppelganger , with the same name ?

Looks like we got the Tots. Let’s kick some arse.

Why can’t we keep a fucking clean sheet? We made it hard for ourselves by conceding another shit goal. Oh, and thanks Redknapp for the shit draw: we didn’t need to play Spurs!

Anything else to complain about?

I agree FG, would of preferred a big side in the QF to get the Emirates pumping and the team up for it. Oh well. Least we can play the youngsters against the tiny tots and keep our powder dry for more serious tests.

At least the game is at the Emirates. And are they having tractor pulls at Wembley next?

Atkinson was the VAR…no wonder we had so many poor calls today. That said, we made heavy weather of the game. We were in control until the red and then it got a bit tricky. Good that the Ref evened it out towards the end but for a while, it was looking like we were going to let them back in again. Anyway, this is the least priority to say the least. What’s important is the weekend and Liverpool. Good to see AMN back in. He can cover at Lback and perhaps we should have tasked him there today instead… Read more »

Good thing we used Jenkinson because we need Maitland Niles in midfield against Liverpool or as left back.

I know this might not go down well here, but I think giving a straight red for the foul on aubameyang was a bit too much. If it was against us, we would be shouting. I guess the ref was just trying to balance the game. Anyway, bring on the sp*rs