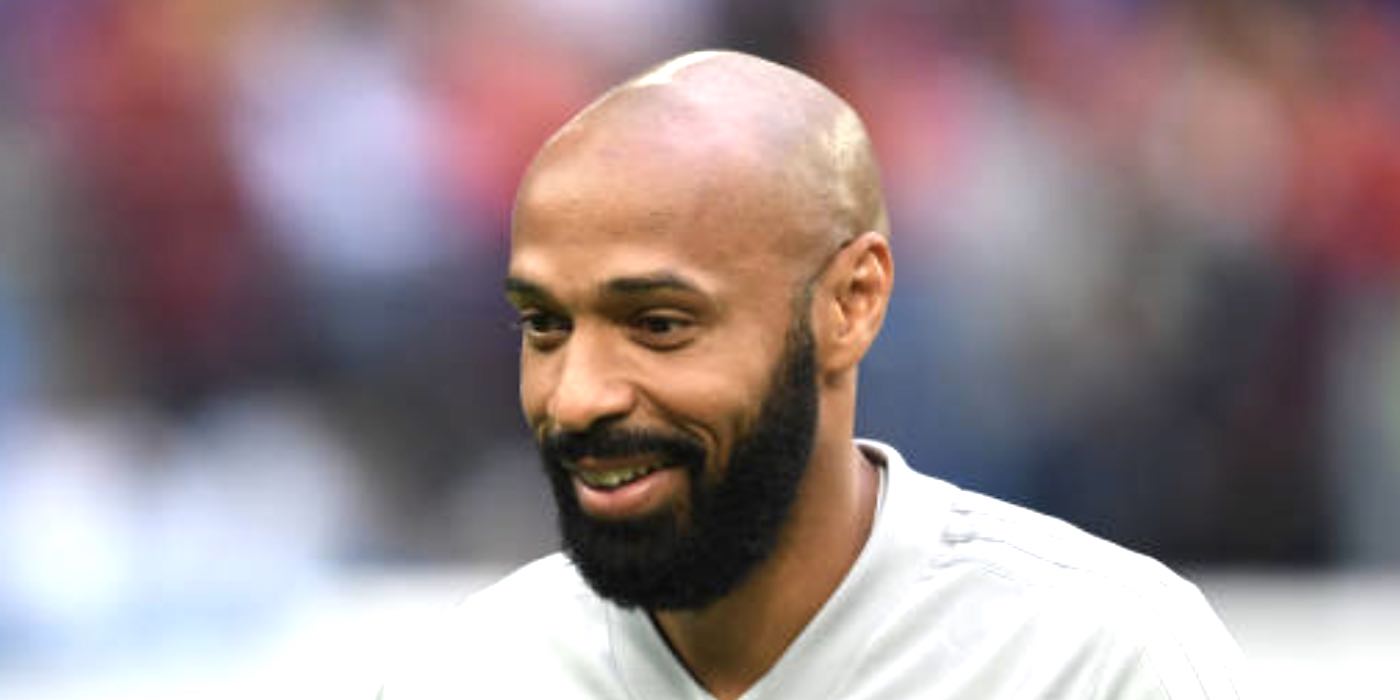 Arsenal’s all-time leading goalscorer, Thierry Henry, has been named as the new head coach of Monaco.

The 41 year old returns to his former club having signed a three year deal, and follows in the footsteps of his great manager and mentor Arsene Wenger who was the man who gave him his debut as 17 year old in the principality.

Henry had been assistant to Roberto Martinez in the Belgian set-up, and had spent time as a youth level coach at Arsenal. He was offered a full-time position by Wenger, but when asked to choose between that job and his punditry work with Sky Sports he chose the latter.

In a statement via their official website, he said of his new position, “In the first place, I thank AS Monaco for giving me the opportunity to coach the team of this club which is so special to me.

“I am very happy to come back to AS Monaco and extremely determined to meet the challenges ahead. I can not wait to meet the players to start working together.”

Henry is joined at Monaco by former Arsenal player and U18s head coach Kwame Ampadu, and faces a difficult task to rejuvenate a team that has won just one of its nine Ligue 1 games this season, a run which saw Leonardo Jardim sacked last week.

In mitigation, their transfer policy has seen a host of top class talents, including Kylian Mbappe and Thomas Lemar, leave the club it was always going to be a struggle, but one would assume Henry has had some assurances over his ability to invest in the squad.

Arsenal fans will look on in interest at how he fares. Henry has a close relationship with Josh Kroenke, and his long association with us has seen him mooted as a possible manager in the future.

Saliba: I owned an Arsenal shirt with Henry’s name on it

A huge opportunity and one he cannot afford to waste is he has serious aspirations to become Arsenal manager one day. Best of luck to him! Will be looking forward to watching him and Viera on opposite sidelines come December 8th!

Oops, *opposite sides 😉 Although having the benches on opposite sidelines of the pitch don’t sound bad.

Really hope he does well and at least manages to climb up to Europa league spots, so that’ll give him some European cup experience too. That Ampadu joins him there came as a big surprise.
Who knows in 3-4 years… For now I’m just looking forward to the Unai era tbh.

Yeah the Ampadu news is a bit of a shocker. Is there any position left at Arsenal that hasn.t been turned over in the last year or 2? Hope he doesn.t try to nab any of our top young talents

I would love for him to take some of our young talent – but on loan. Nketieh for example isn’t getting any senior minutes atm and a loan move to Monaco in January could be hugely beneficial for him.

The French league is a top league that’s a bit less physical, would work under a legendary former striker that knows what it takes to succeed in the prem and especially at Arsenal.

So happy for the king and would love nothing more than to see him (and Vieira) succeed in Ligue uuhhh.

And so it Begins

Shut up you slag, get out of my pub!

Would be surprised if he does better than Jardim who has had to cope with some major players leaving. I hope he does, but he has a long, long way to go. Surprised Wenger hasn’t been hired yet.

Pretty gutted for Jardim, he was one of the favourites for the Arsenal job and within a month and a half his stock has completely collapsed. One of the top young managers in Europe in my opinion, deserves better.

Out of the names floating around before Unai was hired, Jardim was my preferred candidate for the job.

Me too. I was impressed with what he did against the mighty PSG and Lyon with so little stability.

Yeah mine too, him and Allegri.
Hope he bounces back because the football he stands for is good football!

Adding my voice to the litlte Jardim appreciation committee here. His player development imprint is all over Europe’s top clubs, with young players he worked with performing at Inter, Atletico, City, and PSG. And smaller clubs like Utd too.

I would rather hire the entire Monaco scout team and the youth coaches…the players they have bought, develooed and sold recently, is amazing. If Arsenal had those players and didn’t really need to sell any of them….we would b dominating Europe!…

About 6 years ago when the Russian billionaire bought Monaco from the second division, he invested tons of money into the club and the plan was always to challenge PSG for the title. They had big players on massive salaries (Falcao, James, Moutinho, etc). The fact that he’s been selling ALL the top talent that could be sold for good money tells me he’s looking to get his investment back, whether it be because he’s about to sell the club or financially under pressure. I hope I’m wrong and I hope Henry will have the opportunity to invest and build… Read more »

Apparently Wenger might become the new sporting director at PSG. But of course his job title would be anything but Director of Football! What is a director of football anyways? Someone who directs players where to go? ?

Tough to make the change from player to coach, let’s hope is more Guardiola than Pardew.

Would love him to be successful and come back as Arsenal manager, but maybe too much to hope for.

Guardiola and Zidane started with the biggest clubs, the strongest squads in the world. Henry will not be able to achieve what they did, with Monaco but Henry knows a lot of football. He will get a lot of tactics right.

Even pardew’s nob isn’t as much of a nob.

I’m not so sure about that.

I refer you to this
https://www.youtube.com/watch?v=3nJ9Ha–pAg

Given most coaches were players before they were coaches it isn’t as hard as someone who hasn’t been a player becoming a coach. The only one I can think of off the top of my head is Villas Boas. I think it’s just diifficult to become a good coach because you need to have the ability to convince the players to buy into your ideas. What Henry has to his advantage is that he is one of the great players of his time and players will want to listen to him, at least to begin with. I would expect an… Read more »

Er, Maureen started out as a translator IIRC.
Some would say he still is, as he translates football into crap.

Whos taking over from Ampadu

Anyway why isn’t his son Ethan Ampadu at Arsenal? He came from my home-town club Exeter City to go to.. Chelsea. Who have decades of history denying young players first team minutes, a really strange one.

Frimpong.
The kids are in for a DENCH!

(Or maybe they are not).

He wants to hope his team talks are more interesting than his punditry on Sky.

He was a good pundit but not a great talker like Neville. In the end, Arsenal did everything he said and got criticized by fans for. We let Giroud go and brought Laca and Auba in.

All the best Henry!
So relieved he’s not gonna be on the side as Terry.

Random observation… Does anyone else think that Unai Emery looks like the love child of Andy Garcia (the actor) and Santi Cazorla?

He can also play the Count Dracula quite well, I think.

That’s a high level nomination for a relatively inexperienced coach. Let’s see how it pans out but based on what I have seen of him as a pundit so far I wouldn’t want him back at Arsenal.

Come on, Deschamps started at Monaco. Even no name Willy Sagnol started at Bordeaux.

He might rise to the occasion. Time will tell.

I wonder how I can apply for Ampadu’s now vacant spot.

I think Ampadu should be the news here

I haven’t give a sh*t about TH since he left Arsenal for Barcelona.

Also the shite he’s talked since becoming a pundit.

He wasn’t a good pundit.

Tried to over compensate.

Ian Wright is another, speaks with passion no doubt but hardly the most lucid.

Go learn the job and come back here to work the work. COYG

Football is always a game of 2 halves. Fuck the punditry there is nothing amazing what G Neville spouts our with hindsight and loads of camera replays it’s all basic elementary. Thierry should not be ridiculed for a bit of va va voom and not being able to scribble a few lines and crosses on the monitor. He is legend. I think he should be judged on a successful World Cup with Belgium and this is a promotion for him in his managerial career and can only wish him the best. As I stated he is legend.

Legend does not automatically make you a good manager.

I don’t think Henry will make a good manager.

At least he had the stint with Martinez with Belgium.

Coaching a team requires man management skills, this is where it becomes tricky.

You can have theories about how to play the game but you have to be able to get the players to execute it. You are now dealing with a variable quantity. These are people not a computer game.

Hope he is successful.

Don’t do a Gary Neville.

Not sure what Monaco expected from Jardim. The squad was depleted of some of their best performers.

Difficult to see how they would have kept the consistency necessary to challenge with the need to start from scratch and rebuild.