Arsenal punched their ticket to the knockout round of the Europa League which is good. Failing to get a win and guaranteeing finishing top is not quite as good, but all that leaves is that Arsenal need one more win from the final two matches to complete finishing in the top spot.

The horrific injury to Danny Welbeck, is very sad and makes almost everything else about this match feel very unimportant. It appears to be a very serious injury but not much in the way of updates yet. I hope that it will not effect Danny’s career going forward and that he can make a full recovery.

Arsenal 0-0 Sporting: By the graphs 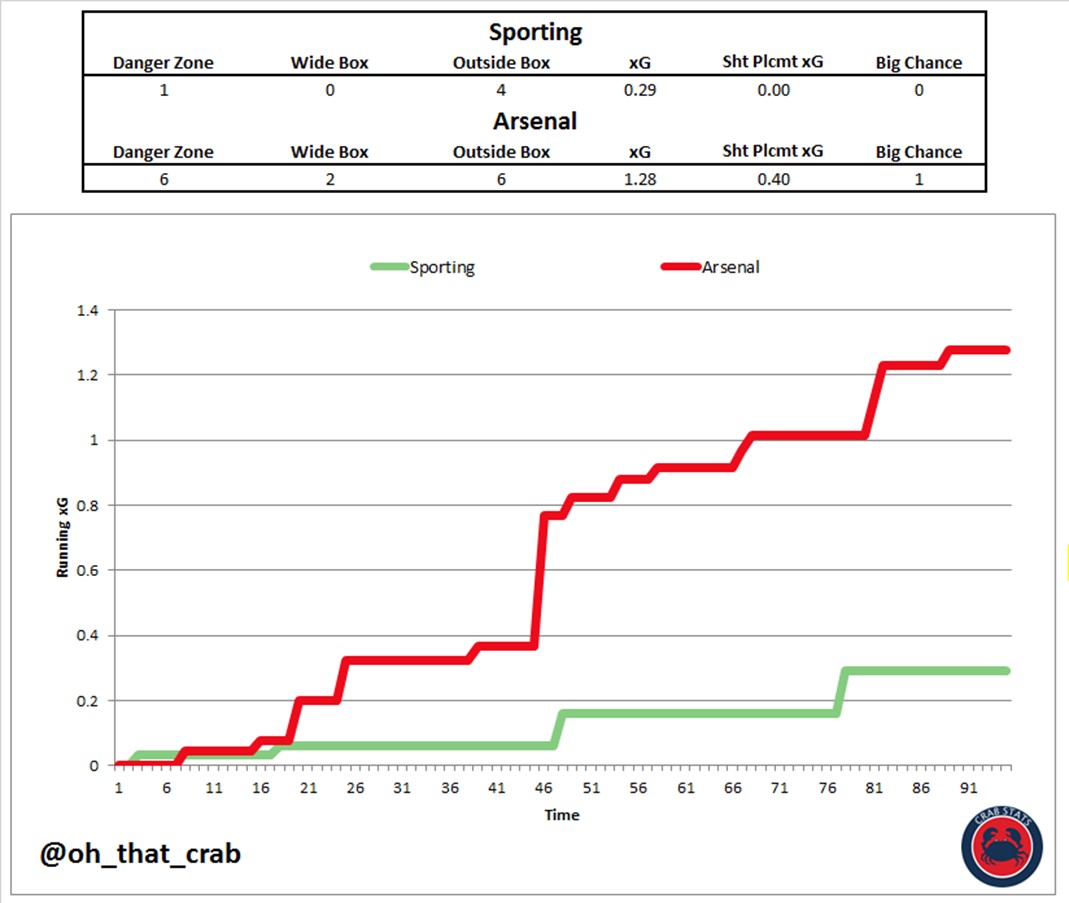 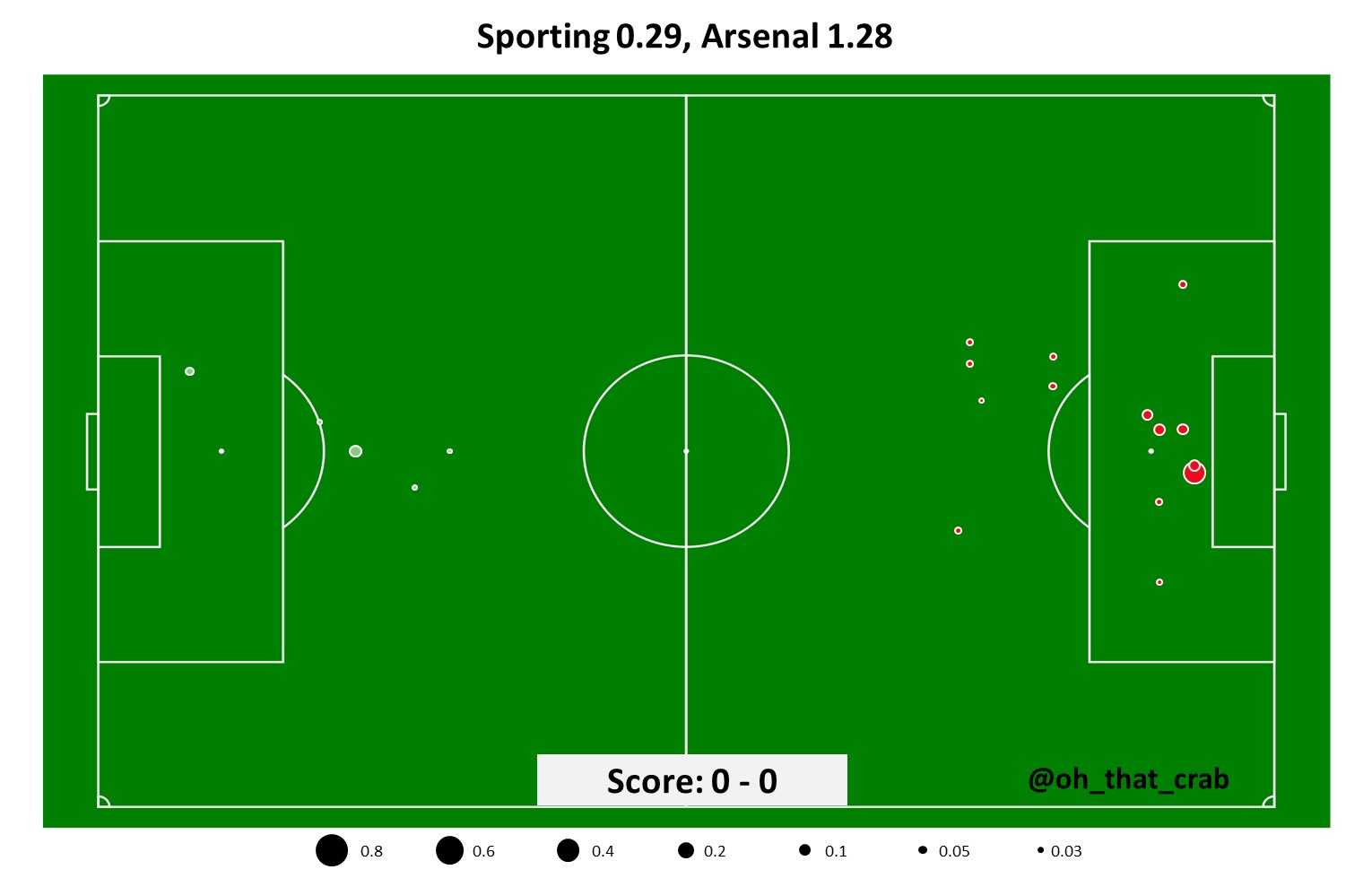 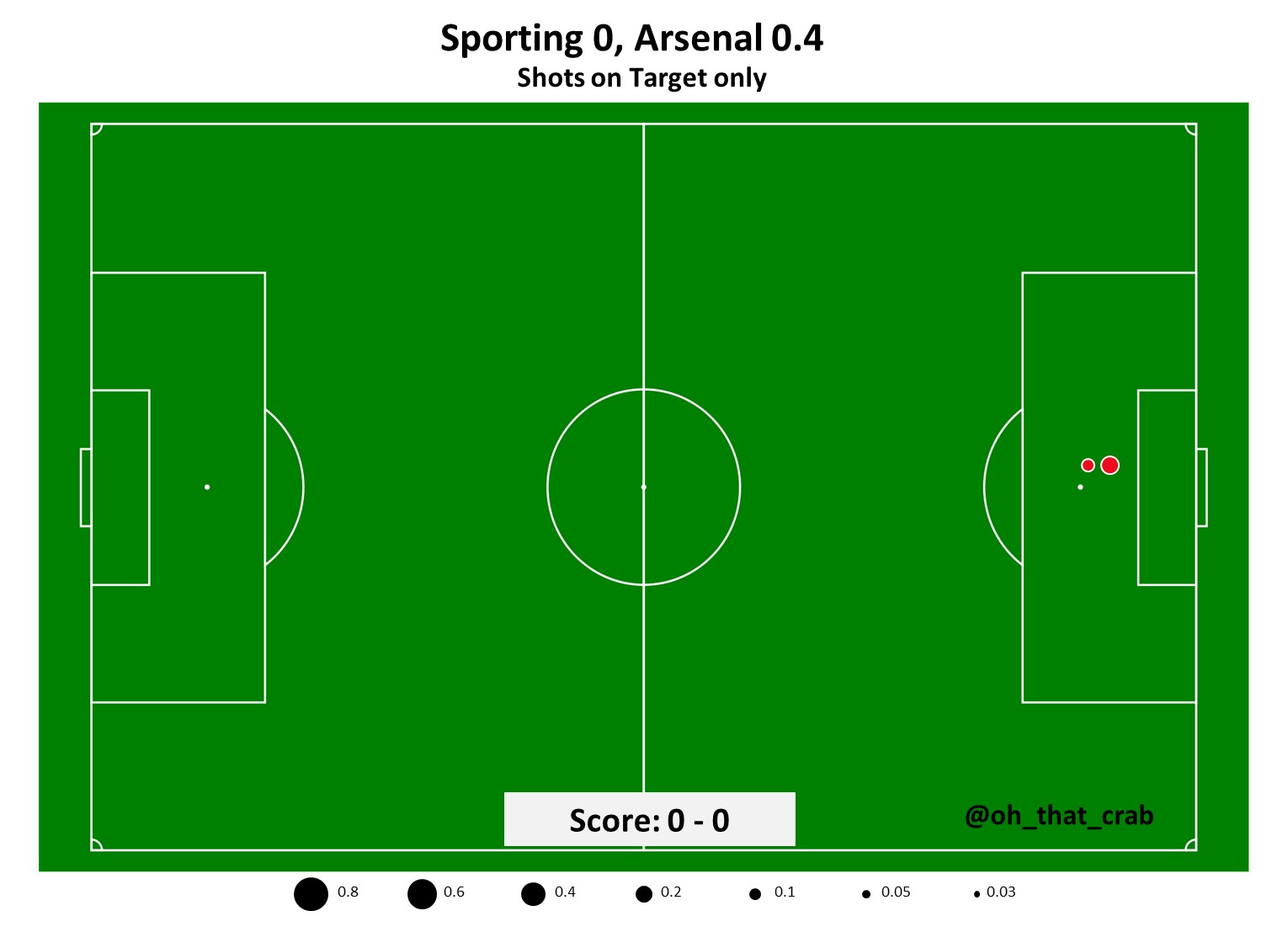 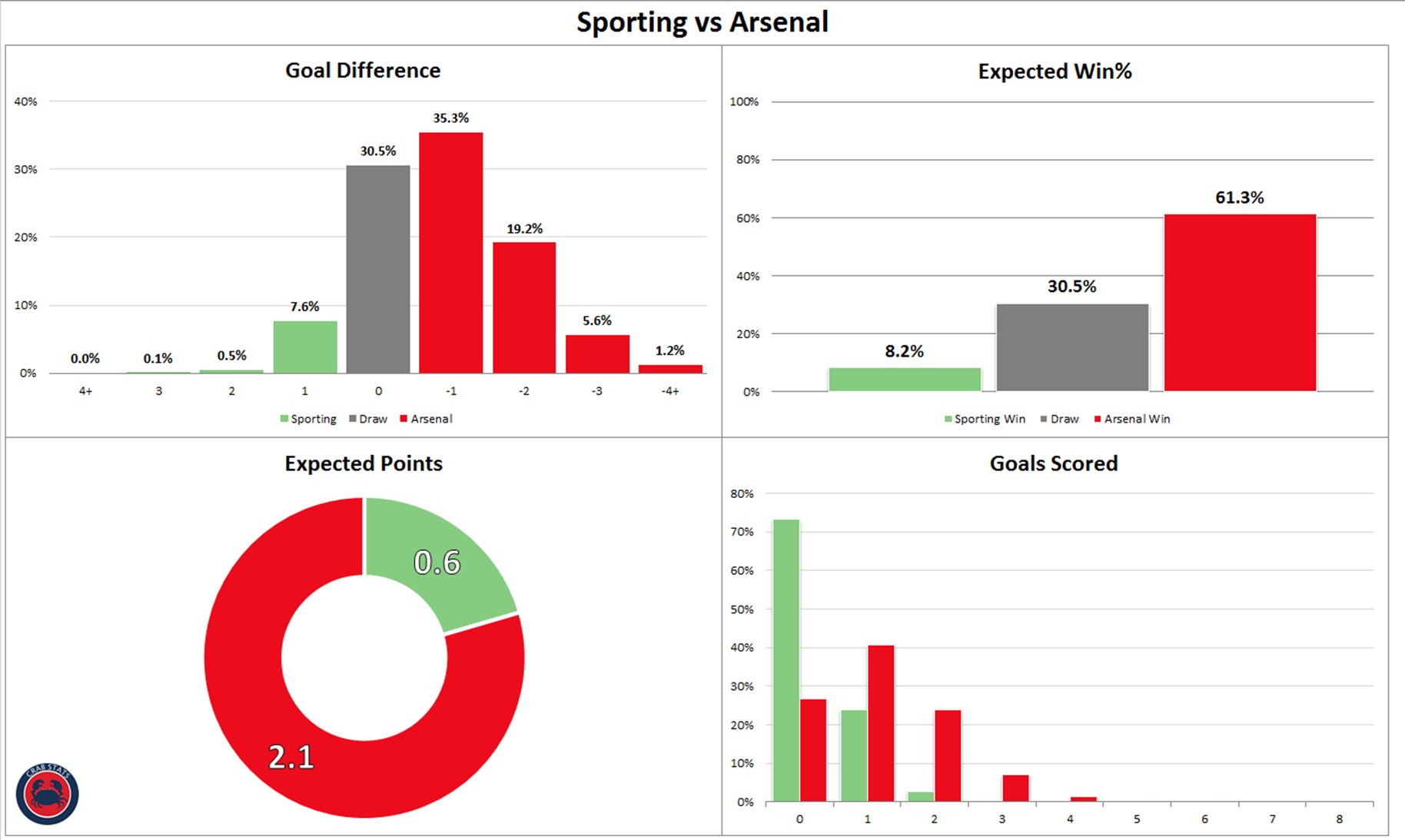 19 – Total shots in this match

This wasn’t the most exciting match of the season. It really seemed to be played at a speed well below what we saw against Liverpool on Saturday. In this match Sporting were content to sit very deep, defend and hope to survive the match with a draw. Sporting were successful but it made for one of the more boring matches Arsenal have played this season.

3 – Passes completed in the box, tied for most

3 – Interceptions, tied for most on Arsenal

2 – Tackles, tied for most on Arsenal

Mkhitaryan has been a frustrating player this season. He alternates between really good and incomprehensibly bad for a top level player, often within the span of a few minutes of match time. In this match, he was able to cut out a lot of the bad play and was probably Arsenal’s best player on the night.

2 – Successful dribbles and was fouled once as well

22 – Total passes attempted, 2nd fewest behind only Petr Cech on Arsenal for players who played more than 35 minutes.

Emile Smith-Rowe showed flashes of what has made him an interesting prospect in this match but also that he has a way to go before he earns a first team place. The attacking midfield trio in this match was refreshingly direct in the way that they attacked Sporting but against the deep block it was unable to turn into good chances

Smith-Rowe led Arsenal in completed dribbles but also led Arsenal in the times that he gave the ball away with the ball at his feet. He passed the ball at a high rate, but found himself with trouble getting on the ball in a match that Arsenal had 70% of the ball.

With Arsenal assured that they will be moving into the knockout round, using the final two Europa League matches to get more minutes for Smith-Rowe will be very important in his development.

Sources: Opta via Whoscored, Staszone and my own database

these stats go very much against the current narrative that Mkhi is shite. granted, less goals and assists than initially, but it’s not only these stats that count. wonder why do we always have to have a scapegoat? 15 games unbeaten for fucks sake.

The current narrative as you put it is coming from the same stable that rubbishes our most creative player Ozil. If you see the prodigious amount of work that Mkhitaryan gets through and what he contributes its hard to believe the flak he gets. His finishing is off at the moment but as you say it seems there is always a scapegoat as unfair as it is

I disagree. No need to assume if someone is critical of Mkhi they’re not proper fans. There’s a phrase “lies, damned lies, and statistics” and it basically applies here. Mkhi has flashes of good but mixes it with the failure to make the difference. Often loses the ball in odd situations. Has the technical quality but flits in and out of games. For someone with his quality and salary its not wrong to expect more. Honestly I see what Utd fans saw in him – he’s got something there, it just isn’t worth 160k+ per week and isn’t worth a… Read more »

i’d say the onus is recently rather on these failures, whilst it tends to be forgotten how good his work rate is. we need our Romford Pelés as much as we need our creative outlets, this has been missing these last few years with le Prof.

I agree, it seems we always have to identify someone who has had a bad game no matter what happens.

Personally I felt Mikhi was our best player, worked his balls off as usual and was involved in everything. Then I read the rating and the comments on here and wondered what I’d missed. Sure he gave the ball away sometimes, but that happens in the final third when you’re trying to make things happen. It was just a day when things didn’t click.

Mkhi is a number 10, and needs to be involved in the game more. He also seems to prefer playing behind Auba who runs behind the defenders than with Laca who doesnt as much. As he doesnt have the pace and/or power to get in behind on the return ball.

You wont often see him make third man runs into the box because he has defensive responsibilities out wide.

Basically Emery and Wenger have been shoehorning players out of position. Mostly due to someone up above needing that glamorous striker signing instead of a solid experienced central defender.

Starts has a way of disagreeing with wat u think…..

I don’t think they disagree, they just give an objective valuation of a player’s performance. What it should not do is take away from what your eyes see, because there are things that can’t be measured. Like Torreira’s movement to cover a position, which in turn discourages the opposition and forces them to pass the ball backwards.

Stats do work against narratives that are pushed by agendas rather than an actual analysis of the game or a player. I always check the stats of a game after each one, so that I can form an educated opinion of it.

Sorry but stats only tell half the story, I remember some excellent stats attributed to Denilson. Miki is a frustrating player that I think many feel should be better than he has been. He works hard, which is great but I’m sure many would agree that his end product should be more than it is. Perhaps that’s confidence but Emery has kept him benched for much of the season for a reason Don’t get me wrong I like him and on his game he should be a key man but for some reason he’s not been consistent. It’s a long… Read more »

we’ve got so many people who can deliver end product, but every great team needs their Romford Pelés, this is one of the things we’ve been missing so much these last couple of years with the Prof.

Glad you said it Goonersam.. Statistics are not the Holy grail.

I hope Coach doesn’t play full strength teams for the next two EL matches. Our December is looking brutal. We need all the big guns for Maureen’s Gang and Toilet Seats match #1, then Pool on 12/29…. For Toilet Seats #2 (Carabao Cup), V and Q, get Smith Rowe and Nketiah minutes, at least, and keep a semblance of yesterday’s lineup, or perhaps even more junior.