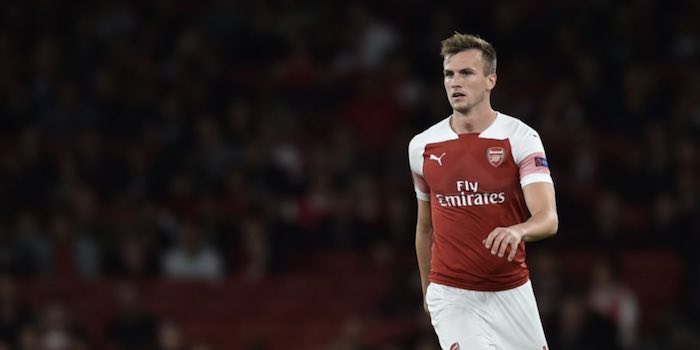 Rob Holding says Arsenal still have momentum on their side despite three draws in their last four games.

Having been on an 11-game winning streak, the Gunners have had to settle for single points against Crystal Palace and Liverpool in the league and versus Sporting Lisbon in Europe. A hard-fought win over Blackpool in the Carabao Cup has been their only win over a jam-packed two-week schedule, although the unbeaten run now stretches to 15 matches.

Unai Emery’s men face Wolves on Sunday at the Emirates and Holding is eager to pick up three points that would put the pressure back on their top four rivals before the Interlull.

“The past three weeks have been a game, two days break, a game, two days, so it is just about getting a recovery session done, getting yourself feeling up to scratch to go again on Sunday,” he told Arsenal.com.

“There’s definitely momentum about the team, we’ve rested some players who will probably come in at the weekend and we’ll go again and hopefully get the win.

“I want to play every minute that I can. I am feeling fit and healthy. I just want to get as much game-time as I can.”

The 23-year-old has played every minute in the Premier League since coming on as a sub against Everton on 23 September, a run of seven games. He’s actually been in the centre of defence for every one of Arsenal’s clean sheets this season; a total of five across the Premier League and Europa League.

His impressive form hasn’t yet led to a first call-up from Gareth Southgate, but it’s something the defender is aiming for, especially having seen his roommate at under-21 level, Leicester’s Ben Chilwell, make the step up.

“You see Ben getting in and he’s a guy I first roomed with in the England under-21s so I am really happy with how he’s doing,” he told the Evening Standard.

“We’ve seen with Harry Maguire, getting his chance over the past year how well he has done. So, there will be chances there. I was disappointed to miss out but I’m just concentrating on getting a run on the team.”

Love this guy. After a shaky last season he seems to be back in form and is developing nicely indeed.

Also, is anyone following Chambers closely this season? How’s he doing? What do Fulham staff and fans think of him so far?

hard to tell, he is being used as a defensive utility man.
played in 3 different positions at the back so far in the worst defence in the premier league, that hasnt played a set back ‘x’ in the games so far.
i dont think their manager knows his best defence (as they all seem shite) which doesnt really let us judge very well.
Watched a couple of his performances and it doesnt look promising.

Jenks has looked a better LB than Chambers has at RB.

I’m surprised he hasn’t had a call up to a squad yet, it can only be a matter of time

Did Carl Jenkinson’s dad sing the backing vocals on that too?

No, but there’s strong rumours he played backup flute on bitter blue

Surprising he wasn’t called up to the latest England squad. He’s in excellent form, playing out from the back brilliantly (something Southgate wants in his centre backs) and also playing regularly. He definitely deserves a call up.

Great to see our young players finally having a non-toxic environment to play, learn, and improve in

No hype surrounding him, he just gets on with his job, a bit like Mertesaker in that he does some vital work but rarely catches the eye, Emery trusts him though and that’s good enough for me.

He’s probably benefited from having a slight off season last year after his Chelsea heroics, now the hype is calmer

England seem to have quite a few decent young players coming through, good to some gunners amongst them.

*to see. If you’re an English Gooner that is. Arsenal to win the champions league and England to win a major in the next 4 years, you saw it here first.

Meanwhile…Nelson strikes again. Subbed in with 8 mins to go, 1 minute or so after he grabs the late winner. This boy I’m telling ya!!

And on Holding, he prob be the bargain of the new millennium in a few years time. I see a top defender in there. So composed, assured, strong, agile and humble and eager to improve. I like!

The shirts his in my opinion!!

Love his composure. He makes mistakes too but he has improved positionally and he doesn’t panic.

Part of it is his control on the ball which is pretty good.

Hope we stay solid and beat the Wolves. We need to put points on the board again and stay with the leaders.

Had a uni housemate who was a Bolton fan back when they were in the Prem(cahill era)
so have always had my eye on them, when we bought holding from them they had just had a tough season and finished bottom of the championship however, 19 year old Rob Holding played 30 games and was voted their player of the season.
to do that you must have something about you and i have been championing him ever since.
how he is still being omitted from Southgate’s squads is beyond me.