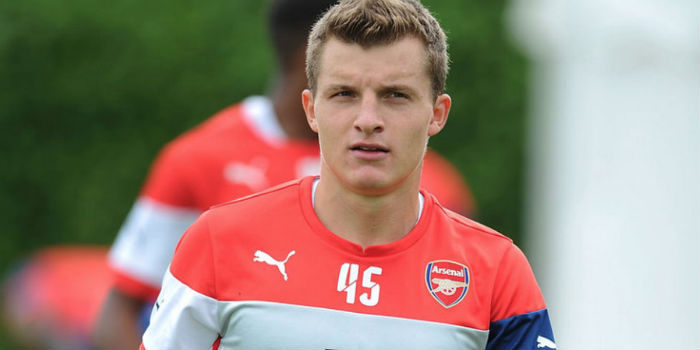 When Thomas Eisfeld signed for Arsenal in January 2012, the club seemed caught in two minds whether to make a song and dance about his arrival from Borussia Dortmund or not.

On the one hand, we’d signed a promising youngster (on DEADLINE DAY!!!!) and on the other, he was simply a youngster with promise.

In the end, things didn’t work out for the German midfielder at the Emirates and after just four first-team performances, all in the League Cup, he moved across London to join forces with compatriot Felix Magath at Fulham.

When Magath was sacked just a couple of months after his arrival, Eisfeld’s English adventure took another wrong turn. A loan move to homeland outfit Bochum led to a permanent move in the summer of 2015 and he’s still there, happily plying his trade in Bundesliga 2.

For all the highs (he scored a lovely goal against West Bromwich Albion) and lows he experienced on this side of the Channel, the player maintains he had a great time working with Arsene Wenger.

“My personal opinion is that he is a great manager and hopefully we will see him in Germany,” he told Will Magee of i sport.

“I really like him, not just as a manager but as a person, you know? He’s a very good person.

While first team opportunities were a rarity for a player who consistently shone at reserve level, he holds no grudges.

“Arsenal had great players at the time – we had [Tomas] Rosicky, [Jack] Wilshere, [Aaron] Ramsey – and it was really tough to get much playing time.

He added: “At Arsenal you are basically just training with the ball and I like to have the ball, so it was good.

“You had to look up to those players who were playing there, so I still think it was the right move for me at that stage. It improved me technically, definitely, 100 per cent.

“Then under Magath [at Fulham] it was lots of physical work and stuff like that so I had both sides of the game – at Arsenal the football side and then at Fulham under Magath the physical side.”

It’s always good to hear that players still feel like they developed at Arsenal even if they never got the chance to hit the heights they might have hoped.

After an evening where several teenagers made their debuts for the first team, it also serves as a timely reminder that for all the hype in modern football, a taste of the big time is not a guarantee of a long-term future basking in its glow.

If you’ve got a spare five minutes, you can read the full interview with Eisfeld, here.

So many youngsters don’t make the step up. Those who do are the exception.

Like those that can talk positively about the club afterwards.

I get why our players were so soft under Wenger because they were not doing much of the physical training, just juggling with the ball. No wonder they were easily shoved from the ball by players like Mousa Dembele, Matic and Fellaini. I always got pissed each time Dembele pushed our players.

To be fair .. Moussa Dembele can shove just about anyone .. best natural dribbler in the league

I know this is probably an oversimplification, but… “At Arsenal you are basically just training with the ball”

Looks like that’s one of the problems Emery’s trying to fix right now.

You’ll get downvoted for it, but it’s honestly true. Not sure why some fans are in denial about it.

Eisfield was saying it in a positive sense, but it’s been clear by even Emery that we seemed to focus mainly on attacking with the ball.

Felix Magath and his wheel of cheese