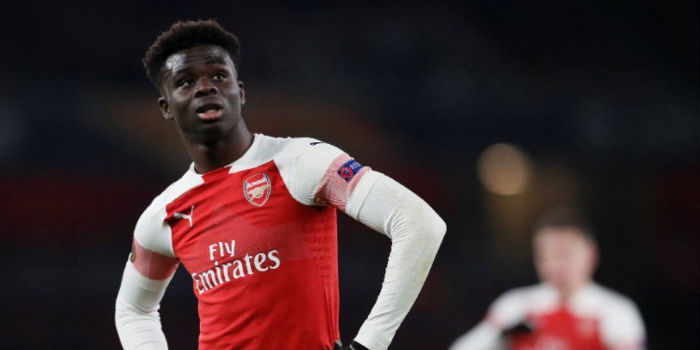 Bukayo Saka says he’s going to keep working hard in training to earn more first team opportunities after impressing on his full debut for the club in last night’s 1-0 win over Qarabag in the Europa League.

With nothing resting on the outcome, Emery took the opportunity to give game time to his teenage academy contingent, fielding Saka and Eddie Nketiah either side of Alex Lacazette and Joe Willock just behind Mesut Ozil.

The experience was a dream come true for 17-year-old Saka who came close to capping his full debut with a goal only to be denied by a save late on.

Speaking to Arsenal.com, he reflected: “It is a dream come true, ever since I joined the club at the age of eight I always dreamed of playing at the Emirates so for all the coaches and the fans to support me tonight was really good.

“I didn’t start too fast but I grew into the game and that’s what I wanted to do. I started to get past my man and create chances and I could have scored at the end, I don’t know what happened.

He added: “I think I just need to keep playing well at academy level and any chance I have an opportunity to train with the first team I need to impress the head coach and show him what I can do, so he can believe in me like he did tonight.”

Having never reached a higher level than the Windsor Merlins under-12s, it’s hard for us to imagine the excitement that comes with being told you’re going to play for Arsenal. For Saka, the experience was one shared with his entire family, who then had to ensure he got some sleep the night before the game.

“I think it was Wednesday in training, we went through the team and [Unai Emery] called it out and I couldn’t believe it, but I just had to get on with it.

“I just focused, and I couldn’t stop thinking about today and how I was going to play, and I think it turned out alright. But I should have got my goal!

“They [my family] were buzzing, they couldn’t stop smiling last night but they got me into bed early and we are all just so happy.”

Obviously, there’s a long road ahead if Saka’s to establish himself as a bona fide first team wing option but it’s a promising start for the lad. He’ll likely spend the rest of the season at London Colney fighting for more opportunities in the cup competitions and, depending on how that goes, he could well be weighing up a loan move next year.

It was interesting how Emery spoke of his qualities and how “it might help us”. Saka has a unique opportunity; he is both highly talented and has skillsets that this team is currently lacking. It’s similar to how Iwobi broke into the team. Currently our first choice wide player is Iwobi (right footed). We currently don’t have any viable back up to him, especially now it seems Auba is now back as a CF. We really need a secondary wide left player, and not only is Saka left-footed, he can only play as a full back (meaning he’s decent on… Read more »

He certainly left a huge impression on me… I hope he keeps working hard and someday, become an icon for the Gunners. We are in dire need of wingers tbh

Agreed. Even if we buy a winger I think Saka and Smith Rowe (what a brother knows) will get chances.

Certain glimpses of how useful it could be for the team to have an established skillful winger in the side. We still lack players who can change the game by taking on players.

From what little i’ve seen of him so far, seems he is an exciting player, the type that can become a fan favourite quickly, if they are in form, because of the exciting they can do with the ball…much like Reiss. He still has a long way to go though, but you can see the raw talent is there…technical competency on the ball, …like all our academy students, and in addition, pace, trickery and an eye for a goal. He just needs to stay focused and not let all the hype get to his head, else he could become another… Read more »

I posted this earlier, too. Lets assess the situation. Kos – 33. Coming back from injury. Can at best play intermetiently as CB the next season and a half. Montreal – 33 (in Feb). Coming back from injury. Can play LCB, LB and of need be LWB. Versatile. Can play a season and a half at this level ( hopefully ) Mustafi – 26. Decent CB. Minor injury. Should be back by the game after Southampton one. Here to stay, till we find a better one. Sokratis – 30. Good CB and RCB. Can give us 3 seasons at least,… Read more »

Hahaha, rubbed my eyes when I saw it wasn’t Santori

Really nice one for the young lad. Hope he keeps his cool and keeps making progress. Might just turn out to be the next big thing coming from the academy.

Hope he chooses to play for Nigeria in future too, follow the steps of Iwobi…

Unlike that Alli dude

The promise of youth/academy players under the Wenger era, (particularly the latter period), there was a lot of talk and not enough follow through. There were a couple of obvious exceptions, AMN, and Iwobi, but it just looks different this time. I’m aware how hard it is to break thro at this level, but I think there’s a few real prospects here, young players that have confidence and are a little bit more physically ready. Critically, I believe Emery mite be braver with them as well, and I’m not criticising Wenger here………I just think our new manager trusts his own… Read more »

Great potential and attitude for a young man. Looks decent on the ball too and a potential wide option for the not to distant future. Meanwhile, we also have Ozil mysteriously returned to squad but I guess some people prefer not to be reminded that they were speculating his departure and larger issues than a simple back ache. How gullible can some people be? Ozil’s return to squad is only a positive for us. In the 3-4-3 : We have now option to set up in a triangle with Auba or Laca leading the line and Mhki or Ozil with… Read more »