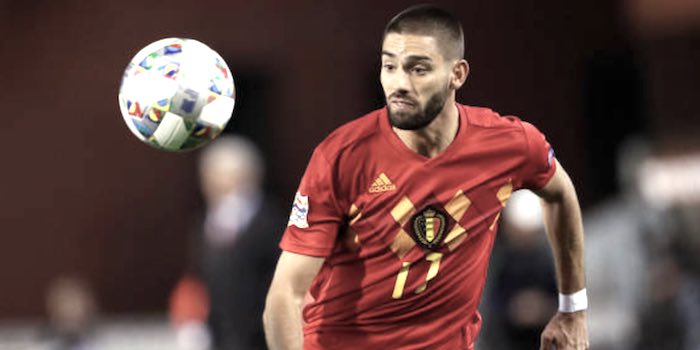 Arsenal’s eagerness to recruit a bona fide winger before tomorrow evening’s transfer deadline seems to boil down to a choice between Ivan Perisic and Yannick Carrasco.

Rumours linking us to the latter surfaced at the start of January but died down when the Gunners hierarchy made clear that we’re only willing to commit to loan deals. The 25-year-old is also on mega-money at Chinese club Dalian Yifang, said to be in the region of £150,000-£200,000 a week.

Despite all that, Carrasco – a Belgian international who has previously played for Genk, Monaco and Atletico Madrid – appears to be back on our radar, in part because Inter are playing hardball over Perisic, but also because his owners are open to a possible loan arrangement and could even subsidise some of his wages.

As the Evening Standard points out, somewhat ironically, a Carrasco move to Arsenal could depend on Perisic joining Dalian Yifang. The 29-year-old, who has seemingly been offered to pretty much every club with an open transfer window, has been identified as a like-for-like replacement.

Our ambition is obviously to get back into the Champions League ASAP, whether Perisic or Carrasco is the better man to help us achieve that is anyone’s guess at this point.

Carrasco scores more goals and is much younger. If there is some idea of a permanent signing, this is a much better option than Perisic.

It’s mind boggling that this will even be a debate. If this story is true that Carrasco is a second option here, I will have even less faith in the new people running this club. Carrasco will go for at least 50m in a normal situation. The fact that he is available for half that and there is still a debate about it is shocking

If I remember correctly, carrasco was very much out of atletico’s starting eleven. I’ve only seen him a few times and never been impressed. If it’s a loan we’re talking about, with an option, not an obligation to buy, then I’d choose perisic

Not even when he scored against us?

Dave to be fair pal, I could probably score against us and I’m pushing 40 and reasonably unfit.

No. It looks pretty easy to score on us

Perisic has less goals and assists with more games than Iwobi this season.
Doesn’t stop there either, he also has a higher turnover, less dribbles, less key passes, creates less chances and tackles less than Iwobi.

Better off just keeping Iwobi. Or better yet, get this guy.

I think that’s way more than Carasco is worth. I’ve seen him a lot and I was never a fan, kind of the opposite. I’d much prefer Perisic, as I’ve been a fan of his since WC 2010. I think he’s technically way better, and scores big goals, and as far as age, he has a few years left at the top level which is exactly what we need. So it is fully up for debate, don’t just assume your ideas are what’s true.

Pretty sure we aren’t getting either. All this talk has just been to get Suarez’s loan deal over the line.

Are you going to believe Ornstein over me??
It’s Suarez plus no one. With a possibility of a deadline sale of ElNeny

Let's have some arsenic instead
Reply to  Lord Bendnter

Bow to the lord.

It’s the same old Arsenal. Fool the public with these rumours and end up with nothing or close to nothing. This club is being milked by Kroenke and will be thrown away when its use is done (when profits dwindle as attendance drops and subsequently sponsorships dry up). That’s a good 10 years away though, till then enjoy the mediocrity packaged as a PR package of future excellence. It’s not a football club anymore, it’s a corporation.

We have bought Aubameyang, Lacazette, Torreira, Leno, Sokratis, Mkhitaryan, Kolasinac and Guendouzi since the start of last season. I understand that people are frustrated with all the injuries and the stretched squad due to that but to act as if Arsenal doesn’t invest and is just fooling people is nonsense.

Yes and 5 of those buys are either panic buys or underwheloming signings for a club aiming for the premier league. I do understand that the premier league is a long shot because of all the organizational changes and flux the club has been through but the message from the top is what worries me: No money for January deals and cost cutting in all departments. It’s a good concept for a corporation but not so much for a football club in the premier league. The self sustaining model (especially with the current crop of players) is not commensurate with… Read more »

Agree in many ways but more optimistic than you in one way – i think kroenke will be gone in 2-5 years, leaning towards 3. The world moves quicker now!

Ever since the new era began, most of the links we hears are accurate.
If you check the articles here on arsebog you would see the pattern.
A player is linked, confirmed by Orniestein, then his agent or club would confirm at least that there is interest for him.
During this months there was a clear plan (midfield+winger) only on loan with no obligation to buy. And all the news are consistent with this.

And even the bad rumors, (Sven), (no money to buy) and (no defenders).. all being confirmed.
The club is more transparent than before.

That would be a waste of £2billion if he left Arsenal to rot. He’s not that stupid

We’ve been fed too many transfer rumors we are now constipating.

Lack of Perspective
Reply to  Gooneron

haha. The fact we are in the process of constipating and have not yet reach the constipated state, pleases me.

YES! A defender! Kos is a very good player, a great captain but can we rely on him for the rest of the season? I fear no. Mustafi yesterday got a lil injury, wait and see how it’ll go on. Lichtsteiner is not reliable at Hector’s place. Hector out, Rob out, Papa absent until end february… I’m not sure we can rely on Dinos for the rest of the season. So hearing about a defender makes my day ! Thank you !

While Carrasco would no doubt make a better defender than Mustafi, he is in actual fact a winger.

Certainly more useful than Lichsteiner or Elneny or Jenkinson. I would consider replacing those first.

No doubt it was Mustafi that made us lose points to BHA, Soton, West Ham.

*Mustafi slide tackles your comment, but misses, and gives away a penalty.

Me and my housemate where joking about mustafi slide tackles.

Then he slid and blocked a certain goal a minute later, the cunt. Shut us both right up.

Monreal is a fine stop gap until Koscielny and Sokratis are back. Mavraponos can play the Europa games against Borisov.

I didn’t see any issues with Mustafi in fact he put in a game saving block on Niasse and covered a potentially dangerous cross by same player when Monreal got his off side trap wrong first half.

And why is there no talk of bringing in a defensive player? Why all the concentration on attackers? Our defence has been sh**t, and has now been made worse by unrelenting injuries. Or are there no defenders out there we can loan?
Honestly I don’t get all the noise about all these mediocre players when going forward has been less an issue with this team than locking the rear.

Emery seemed to indicate that with defenders due to return from injury, he’d have too many at that position if we added another in January.

I guess because we have 2 pretty good experienced cb’s in Kosc and Sokratis and 2 promising ones in Holding and Mavropanos. Additionally we still have Chambers who’s doing really well at Fulham although he’s playing in central midfield. And we even have Mustafi who’s probably on pretty high wages and therefore we need to offload players first in order to bring in new ones in that position.
Regarding wide players we only have Iwobi and Mkhitaryan. Welbz will be gone next season. So there’s definitely a need to invest, regardless injuries.

We have a decent defender in Mustafi.

We did not slip points to West Ham, Soton, and BHA bc of him.

Game saving block yesterday against Niasse and bailed out Monreal first half when the Spaniard got his off side positioning wrong.

Yes you hit on the point sir especially we need to sell out player like chaxa,ramsey, Petr chec then we buy some player especially carrasco and Suarez plus one defender and goalkeeper then the team will be perfect. A team like arsenal to line up is easy unless there’s a personal problems and one things i need a help, anyone knows an email or contact number of Mr Emery please send to this number +264813311099

Always been a fan of Carrasco, he’s a better player than Perisic plus he’s still young so can either be a good player for us long term or if not he’ll have some resale value, however I’d be surprised if we got either.

Carrasco and Dennis are players with ability to engage players one on one, something we only have with iwobi at the moment and possibly Lacazzette

The best part of this article is point about getting back into the CL ASAP, hope the hierarchy genuinely have that as the ambition for this season.

It’s between the Tots, Chelsea, us and ManU for the final 2 spots, get one of those spots and with the EL title to boost it would be a great season and transition complete.

I don’t think the transfer team would buy with that in mind. They have been poor thus far.

We should have got Mahrez if we were serious about getting into CL last Jan PLUS A Cback.

If we don’t buy well now it jeopardizes our chances in the summer in market and it’s a self perpetuating cycle.

Carrasco nominally operates from left. Iwobi is right footed but is best inverted from left. He may have function on both wings. Nelson can come in on the right. Mhkitaryan should we keep him if Ozil leaves in summer, has function backing up Dennis in an advance role or utility as a mid-wide player. Right side midfield has been an issue for MANY seasons now. Even with Alexis around we were critically unbalanced. Hopefully we can bring Carrasco in bc we also lack dribbling ability t the moment beyond iwobi and possibly Laca. It forces us to pick passes. A… Read more »