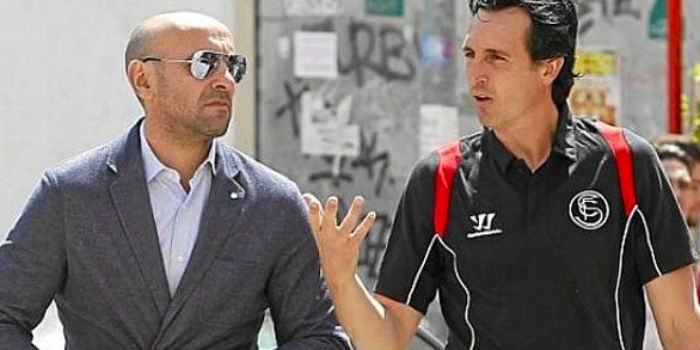 Unai Emery was full of praise for former Sevilla colleague Monchi but refused to be drawn on whether Arsenal could lure his compatriot fro Italy to the Emirates.

Over the course of 17 years, Monchi, fulfilling a sporting director position, made a name for himself in La Liga developing Sevilla’s youth system and implementing a vast scouting network that lured the likes of Dani Alves, Julio Baptista and Ivan Rakitic to the Ramon Sanchez Pizjuan.

For three seasons between 2013-2016, Emery worked closely with Monchi at Sevilla before both men went in search of new challenges; the former to Paris Saint Germain and the latter to AS Roma where he continues to ply his trade.

It’s been suggested in recent days that a reunion could be on the cards with Arsenal eager to fill the void set to be left by the outgoing head of recruitment, Sven Mislintat.

“I can only say to you that he’s working in Roma,” said Emery at his pre-Manchester United press conference.

“I worked very well with him in Sevilla for three and a half years, and very well too.

“My relationship with him is good but this work is for the club and the issue is the club’s responsibility. I can say to you only that he is a good person and a good professional.”

On suggestions that Raul Sanllehi and Vinai Venkatesham could be tempted to make a swift appointment, Emery went on: “Maybe if you do this recruitment very quickly, maybe you can make a mistake.

“I think it’s better to do without that, being calm and also finding the best possible person to do this job like we want. I think the club is working on that.

“It’s not my issue. I can say the same: if the club decided to sign one Sporting Director, then I will agree with them.”

Monchi, who still has two years left on his deal with Roma, has been quick to dampen speculation.

“I know my name is being associated with Arsenal but I am concentrating on my job with Roma,” he said yesterday.

“However it is a pleasure being linked with a club like Arsenal – but it is not first time that happens.”

Emery also reserved warm words for Mislintat with whom he only has a couple more weeks to work. The German was on the three-man panel that appointed the Spaniard this summer but is understood to have grown frustrated by the evolving structure of the football operations outfit at the Emirates following Ivan Gazidis’ exit.

“It’s a very short time that I worked with him but I worked well and pleasantly with him,” reflected Emery.

“I think he has big experience in Germany and here, and it’s one issue in the club and the club is working on that. I can only say to you that my experience with him is positive and is good.”

Good thing he stated the problem is between Seven and the club… i.e. Raul.
Fans should take note of who is accountable for what, in this new regime. Lest they raise the “out” signs in the face of the wrong man and miss the real culprit.

Mslintat AND Raul have both thus far been underwhelming.

All these ex Dortmund players at 30+ have saddled the wage bill with less resale value.

On top of that they panicked and extended Ozil for too much whilst not extending Ramsey last Jan.

Again Mahrez would have filled the need on the RWing which has been outstanding for several seasons but we went instead for Mhkitaryan. Wholly unnecessary and likely Mslintat’s doing.

No, we didn’t sign Mkhitaryan instead of Mahrez. We swapped Mkhitaryan for Sanchez which was decent business considering Sanchez wanted to leave anyway. And we bought Aubameyang for 60 million, instead of buying Mahrez for 60 million, and it’s pretty clear we made the correct decision there judging by how many goals he’s scored in the last 12 months for us.
Why do you worry so much about resale value? We’re The Arsenal, we’re not supposed to be a selling club.

So signing Aubameyang, Torreira Guendouzi and the experienced Sokratis plus the promising Mavropanos underwhelms you? With the lack of funds available I believe he has done a great job. Maybe Lichtsteiner and Leno were mistakes but overall he’s been a great success

Blogs, is there any way for users to put other users on ignore? Getting really tired of Santori’s relentless comments. If he’s not blaming Emery and Sven for something unrelated to them, he’s writing essays on how much he hates Elneny.

Agreed Faisal! It’s regurgitated drivel on every single article. Might not always relate to the actual article either.

You again! With the Mahrez wankering!

I agree but I’m concerned by Emery’s “It’s not my issue”. I kind of want him to be a little angry if there isn’t a head of recruitment. He should be desperate for this to be sorted so he’s got the best chance of getting the best possible players. How far is “It’s not my issue” away from “It’s not my fault the club is failing. It’s his.”? This is not aimed at Emery alone but at all the ‘leaders’ of the club. If we’ve got everyone arguing and saying “It’s not my issue”, we end up with a load… Read more »

He is a thorough professional genius. He knows his responsibilities and asks for what he needs to do his job and won’t let his professionalism and name come into doubt. He’ll resign before that.

It could also be a line to satisfy the press who will of course keep asking the question. I’m sure behind the scenes he does care and he does have an input to the discussions about who should be employed but by giving a personal opinion on an area that technically the club have employed someone else to look after is undermining the club management authority.

Makes complete sense to bring in Monchi. Someone with a level of trust and understanding with Unai is what is needed. Mslintat and Raul have thus far failed to deliver correctly for BOTH Wenger and Unai. They have not taken strategic view into account or the tactical needs of the squad. Rwing has been in need of reinforcement for several seasons now. Cback has not yet been resolved. Even at keeper, Leno is just OK. He doesn’t even make third choice for Germany. And we seemingly feel at ease to relinquish Cech early. I’d try to extend him for another… Read more »

I am pascal cygan
Reply to  Santori

Are you sure thats long enough for today? Ive seen you write a book here on the comments before.

High gooner
Reply to  I am pascal cygan

Im surprised he didnt mention mustafi.. Santori are you okay?

Why are you ignoring Torreira, Aubameyang and Guendouzi?

“Too many fans want to belief their own narrative. Reality is wholly different”

You’ve been pushing your own biased narrative non-stop in over long posts on a football blog. Not only do you have a problem distinguishing opinion from fact, you also come across as a massive prick.

Leno is bloody good I reckon…. From what I’ve seen in the past he’s way above the rest even cech…. And weve had some great keepers in the past decade ?

You still seem to think it is Arsenal’s fault that Cech is “leaving”!
Petr is retiring. That means he is going to stop playing for any team which removes your option of keeping him on for another season.
I do agree that Leno has yet to convince so either Emi’s loan is to prime him for playing next season or it is a shop window exercise.

Would be a great addition I think, follow italian football a wee bit and Roma recent young signings like Under & Pellegrini are quality. Unless he was involved in letting Liverpoo have Salah for 30mil in which case i take it all back

would be a great addition. With whatever little i know of monichi, he has managed to consistently find quality players that didint cost much . Right now in Roma they have a bunch of such quality young players who they can sell for shit load of money like cengiz, zaniolo, kluivert. I was dissapointed that we didint go for him after he left roma (during when we appointed misliniat who is as well regarded as him). But now would be the right time, with a spanish manager who is also monchi’s friend as well as Raul this could be an… Read more »

By the sound of Emery’s interview, this is another Monch Edu about nothing story.

Is it too soon to say it? Nah, fuck it. I’ll say it loud and proud. THERE’S ONLY ONE ARSENE WENGER!!!!

So in 17 years he unearthed Dani Alves & Ivan Rakitic.

Yay, in 8 years time he might find us a decent winger.

He has a prestigious record of good signings and the 2 you mention are the tip of the iceberg.

I think Monchi would be the dream appointment. Not sure it will happen though. Man U after him also apparently

What are they smoking over in the Emirates? because Emery has the Monchie’s

?Where’s my early morning blog, Blogs?! I feel like just cancelling my subscription ?

I guess it’s too early for some people. Prob should have put a ? at the end.
Got my fix anyway, thanks Blogs!

Blogs is on vacation. Someone else is supposed to post but we’re still waiting… Be patient.