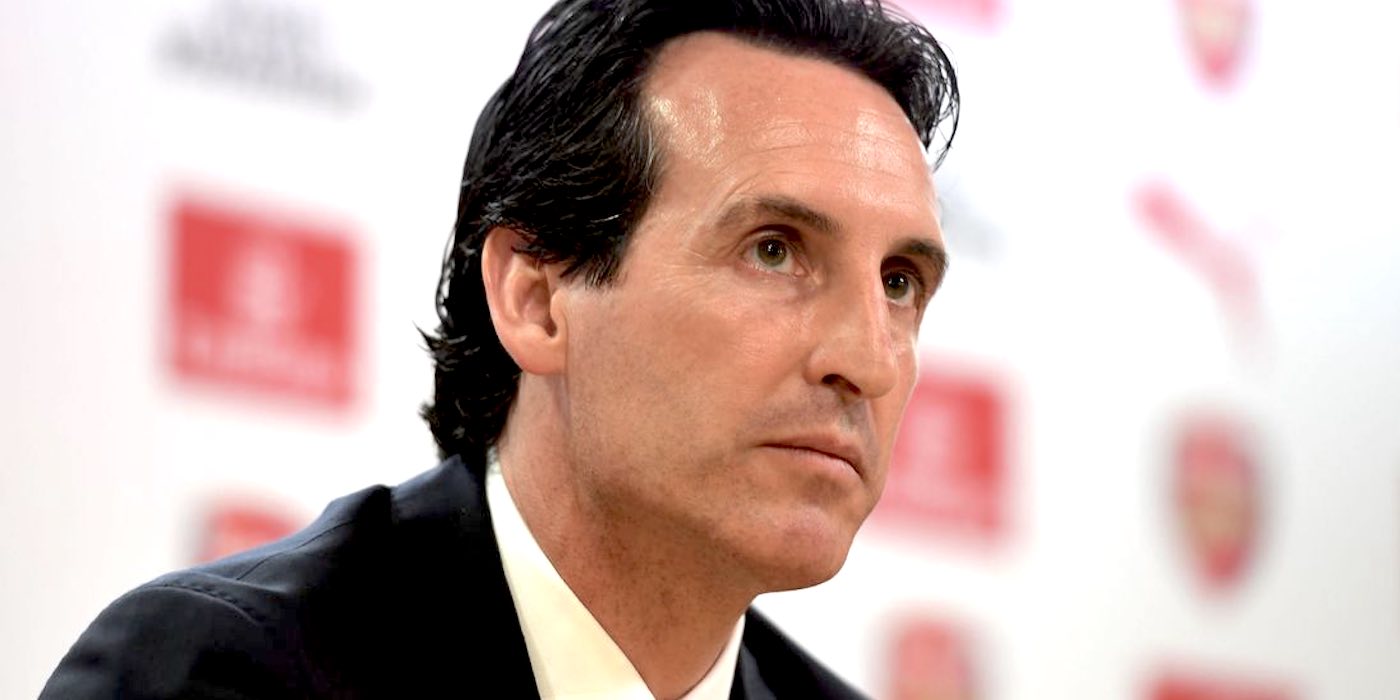 Rumours linking Arsenal to Barcelona’s out of favour attacking midfielder Denis Suarez have been doing the rounds for a couple of days now, and after tonight’s 3-0 win over Blackpool in the FA Cup, Unai Emery didn’t do much to dampen that speculation.

The versatile 24 year old can play on either flank, or in the middle, and he’s a player Unai Emery knows well from his time at Sevilla. He played him 46 times in the 2014-15 season, and with Arsenal in need of reinforcements this month he’s certainly a credible candidate.

There are some suggestions the clubs are discussing a permanent deal worth around €18m, but a loan move might also be a possibility.

Despite saying he didn’t know if the arrival was imminent, he did hint at the deal when asked about transfers following the game at Bloomfield Road this evening.

“I think the club is working on the possibility to bring in some players who can help us during this next four months of competition,” he said.

“It’s a different situation. If the transfer market can help us find a centre back, the possibility to bring them in is not easy because we also have Mavropanos coming back from injury.

“If we have the possibility to sign some important players, we can do it. At left or right wing, perhaps one player can help us in this position.

“We will only sign players who give us quality.”

Sounds a bit familiar, but let’s see what happens this month! In the meantime, why not check out the player ratings from tonight’s game ???

10 years of Ramsey and this could be a refreshing change.
We will have something new to complain about now, bring it on ?

Where have you been all season? Emery is seemingly enough of a complain for fans now. Every decision he makes is now contested.

Im all up for an A.I. manager making decisions via online polls hosted on Arsenal FanTV.

Happy to see reaction to a top player leaving. Maybe they pulled the contract to set a precedent to other players in their last year and maybe because they had Suarez in their sights.

Either way, welcome news in my opinion.

I really hope we don’t sign Dennis Suarez… Sure, we’re losing Ramsey, but Suarez real strengths are passing and crossing (via whoscored) with major defensive weaknesses and no goal threat. I’m alright with having Ozil for that kind of profile and getting someone more rounded instead

Cries out for a winger. Arsenal look set to sign a winger who’s specific strengths are crossing and passing. Moans about signing a winger.

I don’t understand the logic of some of our fans…

Maybe they are different fans asking for different things… crazy thought I know.

‘The Fans’ are not one big amalgamation, a giant blob asking for one thing then the opposite a second later.

But Emery’s modus operandi is having wingers or fullbacks bombing forward to the byline for a cross either across goal or for the cutback. We don’t have enough players with that ability.

How close is Raul with Messi?

they are as tight as bendtner and his ankle tag!

He is two footed….. The last time we had a player of such quality from Spain, he became a fan favorite…..

You should see his latest outing against Madrid. Half a Cazorla still better than what Arsenal has now

I’ve never actually seen him play. Have you/ has anyone else?? They’ve not got a particularly good record of signings in the last 5 years or so..

No top midfield in the world is complete at the moment without a Spanish touch. They seem to have mastered the art of midfield like Italian did once with defense..

…and we almost bought a Suarez

I think I’d go for a loan option if possible to see if he can make it in PL, after all he’s not a first pick there at the moment. Mind you, £18m doesn’t even get you a reserve Liverpool striker (Solanke £19m to Bournemouth) these days.

Sanchez wasn’t a first choice either, but he turned out to be our best player before his ego got in the way

I think it was revealing when Emery said “I think the club is working on the possibility to bring in some players who can help us during this next four months of competition”. It sounds like the language one would use when thinking about a loan, rather then a permanent addition to the squad. Hopefully it’s a loan with an option to buy, like Dortmund had with Alcacer. If Suarez burns up the premiership, we sign him, if he flops then he’s Barcelona’s problem.

Brian bodycat
Reply to  Ya gooner

Could be applied to any signing, ever.

Wengerballz
Reply to  Ya gooner

Exactly! Let’s sign him up and if he turns out to be not good, unsign him

Damn it!… Emery words don’t fill me with confidence….Don’t tell me Denis Suarez is our answer to the wings… For God’s sake he is not the winger we need…..i thought he was supposed to replace Ramsey in midfield and then we get a proper winger……. Now things are really getting messy at arsenal

Does even anyone know how much money we have to spend?

How much do you have on you at the moment?

Pretty stupid if they made that figure public wouldn’t it

I know mate what you mean. I will ask differently, do they have some significant money on them? I really doubt that.

Just spoken to Stan, I demanded to know how much we have to spend, long story short, he’s asked if he can borrow a fiver off you.

Greedy bastard but then why not? Our budget will double, won’t it?

Good on you Emery. Basically asked for a winger and CB.
P.s: I was hoping he would say top top quality 🙁

I would go one better and say he’s just revealed the positions and total count of our January targets.

I think he has his own isms

I saw another comment somewhere saying Denis Suarez is just a Barca reject gone the way of Munir, Montoya, Deulofeu etc. However having watched a fair few of Barca’s matches I’d like to contest this and say I’d be happy to see him sign. Not getting a chance at Barcelona is hardly the sign of a poor player, for example Alexis. Suarez hasn’t had many chances to play, which means he’s not had the chance to show what he can do, but the fact that his time at Villareal and Sevilla (when he did get runs in the team) convinced… Read more »

Considering we have barely anyone who can dribble with close control and we supposedly have hardly any money, I’d be very happy to ge Denis Suarez.

He’s such an Emery type player as well; technical, nimble, clever, I think this could be a good move.

He has no problem pressing or running around for 90 minutes, so that’s a positive.

I’d prefer we signed a defender but if we’re going to get a midfielder, then I’ll take Suarez over Banega.

Banega is a much better player. No comparison.

The sooner the defence is strengthened the better. Its better to have it done asap.
The former manager didn’t bother about defence and was interested in only
attack,attack attack.Thats why when he is stifled he says such teams play anti soccer.
Only a stupid manager with an injured squad will play attack against a top team.Thats why he was massacred 8-2.He shd have been axed there and then.

Liverpool scoop 19mill for Solanke. Got 15mill for Ibe last year. City 22mill for Diaz who has 6 months left on his contract. Arsenal can’t give players away ?

Actually, Arsenal excel at giving players away. It’s the one thing we do better then any other club in the world.

Well, when the last manager said that, we signed Petr Cech and no field players in the window. Good news is we already have Cech. Bad news is we were linked with Navas.

Loan deal with option to buy would be preferable. I think everybody is sick of wasting cash on permanent stop-gap solutions. If he turns out to extremely useful then seal the deal but I don’t think we should blow money in this window chasing top four. Money is better spent in the summer.

I would rather see Smith Rowe, Willock, Dragomir or Amaechi be given a chance and the money spent put to a better use i.e. signing a top quality central defender. We will also have Reiss Nelson back at the club in the summer which, will (and quoting Wenger) be like a new signing for us. There is a real wealth of talented young midfield players at Arsenal and a dearth of talented young defenders (Sheaf and Tutu being exceptions). Until a balance in the development of defensive and attacking players can be found we need to bring in defenders and… Read more »

EZD
Reply to  Me2

Sadly, despite having the best player name (or fantasy villain name) ever, Vlad Dragomir has already left the club.

I’m hopeful that one of two of those youngsters will make the step up to the squad. But it’s a very big ask for one of them to replace Ramsey”s contribution right now, especially given Ozil seems out of favour. They’re still teenagers.

Psst.. Suarez is all but done. Loan then perm14m Euros. Wallop! Good player!

I think if he comes in and we move elneny on then is great business. I think we’ll need another centre mid as well to replace Ramsey. Bringing in a centre mid now though so we can phase another one in more slowly at the start of next season seems like good squad management.

Elneny is a very good squad player. We need him imo.

The Neny has not covered himself in glory this season when he’s had the chance to play. I’m 50-50 on him staying.

That’s an apples to oranges comparison. Mkhitaryan would be a little closer to Suarez then Elneny.

Dennis Suarez certainly fits the bill for us somewhat.

Probably will be a versatile selection with potential ability to cover deep midfield and carry the ball for us or play further forward in lieu of Ramsey departure and Ozil injuries or maybe even some function in the wide areas where we lack options beyond the excellent Iwobi that can engage opponents one on one.

I’d like to see him at Arsenal, but I think the price is quite high. He’s a player who played 19(!) minutes in La Liga after half a season. Barca have no plans with him, they’re signing Rabiot and probably F. de Jong. They want D. Suarez to move on so I think Raul and Sven should lean in and get him for under 10m.

If we can not gamble spending 20 m on Suarez to get into champ league which would earn us 50 million. If we can not risk 20 m. We might as we give up. On catching Man City. It sounds like the same type gig pockets as in wenger ( unsuccessful) days .
If emery wants him for europa league get him