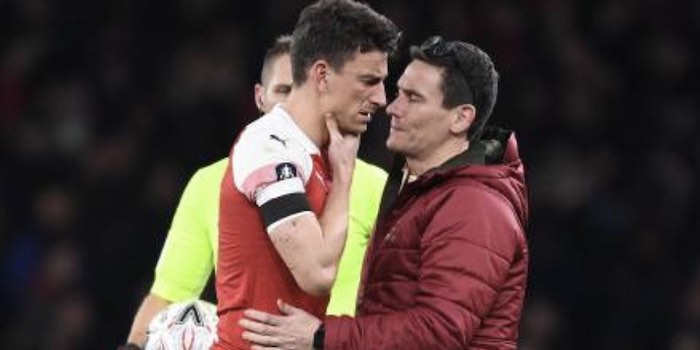 Arsenal have confirmed that Laurent Koscielny has returned to full training following the facial injury sustained in the FA Cup defeat to Manchester United.

The Frenchman revealed earlier this week that he underwent a minor surgical procedure to remove blood clots from his jaw after hefty contact from Romelu Lukaku’s foot.

Thankfully, nothing was broken and the swelling he sustained has gone down significantly. Our captain’s return – he missed Tuesday’s win over Cardiff – is particularly welcome given we face Manchester City at the Etihad on Sunday.

There’s an outside chance that Ainsley Maitland-Niles and Henrikh Mkhitaryan could also be fit. The former took a bang to his right knee in training on Monday, while the latter broke a metatarsal against Sp*rs in December. Both are on the mend.

Elsewhere, the medical team have confirmed that Hector Bellerin’s trip to 1982 for surgery has been successful.

The Spaniard went under the knife to repair the ruptured ACL suffered a couple of weeks ago. He now faces six to nine months of rehab meaning he’ll be back for the tail end of Terry Neil’s time in charge of the club.

If I was going to War, I’d want Kos beside me

Or in front. I’d run behind him… for leadership and cover…

He’s the one who always gets hit!

Operation Get Behind The Frenchies

Have you ever heard of the Emancipation Proclamation?

I don’t listen to hip hop!

Even on the nuts against Chelsea.

Love the bellerin back to 1982 quip, very good.

It’s not only him – although this jacket is a classic ‘Ector – the room and the equipment that you can see also looks like the eighties.

I’d like to say he seems to be in good hands, but those guys look like car mechanics, and the one on the right looks like his giving that knee an oil change.

Love the line about Hector’s surgery. It looks like something that could’ve been in my mum and dad’s photo albums from the 70’s/80’s.

Your parents took some peculiar photos

You should see some of my dad’s outfits from the ’70s if you think Hector’s clobber is bad.

In the early seventies I had some lovely flowery shirts and ties, and 3 inch platform football boots for games in the playground.

Arsenal to pile more misery on Guardiola on Sunday; I believe.

As stupid as the saying is, I think it really is the “best time to play them”
COYG, time to expose that bald fraud!

…but those other teams did some defending too!!!!!

Worrying that AMN is banged up and only has an “outside” chance for the City game.

If he isn’t fit, the choices are poor between the over the hill band aid Lichsteiner and one dimensional Jenkinson.

Of the two, I’m leaning toward Jenkinson for fitness. At very least he can stick to a game plan and be less adventurous, watch the defensive end.

BUT going forward, our lack of any right sided threat will also be an issue.

I know Jenkinson is not great but certainly not one dimensional. He’s good going forward and is provably our best crosser.

…and he has a perfect record as a goalkeeper.

Watch the defensive end? Is he going to be lining up as quarterback on Sunday?

How many months to fix the hair?

Not sure if 3 at the back for security or a flat four with midfield diamond (like we did against Chelski) would be best. Perhaps it may be a combination depending on phase of the match and other issues (injury, tactical or opportunity wise) If 3 at the back it should be Monreal-Koscielny-Mustafi Like to see Torreira and Granit hold together. Granit in particular is key bc he spots and switches focus of our attack very well. Torreira has to pick his moments going forward very carefully. Out wide, would think Iwobi and Kolasinac on left will be very critical.… Read more »

Once again tl;dr You might consider open your own blogspot. WordPress.com maybe?

This looks like one of my sister’s FB posts….Your not my sister are you????

Mate, have you ever thought of getting a girlfriend? If so, pound her like you pound your keyboard and she’ll be happy for life.

There was so much to read I thought you were Rambling Pete.

Knee is healing ok. Unfortunately, these doctors knocked him out and stole a kidney….

So long as they don’t steal is fashion sense.

You almost took Bellerin back to the art-deco movement… or maybe he was there already?

Ha, same era, but I was thinking surrealist myself. There’s a bit of a Dali-esque Cheshire quality to him there.

Could have done without the pic of Bellerin in his underwear, with a smug look on his face.

Any chance of sending Kane and Ali to a surgeon from 1746?

If you’re thinking bloodsucking leeches, we could lend them Stan.

Or maybe a Barber from around that time?

“Elsewhere, the medical team have confirmed that Hector Bellerin’s trip to 1982 for surgery has been successful.” Hahaha

No sence of humor some people,, like the -6 thumbs down people

“He now faces six to nine months of rehab meaning he’ll be back for the tail end of Terry Neil’s time in charge of the club……”
Where he can’t wait to link up with John Hawley and Lee Chapman in our next title push…..