THE LOWDOWN
Arsenal Women kick off their FA Cup campaign with a trip to fourth tier Crawley Wasps in the most curious tie of the whole 4th Round. The gap between the tiers in women’s football is far more pronounced than it is in men’s football- the Gunners beat Charlton 5-0 in December and the Addicks are 2nd in the Championship. Lewes are 9th (out of 11 teams) in the same division and were on the end of a 9-0 thrashing by Arsenal back in September.

Joe Montemurro’s side really ought to be looking at getting towards double figures against Crawley who, for whatever it’s worth, don’t even have a Wikipedia page. But the Wasps are in good form, to say the least, they have won every single one of their games so far this season and sit top of the Women’s National League Division One with 30 points from 10 games.

(1/2) Unreal experience to have had the Women’s SSE FA Cup trophy down with @CrawleyWaspsLFC ahead of our tie with @ArsenalWFC. Big thanks to @FA. Wonderful opportunity to inspire many young girls around a sport/football agenda on our tour of local schools. pic.twitter.com/7L4Fun7GJb

QPR Women are a division above Crawley and were defeated 6-0 by the Wasps in the 3rd Round. Arsenal however, ought to make short work of this match and, if the manager is so inclined, he really ought to be able to do it with a heavily rotated side. Although the U-21s do have a game scheduled on Sunday, so he might not reach into the academy to fill out the starting line-up.

TEAM NEWS
Arsenal will be without Lia Wälti and Lisa Evans, both of whom will miss all of February with knee injuries. Meanwhile, Katie McCabe was pictured in a protective boot at London Colney this week, which must make the Ireland captain a doubt. Danielle van de Donk has returned from a thigh injury, but Jordan Nobbs (knee), Dan Carter (knee), Jess Samuelsson (foot), Tabea Kemme (knee) and Viki Schnaderbeck (knee) are all out. Manager Joe Montemurro missed the Reading match with ‘flu, but he ought to be able to take his place in the dugout for this match.

LAST TIME OUT
The teams have never played one another before. Crawley earned the tie with a consummate 6-0 demolition of Queens Park Rangers in Round 3. Arsenal’s last FA Cup tie saw the Gunners defeated by Chelsea at Wembley Stadium in last year’s final. The Gunners got back to winning ways in the WSL last weekend with a 3-0 win away at Reading.

Arsenal have won the competition a record 14 times, having last laid claim to the trophy in 2016 when Danielle Carter’s swerving shot from range was enough to see off Chelsea. Joe Montemurro is bidding to become the 5th Arsenal manager to win the trophy, following in the footsteps of Vic Akers, Laura Harvey, Shelley Kerr and Pedro Losa.

PLAYER TO WATCH
Katrine Veje signed for the club in the January transfer window and, understandably, didn’t quite look on the same wavelength as her teammates in her first few games. But at Reading last weekend, the Dane patrolled the left touchline to great effect, making a mockery of the Royals’ narrow midfield diamond.

Time and again, Veje found space by hugging the touchline and two Reading defenders were booked for cynical shirt pulls as she wriggled past them. If McCabe is indeed injured, Veje becomes even more important, not least because she is one of the few left footers in the squad, offering greater balance. With Evans injured, Veje’s ability to commit full-backs becomes even more important and this is a good opportunity to create further connections with her teammates. 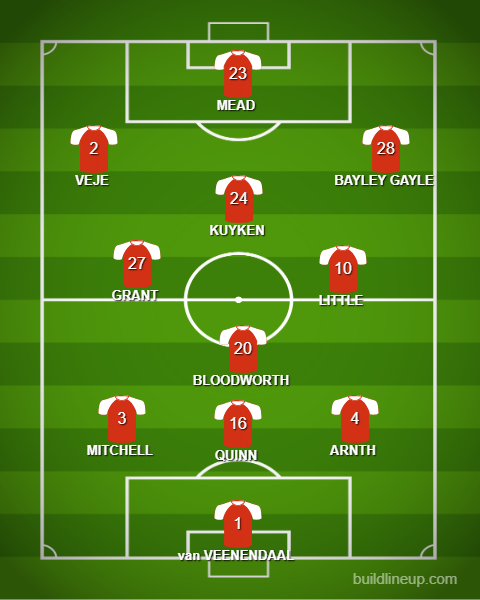 HOW TO CATCH THE GAME
The match takes place at Oakfield FC’s Tinsley Lane ground and the match kicks off at 3pm. It’s part of a double header that sees Manchester United Women play Brighton & Hove Albion at Crawley Town’s Checkatrade Stadium at 12noon that day. The match is all ticket and the game is not being streamed or screened live.

COMING UP
I won’t be at Crawley so we’ll not have match reaction on Sunday night, but we’ll have the usual Weekly Round Up on Monday, as well as a full match preview for Thursday’s Conti Cup semi-final against Manchester United at Boreham Wood. I will be at that game, so we will have exclusive match reaction from a player.

In case you missed it earlier this week, I spoke to Gunners defender Louise Quinn about increasing participation in and coverage of women’s sport, her time in Sweden, repealing the 8th in Ireland, the Ireland’s squad stand-off with the FAI over working conditions and her touching friendship with 13 year old Freya Fitzpatrick. It’s a great interview.

Thanks for the chat @Stillberto! ? always happy to chat about the things I'm passionate about! Although Freya may be annoyed because she's actually 13 ? https://t.co/yUnTqeOIER

Let’s not count chickens we know what can happen in the Cup!
I’d be happy with a Meado hat-trick and Ava Kuyken to score a first team goal before she leaves us.
This assumes that Vivianne is allowed to put her feet up for the weekend before rattling in another dozen in the WSL unless, of course, she fancies coming on for the last ten minutes to add to her hat-trick tally!

Cracking article/interview with Louise Quinn.
Just noted the comment from Peter Story Teller ……”Ava Kuyken to score a first team goal before she leaves us”. Her going would be a shame (and a loss to the squad) as she looks to be ready for a run in the side particularly with the injury list seemingly growing by at least one a week!!! Her WSL start last week against Reading was very encouraging particularly her skill on the touchline to release Beth Mead in a move that ultimately ended in our first goal.

I agree from the appearances this season alone Ava has looked a great prospect but unfortunately she has already signed to join Florida Gators in the summer for a 4 year scholarship.
Of course she could always come back in 2023 with more games and an education under her belt, not to mention a glowing tan, and she’ll still be in her early 20’s!

Thanks for that information on Ava Kuyken. It infers that she will be with us until the end of the season . Hopefully she can toddle off to Florida with a WSL1 winners gong on her CV together with Conti & FA Cups to boot!!!

Well I predicted the correct scoreline but I did not expect the hat-trick heroine to be Ruby Grant!
Congratulations to her.