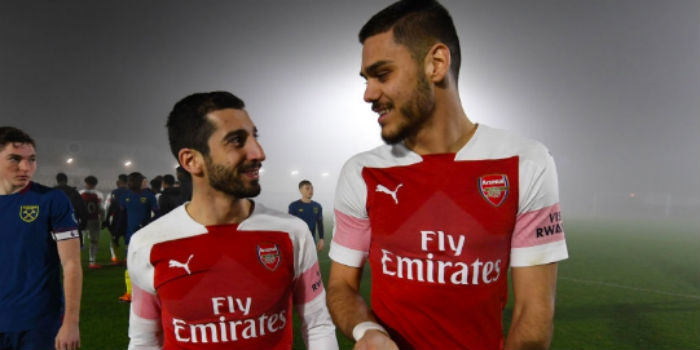 The Gunners, courtesy of goals by Eddie Nketiah, Joe Willock and Mavropanos, had put Freddie Ljungberg’s side in a commanding position at the break before conditions deteriorated.

It was Mkhitaryan’s first game since breaking a metatarsal against Sp*rs in the League Cup, while for Mavropanos it was a second game in two days as he added to the 15 minutes he got against Manchester City on Sunday.

On his way back to the team bus, Mkhitaryan thanked the medical team for helping him to work back to fitness inside six weeks.

“I’m thankful to everyone who has been working with me,” the Armenian told Arsenal.com.

“To the medical staff, to the fitness coach and everyone, even to my team-mates. They were supporting me every day.

“It’s life, everything is happening and you can get injured or something like that. I hope that no one gets injured any more and the team can be fully fit for the next games.”

Both Micki and Mavro will be hoping to force their way into Unai Emery’s thinking ahead of Saturday’s trip to Huddersfield Town. You’d imagine it’ll be an easier task for the latter given our defensive issues.

Does the signing of Denis Suarez complicate life for Mkhitaryan or will Ramsey and Ozil continue to be the fall guys this season? We’ll have to wait and see.

Time to see what Mavropanos can do. His time has come.

He’s been held up by some fans (unfairly and unwarranted) as some sort of defensive saviour for us.

But paired with someone like Kos would seem like the perfect fit coming back into the starting 11.

catbiscuits
Reply to  Maxin In The Shade

to be fair, I don’t think I’ve seen any fans hold him up as a defensive saviour. All I’ve seen is a lot of people warning us not to do do.

Maxin In The Shade
Reply to  catbiscuits

Not defensive saviour. But someone who
Is likely to be a mainstay based on 1-2 games from last season.

Either way, I’d like to see him be given a run of games.

Not to do do sounds a bit Paul McCartney

nice to see mhki back, everything’s been a bit touch and go w/ him, but let’s hope we can see the mhki of old (dortmund days)

I appreciate the effort on your part to use the correct spelling of his name in the abbreviate “Mhki”, but you’ve transposed the H and K and it also just doesn’t look right. Can we settle on Mickey, or Mick?

He was our outstanding players until he got injured.

Good to have more bodies available. Interested to see a bit more of Mavropanos over the next few weeks. I’m not bothered about Sunday, we know where we stand with this squad and that’s without all the injuries. If we can get back into the Champions League by hook or by crook I’ll consider this a really successful first season for Emery. It’s been tough to stick to this at times, but when we appointed him I thought to myself I’d let this season be a free hit while he finds his feet, and we’ll see how he does in… Read more »

hard to do that when he keeps picking bad lineups and playing that waste of a player iwobi.

Shame on you…and you know why!

I’m an ardent Emery fan. I trust and believe in him and yet even I have days where I worry about whether he understands that Arsenal have to get their swagger back. Still it’s very early days and the injuries have been devastating. I’m actually looking forward to summer. I’m pretty sure it will be a revolving door at Arsenal with plenty of deadwood being disposed of.

Plenty of deadwood disposed of, Amen to that.

Mavropanos should be in starting XI from next match onwards and Mkhi should be started or benched according to the matches.

Top 4 or Europa league whatever it may be, we should be in champions league for next season or else another season wasted.

Apparently Mavropanos has been left out of our Europa squad.
Hope to see him against Huddersfield… a goal last night will surely have boosted his confidence! Huddersfield won’t be easy (no away game is for us!) COYG

Such a shame that game was postponed but I guess if the players can’t see each other then there is no other choice. I’m hopeful that Mav will get some playing time in the PL. The fact that Emery brought him on against City suggests he is thinking of playing him in the PL.

I think we’ll see that we’ve missed Mkhi a bit more than expected. From what we saw from the cameo against City, Suarez isn’t a right winger. Spent most of the time drifting into the middle.

That leaves a Mkhi as pretty much our only player that can passably play the right side of midfield and attack.

I did like the look of Mav in pre season and he’s been unlucky with injuries but I’m sure he has a long way to go to be ahead of Koz and Sok. This maybe his chance to get a game or two under his belt but I can see Mustafi coming back as soon as he is fit despite not being good enough to play for Arsenal IMO. Sok’s injury was a massive blow to us at this time of the season. As for Mhki? So far he’s right there with Mustafi in the liability section yet to show… Read more »

Mavrapanos and holding is the future. Please play him every game ahead of mistuphi and his mistakes

Can we just play our best players in the formation that bring out the best in them.
Its not rocket science dear coach. And if playing both of Auba and Lacca is costing us fluidity in the midfield, you should know what to do.
I really am tired of insipid displays. Get your acts together.
Thank you

Dennis looked a bit intimidated (not surprising given opponents) in his first showing.

Hope to see more of him and have him express himself with a bit more confidence.