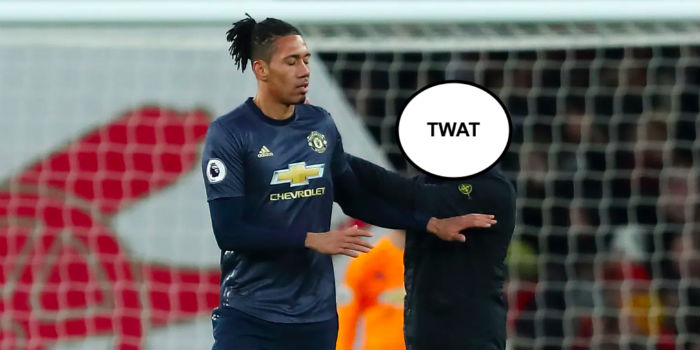 Arsenal have released a statement condemning the behaviour of a supporter who celebrated Pierre-Emerick Aubameyang’s goal against Manchester United by confronting Chris Smalling on the field of play.

The idiot, who also tried to court the attention of our players as we secured a 2-0 win, was quickly hauled off by stewards who seemed to enjoy ramming him into the pitchside hoardings before carting him off to a police station.

“We utterly condemn the behaviour of the individual who ran on to the pitch and approached Chris Smalling during today’s match,” reads a statement from an Arsenal club official.

“We would like to apologise to Chris and Manchester United, and are pleased that the individual was apprehended and arrested. We will be working closely with the Metropolitan Police in their investigation.

“The individual will also be banned from Arsenal matches home and away. Our matchday staff receive ongoing training on managing incidents such as this.”

The incident, which came just hours after a Birmingham supporter had punched Aston Villa’s Jack Grealish at St Andrew’s, was also touched on in Unai Emery’s post-game press conference.

“I don’t want that, but it’s not in my control,” said the Spaniard.

A quick word for the invader…cheers for besmirching our reputation, numbnuts. Here’s hoping you’re forced to watch Arsenal games at home for the rest of your life…with Stuart Robson as co-commentator for every single one of them.

Koscielny: We need the Emirates to be rocking

Leno: I’m in a good moment

The idiots calling for Arsenal to be heavily punished make me laugh. The club can’t control some lunatic jumping on to the pitch. Same for the Birmingham Villa derby. The Arsenal fan should be banned from football games. Same goes for the Birmingham fan and also a prison sentence for assault

Exactly, some pundits like Phil Neville and Alan Shearer saying point deductions for clubs have not thought this through. It will create quite a sinister scenario where some pretend fan can be bribed/manipulated into going into the pitch to help a crook/bookie/dodgy owner gain an advantage.

Second point is when people say the lunatics should be banned for jumping on the pitcc, that’s all well and good but not easily enforcable. Anyone can buy a ticket from ticket touts outside the tube station and no one checks ID’s when you enter the stadium!

It has to be a ban regardless, and a big fine, a fine that means you really can’t do it unless you want a divorce lol.

thinking about it you will prob have hundreds pitch invading every week if that’s the case!

food for thought
Reply to  sambo

bans and fines are too lenient. they should be forced to attend every tottenham home game. that would be a real torture. even to their own fans (i’m pretty sure they secretly feel this way, even if they wont admit it.).
this will be difficult to execute though, because noone really knows where the stadium really is, since all they see is a pile of shit under construction … forever..

Stop him seeing Arsenal again with a community service order – to clean the giant toilet at Shiteheart lane every match day.

Ratface II and the talking-nutsack have never really thought anything through before, so why expect them to start now.

Don’t wish him Stuart Robson! All the other viewers will suffer because of that jerk

If Stuart robsons in his living room it’ll be alright

I believe Stuart Robson’s commentary to be considered ‘cruel and unusual punishment’ under the European convention on human rights.

The supporter?
Or Stuart Robson?

Ah Stuart Robson’s not that bad!

Not until we sacked him for being a knob, no.

I’d like to know what the football authorities expect clubs to do to prevent pitch incursions beside some building fences (which creates new dangers)
Our games are well stewarded and policed and yesterday’s twat was detained quickly.

Cretinous moron. If we get a points deduction for this I want this man flayed alive in the centre circle.

No chance of points deduction. If so then I’m going to wear a Tottenham top & run on to their home pitch …..oh wait!!

you cant do that because your skin will itch from irritation. cos that’s what their jerseys do to the skin.

There should be netting around all grounds, it stops idiots running onto the pitch, people throwing stuff (see Rennes game) & is completely safe as there are zips that can easily be opened by stewards incase of emergency.

I honestly don’t think there needs to be any action taken. How often does this happen- particularly to the degree seen with Grealish? If we start trying to plan for every possible shit thing that could happen we’ll have teams playing in front of empty stadia. Ban our guy, chuck the Birmingham twat in prison for 6 months and move on.

that’s true. a prison sentence is warranted because a fine wouldnt be a deterrent, since our fans are so loaded anyway given how we can afford the exorbitant ticket prices!

A life time ban and hit him in the pocket with a massive fine. No one wants fences or anything else up round pitch side. These dumass pea brains should also loose some of there free time with a stint of local community based work at the weekends.

The guy really is a dumbass. Any other weekend and he’d have gotten away with a “slap on the wrists” fine – this weekend will see him get serious ban, fine and possibly custodial sentence. The Brummie bluenose was a real chicken-shit attack and got what he deserved, a Grealish winner and jail.

If you think of all the people that are at an Arsenal home game, fans, staff, broadcasters etc it’s a lot of people (70k+?) then times that by how many games we play at home, then times that by ten (the number of years at this stadium) and you get a lot of people. In all that time I can only remember five people running on the pitch. To have that few I would say is a minor miracle. And to think in that time we have had a divided fan base and a sometimes hostile match day crowd. Some… Read more »

I don’t see what all the fuss is about. why not give each club an allotment of pitch invasions each season?

Say, five pitch invasions each season which you get put into a lottery for after you sign up to a certain membership package.

I guess he had too much to drink. A crazy thing he had to do.

VAR will solve the problem
Reply to  Teryima Adi

May be he thought Lingard was on the pitch? My alter ego can relate to that.

As a further punishment let them listen to Michael Owen and Alan Smith commentating. I cannot stand there boring voices

Oh god, we’ll be back to fencing fans in and football id cards on the agenda again. This guy has enabled the media to move the focus away from Manure’s defeat and our performance – twat.

Let’s not overreact. If we abolish football the problem can be resolved.

and this is why i’m surprised nobody’s tried to lobby for professional archers to be stationed in the four corners of the stadium armed with huge golden arches and arrows with one of those sticky rubber heads soaked in deadly swine shit all ready to aim directly at the invader’s mouth.
it’ll have multiple purposes, for protecting the players, for shooting at away players when we lose, or to take down mike dean for whatever reason.

Albert442Diamond
Reply to  food for thought

“with Stuart Robson as co-commentator for every single one of them” LOL certainly no one ever deserve such a punishment… unless they support Sp*ds.