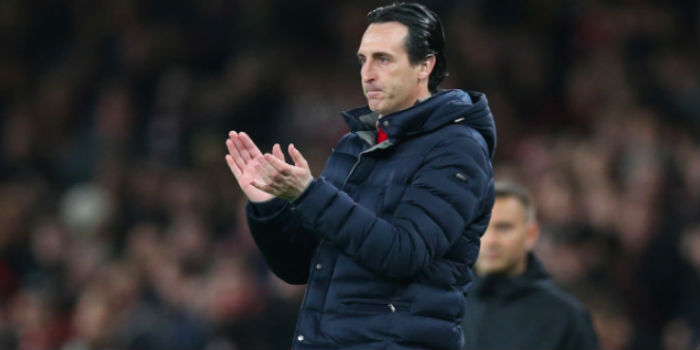 Unai Emery was pleased with his players’ competitiveness as Arsenal beat Rennes 3-0 at the Emirates to secure safe passage to the Europa League quarter-finals with a 4-3 win on aggregate.

After last week’s defeat in France, the Gunners knew they’d have to score at least two goals on the night to progress and made the perfect start when Pierre-Emerick Aubameyang and Ainsley Maitland-Niles both tucked home from close range inside 15 minutes.

With 18 minutes remaining Sead Kolasinac set-up Aubameyang for his second, he celebrated with a Black Panther mask and then squandered to great chances for his hat-trick, leaving the defence to dig in doggedly for a clean sheet that ensured the game didn’t go to extra-time.

While Emery welcomed the win, he made clear that there remains room for improvement.

“It was a good evening,” he told BT Sport. “3-0 is good for us. We had chances to score the fourth goal and be more calm.

“I’m very proud of the supporters and players. We worked very well this week. We can be happy.

“We were very competitive over 90 minutes but can do better. We could have had more control of the ball. It’s easy to say here instead of on the pitch.”

Asked whether Arsenal are one of the favourites to win the competition, Emery replied told his post-game press conference, “These two matches gave us a very difficult way. This competition, today for example, Inter Milan is out, Sevilla is out. A big surprise.

“The last eight teams are very important teams and it is going to be very difficult. But we are going to think the same ideas before this match, before Sunday’s match against Manchester United.

“The next match is the most important match for us and the next competition is the same.

“After 15 days, we are going to play against Newcastle here in the Premier League and then other matches in the Europa League. We are going to prepare for each match as if it’s the most important.”

VAR will solve the problem
Reply to  Jamie

Let’s win the cup and finish 3rd ! Chelsea finishes fourth. Ideal scenario would be Sp*ds and Manures ending up outside the top 4. Then with Chelsea’s transfer ban and losing Hazard to RM…they will be significantly weaker and end up in midtable. With no CL, sp*ds will lose their hypocrite manager to to PSG and won’t have enough money for transfers and end up in midtable (just where they belong) trying to pay for that shiny toilet bowl.
top 6 will turn into top 4 again. (Yes…im a very petty man!)

Vince
Reply to  VAR will solve the problem

Give me that German sausage

Thats the last team we want to face. Tacticaly very astute and a front 3 that really works very well and clinical against our defensive system that seems to give everyone chances to score. They are very good on the counter and cede possession to the opposition, they are also very good in a low block if they score. They are still a hard running team like last season with even more cynical play than Rennais. Quality-wise we are a Champions League team, but tactically, we play like a Europa League team and they are capable of beating those. That… Read more »

We are very much a Europa League team. The right tactic are the only way we could match up with PL top 6 or any other European giant.

God I would love to play Santi

Semis v Villarreal and final v Chelskie be the bomb. Beating chavski and Cech lifting the cup be ideal

There’s a very good chance you may get your wish.

On a related note, loved how our Handsome French Bloke took the match-ball home with him. Shame that he has to sport that horrible yellow shirt. Here’s to hoping that Unai brings him back when he’s available for free at the end of the season!

I just assume that Oli will show up at Colney after the summer as if he’s been away on a Long holiday. Come in, change into the gear and blend in…

Never happen while Laca and Black Panther are still around.

I can see that in terms of numbers it is almost impossible and it blocks the paths of so many talented young strikers like Eddie, Jon Jules and Balogun, but Giroud is such an Arsenal player and identifies assuch when I see him play. I still don’t believe he was good enough for Ozil and Sanchez, but he always worked hard and forced Arsene to play him upfront. Arsene always tried to play someone else upfront, but as the season progressed, Giroud earned his position back through shere will. Podolski, Gervinho, Walcott, Welbeck, Sanchez and Lacazette, all started our previous… Read more »

He is a but like Ramsey. Good players who have such good followings and have carried themselves as professionals and Arsenal through and through.

They both hold a special place in some people’s hearts for their exploits during the FA Cup wins, even though Ramsey has only played well in the finals.

I am glad our Arsenal is in a good moment. Props to Emery and the players for turning it around after the first leg showing at Rennes.

Still taking it one game at a time for now, but I’m sincerely daring to hope for Champions League football next year (hopefully with a Europa League win, but a top 4 Premier League finish if not). COYG!

Huge credit should go to Emery. The impact of the substitutes were immediate in this game. It came at a time to when Rennes were getting bodies forward and were contesting hard in the middle of the park. on come mikhi and iwobi to bring some ball carrying assurance to the game that provided the Panther with his goal. That seemed to take the sting out of Rennes after that (bar the button pushing swivel hip routine of Ben10 towards the end) Emery’s pragmatism and tactical nous has worked wonders at points this season, and we should feel confident that… Read more »

“We could have had more control of the ball. It’s easy to say here instead of on the pitch.”

I fear this means bus-parking, which Arsenal is no good at, and which all fans resent. Arsenal should have continued attacking at high speed after 2-0, won 6-0 and in the process had far fewer free kicks, cards and injuries.

“We could have had more control of the ball. [but] It’s easy to say [that] here [now] instead of [when we were] on the pitch.”

That’s what I think he meant…