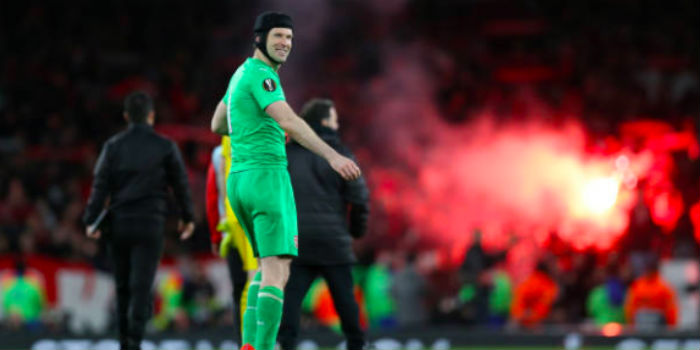 Petr Cech says he’s dreaming of one last piece of silverware before he retires as Arsenal kept their European ambitions alive with a swashbuckling comeback against Rennes.

The 36-year-old kept his fourth European clean sheet of the season as the Gunners beat his former club 3-0 at the Emirates to progress 4-3 on aggregate; a result that secures their place in Friday’s quarter-final draw.

Assuming Unai Emery retains his current keeper pecking order for the rest of the season, Cech may have, at most, five games left as a professional, the last of which could be the Europa League final in Baku.

Speaking after this evening’s victory, Cech told Arsenal.com: “My dream goes on – my dream is to retire with a trophy in my hands.

“Today we gave ourselves the chance for me to finish like this. There’s a long way to go but with performances like that, we can compete.

“Sometimes you give a big performance, you do everything right, you are unlucky and you can go out.

“When you perform at the level we did today, you know that you have a chance to go through.

“As soon as the game started, you could see the way the team played and fought together. You know that you are giving yourselves a chance.

“We scored goals at important times and kept a clean sheet, which is what you need in a game like that.”

If the Gunners are to go all the way, they could face another of Cech’s former clubs, Chelsea, along the way. Olivier Giroud scored a hat-trick as the Blues beat Dinamo Kiev 8-0 on aggregate to secure their place in the quarter-finals.

The other teams in the pot tomorrow are Napoli, Slavia Prague, Villarreal, Valencia Frankfurt and Benfica.

Wouldn’t be afraid of any team but a final v Chelsea and us winning would be something special.

Apparently the new thing this year is that they will draw all remaining stages tomorrow instead of waiting until end of quarters to draw the semi finals. Not sure I like having a set bracket so you know who your opponent will be.

They’ve drawn quarters and semis together for quite some time now, in bth Europa League and Champions League. The only new thing this year is now they’re also gong to draw which team is “home” for the final.

From the Uefa website it says it’s new this year. It’s always been a fresh draw each round

Yeah we definitely didnt know we had Atletico when we played Milan last year. I quite like the idea of knowing both though!

It definitely used to be together in the past, maybe not for a few years though. I’m sure Spurs fans would remember.

I am gonna miss him a lot. He is such a big character. It looks impossible at the moment but it would be a big boost if he can stay with the team as a coach. We need people like him at the club.

Has more of a Chelsea DNA than Arsenal, I believe. A lovable personality, though.

While I hope we don’t face our domestic rival in the next round, I hope ManU would in the CL.

Someone posted earlier about how the players are starting to sound like Emery and I’m noticing it as well. “Big performance” etc. lol. I’m liking it.

Could this be directed at Emery a little bit? Just to make it that little bit harder to drop him when he makes an emotional statement like that. Hope we can make the final and Cech starts and gets his wish.

I’d say emery would start him in the final, though that feels like a wenger hangover. We should play the player on the best form at the time for the best result

Cech Mate, game over– the trophy is yours, Cech.