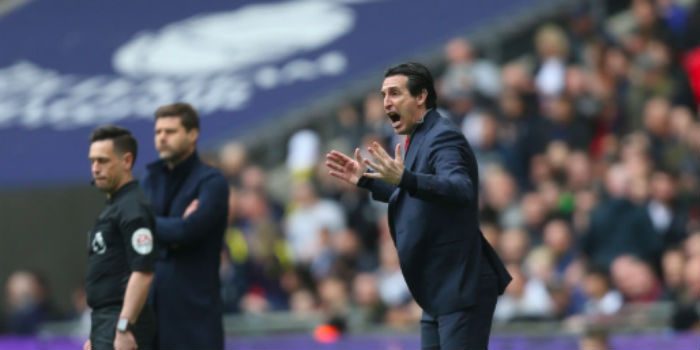 The Gunners had to settle for a point on an afternoon that saw Harry Kane’s spot-kick cancel out Aaron Ramsey’s strike before Pierre-Emerick Aubameyang missed a penalty in the 90th minute.

The sore point for the Spaniard was the awarding of Sp*rs’ penalty which came after a clearly offside Kane was pushed over by Mustafi. Referee Anthony Taylor went on to hand Lucas Torreira a straight red card deep into five minutes of stoppage time.

Asked by BT Sport whether video assistant referees, who will be available in the Premier League next season, might have altered the game’s big calls, Emery said, “One month ago, I said to everybody my opinion about VAR, it’s coming for the referees.

“It’s very difficult for the referees. You can analyse with the TV, it’s very easy, but the referees can’t use that now.

“When it’s arriving, VAR, it will help them. Maybe today, the match would be different. I understand it’s difficult for the referees.

While the result may not have gone his side’s way, Emery was pleased with the way his side responded to his tactics and he thinks they can go from strength to strength.

“Yes [it was a cruel end to the game], you prepare one match thinking the best performance for here away, in a derby, where it’s very difficult. It can happen, different situations in the 90 minutes.

“After you can do one balance. And the balance, we are finding our way. Today, being competitive, adapting our performance against them in two directions, one offensively, the other defensively. It demands from us a lot of transitions.

“For us, it’s good, not the result, because we could have won, but because we can feel stronger after that match in our mentality for the next matches.”

Leno continues to grow and today you can see what he was like in tandem with a good defensive performance. Only a dodgy penalty could beat him!

That double save was the best EPL save of the season!

Spuds were bloody lucky, Aubameyang has to hit that bloody penalty though. Unlucky, but I don’t think the red was as good as Emery says, he was tricked by too many Spuds diving. How did Rose stay in the field when he should have had a yellow for diving right at the beginning as well.

Studs to the belly of Leno, he was lucky to get away with an yellow

Gutted not to get all 3 points.. Referee’s are a disgrace. Anyways we move on and get a win against United. #COYG #UaniEmery’sRedArmy

Unai is still struggling a little with his English; when he says “I like this man who is referee today”, he actually meant “Anthony Tailor is a clueless fuckwit…”

He was so bloody inconsistent

Hey, if it buys us a couple of friendly decisions next game…

Perhaps he already mastered the art of sarcasm

“A disgrace to his federation..”

VAR will not clean up everything, but it will certainly help.

Is VAR going to help with disciplinary decisions or only goals? Something tells me it will be selectively used in the former case, so as not to ‘undermine the authority’ of their bent/incompetent refs.

The sp*rs defender who cleared Aubameyangs potential tap in right after the pen (think it was alderweireld) was about 5 yards in the box when Auba struck his pen, allowing him to get back and make the clearance. Another one missed by the officials today who literally got every major decision wrong. Just watched Southampton get robbed of two pens at Old Trafford too. I swear these poor decisions seem to fuck us more than others. Bring on VAR I say!

Maybe the ref was making amends to the cluster f*ck of the offside pen but Arsenal pen was valid even though it was soft. The defender was behind him and didn’t touch the ball at all. He threw Auba off balance you can’t dispute that. The only questionable thing is that Auba couldn’t done much with the ball but that doesn’t count regarding penalty.

Refs asked for help frequently in the World Cup. Shows you how often they are in doubt.

Not a single Epl ref at the world cup mate. And you can see why

If you look at the freeze frame, linesman is looking straight down the line at the Spurs free kick, so you wonder how it could not give it. But look how he is standing! The angle he is standing there is no way he can tell when the free kick is taken. The first basic of being a good linesman is to watch the player kicking the ball.

Could the forces at play be more biased or lopsided??
1) FA let’s Kane on the pitch
2) Offside against Kane from a set piece(!) not awarded
3) I bet you they won’t overturn that red card against Torreira
One can only hope VAR will save these refs from their own incompetence, but then again chances are they won’t be immune from bottling it in the studio either

Would be nice if the FA could release a clear outline of the rules, and then follow those rules for an entire campaign. This means consistent application of said rules to all teams, and all players, regardless of their nationality.
I have high hopes that VAR will be used to hold referees accountable for their work standards- but PL referee seems to be the only job outside of the banking/finance sector in which people are not held accountable for their poor performances (or outright cheating).
Looking forward to the PL making an absolute shambles of VAR implementation, though.

“Result would have been different without [Mustafi].

I called it. Starting Ozil and Auba would have had them be more effective. Anyway apart from the complete BULLSHIT with their goal I thought we played well and deserved a win. Ramsey made a good send off for himself. Mkhi was very good as well. Shame we couldn’t take all 3 points

I find our attack is disjointed when Ramsey plays. Ozil links up the play really well and this is what we miss when he doesn’t play.

It would have been nice to see if Ramsey and LT would have played well together in the CM together.

This game felt like a defeat. We were 1-0 up, we should have gone with a more defensive approach and taken Ramsey off for a defender or a defensive midfielder. Ozil is too soft of a player to bring on to protect a 1-0 lead. The goal we conceded was clearly offside, to add insult to injury it came from a clumsy foul by mustafi. Then to rub salt on our wounds Abu takes a poor and weak penalty, which he missed, and LT will miss the Man Utd game. 1-1 away to spurs is not the worst result in… Read more »

The foul was made by Papa… let Mustafi be please

Still fourth!!! Pogba just missed a penalty in extra time…. many thanks 🙂
Let’s beat them hard next week rend after fond thé same to Rennes and that will be a great week
COYG!!

*…next week after we do the same to Rennes and that will be a gret week….

When I saw the line up I had my doubts… so to take the lead & not do too badly makes this even worse to take….
Happy for Ramsey (He will be missed in the NLD) really pis*ed off with Auba…. I know there was a lot of pressure on him, but come on!!! It feels like a loss to me. They could afford to drop the points whereas we couldn’t. I’m gutted & to top it all I saw a tweet saying The Gabonese sonic the hedgehog just cost Arsenal 3 points!!! ???

I can’t help but think if only Laca had stayed on… the if onlys………..

Kane was offside. However, Mustafi ( despite probably being a good professional and giving 100 per cent) just is not good enough. He consistetly gets in poor positions and then panics. His decision making is awful.

Yes, Vertongen encroached etc etc but someone paid more in a week than I do over years should not be so casual with his penalty taking – sorry but Auba must be more professional and consistent. It is these big moments that set great players apart from good ones. The Officials let us down but we let ourselves down and still should have won!

What is also true is the result would have been different without that stupid f**king mutt, Mustafi. I dream of the day when we flush this turd out of the club. Why Emery put him at RB I’ll never know.

Really poor decision by Ref and linesman. Half or more of the Spurs team offside. BUT also a double edge sword. The penalty against them was a gift to us. The other thing is surprise Unai hauled off Laca and Ramsey so early. And he did not seem to relish switching to a back 3 maybe when we conceded (or could not having already made changes) bc we would have been able to unleash Kolasinac (with Iwobi) otherwise. The Bosnian has been in superb form of late and surely an option if for limited period of the match when we… Read more »

What an excellent manager……. slowly overtaking others from nearby dynasties

A good team capitalizes on any least chance even on bad days and that makes City the City we see today. As for PL referees, I can now understand why they’re denied opportunity to officiate World cup matches. Controversial lots!!.
Can’t wait for VAR.