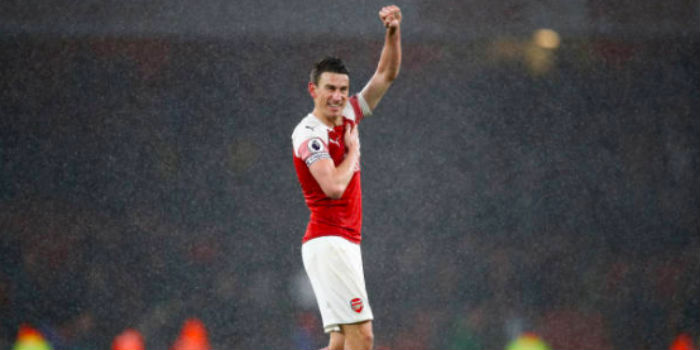 Laurent Koscielny has called on Arsenal fans to produce a ‘rocking’ atmosphere as the Gunners look to overturn a 3-1 deficit against Rennes.

Emirates Stadium has been fortress-like this season with only Manchester City – in the Premier League – and Sp*rs and Manchester United – in domestic cups – inflicting defeats on us. Liverpool and Wolves are the only other sides to have avoided defeat.

It bodes well ahead of a big night in which the Gunners have to score at least twice. Having beaten Ole Gunnar Solksjaer’s side on Sunday with a mature performance, captain Koscielny is hoping for more of the same.

“It is a big European night at the Emirates against Rennes and we need the place to be rocking,” the Frenchman told Arsenal’s official matchday programme.

“Our defeat in the first leg in France was disappointing after playing for more than 45 minutes with 10 men. The third goal we conceded, on a counter attack, hurt. However, we are still very much in this tie.

“Like in the United game, our team spirit will be one of the keys too. We need to have that warrior mentality, play for each other and believe in one another.”

On Sunday’s win against the Red Devils – the first domestic defeat suffered by the Old Trafford outfit since they sacked Jose Mourinho – Koscielny added, “I thought it was such a clinical and professional performance from the team.

“Tactically, the gameplan set up by the manager was spot on. We were balanced, organised. We defended well and were efficient in attack.

“What I liked the most about Sunday is what a wonderful team spirit we showed. We all fought for each other, all played for each other. We won the game mentally, in our heads. We were warriors. This is the mentality that will take us to the top.”

“What I liked the most about Sunday is what a wonderful team spirit we showed. We all fought for each other, all played for each other. We won the game mentally, in our heads. We were warriors. This is the mentality that will take us to the top.”

Why can’t this be achieved or at least attempted in every game?

Good point, but easier said than done. To raise your game, same level for each and every game, you’d need same level of motivation, same fan passion and maybe same history between the clubs. Crikey! Even the weather affects moods, not to speak of change in personnel for injuries, suspensions and tactics.

However, I feel we can achieve that level in most of the games, if the manager keeps everyone’s feet on the ground and eyes on the ball always; just like Pep manages to do with City most games.

I don’t get to go to many games, but managed to get a ticket for this one. Looking forward to contributing to the ‘rocking’ atmosphere that Kos is asking for!

Right, its up to you then. Get that crowd singing loud enough to drown out any noise the Rennes fans try to make.

Let’s hope that the Warriors come out and play…and win the game and safely make it through to the next round.

‘“Tactically, the gameplan set up by the manager was spot on. We were balanced, organised. We defended well and were efficient in attack.”‘

I love it when the Captain praises the coach’s gameplan. Buy-in is very important for a new manager, and the performances of late are showing that the squad has indeed began to buy-in and understand the coach’s vision. Bodes well.

Red card! Get out!

I will be ‘rocking’ you on from the sofa a million miles away Kos. COYG!!! Let’s do this! ?

Laca Auba Rambo and Ozil from the start please!!!

We need also need to finish this game with 11. If we play with the commitment we showed on Sunday, we should be able to win and head to the next round.