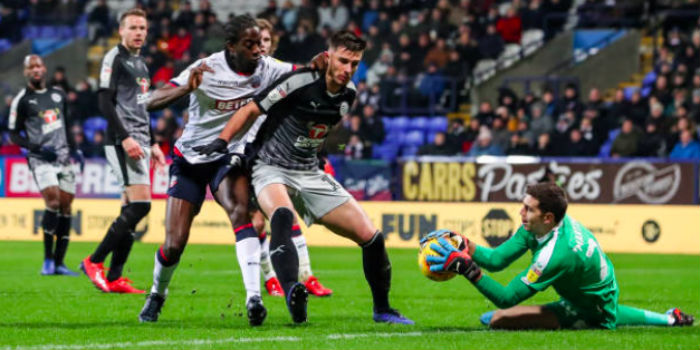 Emiliano Martinez says he feels vindicated by his decision to join Championship side Reading on loan in January.

The Argentine has played nine times for the Royals, producing a couple of man of the match performances as they fend off the threat of relegation.

The 26-year-old only featured once for the Gunners in the first half of the season – a 1-0 win against Qarabag in the Europa League – but revealed at the time of his move to the Madejski that the club wants him as back-up to Bernd Leno next season when Petr Cech retires and David Ospina leaves.

In an extensive interview, first published in the Reading programme, Martinez said: “When I stayed at Arsenal, they promised me games but in five months, I’ve been training well, I had the whole of pre-season – had amazing games in pre-season, so I thought I would have a chance. But when you have 20 games and you’re only involved in one, I had to go out and get some games.

“I had some offers from abroad but Reading came along. I had a new-born baby, I know the league, I know the club, obviously Sal Bibbo was my coach at Arsenal [previously Reading] and said this was a great club for me – that likes to play from the back, which suits my style.

“Now, my decision is paying off. Sometimes in football you can make wrong decisions, I feel like Reading suits me but it’s not over yet, we’ve still got 10 games left and we need to get more wins – but we’re on the right path.

“When I came here, what surprised me is how good the players are. It was a big challenge for me, going to a team that’s in the relegation zone in the Championship you’d think the squad might be broken, maybe the players fight in the dressing room, but you don’t want to get into that and not be comfortable in your work.

“But it surprised me, how the players are. It’s a really friendly club, everyone’s smiling, and I wondered how this club could have players this good and be in the relegation zone. We’d only lost one in seven games, then at Sheffield United we conceded after 40 seconds, so it would have been a different game if that ball wasn’t going in. We’re doing good things.”

Martinez, who has three years left on his contract, has previously undertaken loan spells at Oxford United, Sheffield Wednesday, Rotherham, Wolves and Getafe.

I wonder what if there’s an option to buy in the deal? 26 feels too old for a potential keeper when there are 18/19 year olds with more games

If we get CL football next season I can see Emi coming back but if we don’t then we might sell him, providing Reading have the money.

SharpasFc… so is Reading your 2nd team? Were you at the league cup (7-5) game?

Vince, I was curious ?….. I went to that game, but had to sit with the Reading fans ?

My wife’s family are Reading supporters (we live in Newbury) so been following his loan pretty closely, went to the Leeds game where Reading lost 3-0 at home. They were all over the shop defensively and while he probably could’ve done better with one of the goals he kept the score from getting embarrassing. It’s clear he is enjoying a run of games and he definitely has talent. I’m personally happy to have him as our number 2 next year, especially as he counts as homegrown and will be a cheaper option than going out and signing someone new to… Read more »

I’m talking about a prospect, not an established keeper. I’m not saying he’s too old to be a keeper but too old to be a potential prospect. That’s 8/9 years he hasn’t been playing regularly

I’m sure that there are lots of prospects that age, none of whom will play in the PL for several years and none with ‘more games’ (especially given his loan spells).

The youngest keeper in the PL is 24. So Martinez is still quite young for a keeper. I’m not sure he will make it but his age isn’t a problem at all.

Emi is 26. And 26 is like 20 for a goalkeeper. goalkeepers usually reach their peak a bit later and have longer carreer than any other position

Poll up there until tomorrow so get in soon.

And no Sp*rs players in contention, a scandal…

Thierry is the best, even without arsenal bias. No question.

Bergkamp deserved more than an honorable mention. And Pires nowhere to be found is almost criminal

And just realized that no kolo toure there too. An invincible that didnt even get an honorable mention….simply wow

Good luck to him, he may be in the running for a return to The Emirates particularly as money is so tight and we’ve other key positions to strengthen.

I’ve not seen enough of him to judge how good he is. But what I will say is he is very, very confident. Even if he makes a mistake, he sticks to his guns and tries to be decisive, which is rare.

Now under the previous goalkeeping coaches I’d have thought he should move on. Now we have actual grown ups doing the coaching I think he could certainly be a viable back up. He’s shown he can make good saves and deal with crosses, just needs to prove how consistent he is.

It is time for Arsenal to take responsibility of its home grown players. We need to atleast give our home grown players the chance to become second choice in more positions instead of buying more backups. We have seen the likes of joel campbell, gnarby, akpom who were never even given game time to shine and pass the full contract playing on loan. If this goes on then a club like arsenal will not attract best youth players. We should already have a plan in contention for our loan players nketiah, nelson,smith rowe, chambers, beilik, martinez for the next season.… Read more »

The ‘point’ is that the club need the small sales to help tick things over.
The problem is from top to bottom we undersell our assets, unless we’re talking plastic pint and pizza prices, they certainly know how to price that!

Changing the subject totally – get onto bbc/football and get voting for Thierry Henry as PL best overseas player ever!

(Sorry, this is latest message board I could use)

How is there an advertisement for Sp*rs tickets on a Arsenal fans forum ? for shame…

I was thinking this also; however, if they are paying per ad (impression) then they are wasting their money… and I am all for that. If they are paying per click @arseblog, you may want to stop them, as I would like to think no one is clicking through, thus no revenue for Arseblog, just wasted ad space.

Or … EVERYONE could click through but then not buy anything, thereby generating revenue for Arseblog at Spurms’ expense.