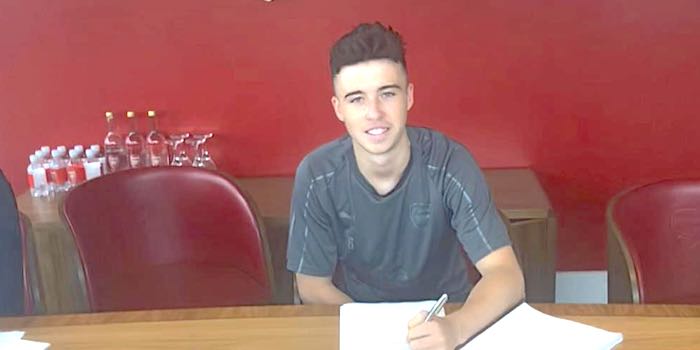 Some youngsters can find it difficult to adapt when joining a new club.

Joel Lopez, for instance, has taken some time to perform at his best since joining Arsenal from Barcelona.

Sam Greenwood, however, hit the ground running following his switch from Sunderland last summer and he hasn’t looked back since.

The forward arrived at Arsenal having already amassed a considerable amount of experience of U18 football while he was a schoolboy.

Greenwood has proceeded to score eight goals in 16 appearances for the U18s so far this season, while he has also provided three assists.

In addition, the 17-year-old, who is expected to sign professional terms before the start of next season, has also demonstrated his versatility, impressing whether deployed as a centre forward, a playmaker or on either wing.

It may not be the most popular comparison with Arsenal supporters, but there are some similarities between Greenwood and Robin van Persie in terms of playing style, with the youngster possessing excellent technique.

Owing to the fact that he has several players ahead of him in the pecking order, Greenwood has yet to make the breakthrough into Arsenal’s U23 side, but that will surely come in due course as he continues to develop.

Greenwood has also frequently impressed for England at youth level and Arsenal’s decision to sign him certainly seems to have been an inspired one as he has vast potential.

It is, of course, far too early to tell whether Greenwood will eventually be able to make an impact in the Arsenal first-team but his first season at the club could hardly have gone much better.

Greenwood will hope to conclude the campaign by helping Arsenal U18s to win the title, which would set him up nicely for next season, when he will be aiming to reach even greater heights.

You mention Lopez, has he started to play a bit now?

JeorgeBird
Reply to  David the Gooner

If he is like van p in playing style that’s great, just if he had his attitude we’d be worried about the comparison

Last chance today so get in soon.

VAR will solve the problem
Reply to  martin

That’s why I didnt vote at all…fuck these idiots…fucking Jaap Staam?… Mo Salah? No doubt they are good players…but they didnt even play for two seasons and we are supposed consider them as legends. I say stay away from clicking that link.