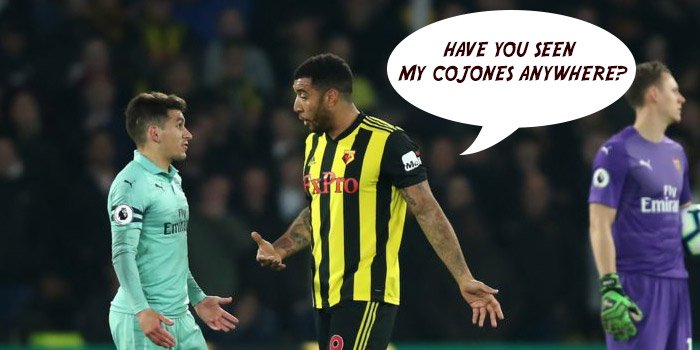 With Watford down to ten men and Arsenal struggling to impose themselves properly on the game, it felt inevitable that Unai Emery would make a half-time change during last night’s 1-0 win at Vicarage Road.

The substitution of Lucas Torreira probably wasn’t the one most people were expecting though, as the Uruguayan made way for Mesut Ozil at the break.

Afterwards, the Arsenal boss explained his thinking, suggesting the crowd’s disapproval of the Arsenal midfielder played a part, as did a minor injury.

“First I decided to do the change of Lucas Torreira because after the red card, the atmosphere is against him,” said Emery.

“Also the doctor said to me in the first half that he has a little pain for Thursday and I decided okay, it’s the moment.

“I think it’s small and he can be ready for Thursday physically.”

Emery was on the receiving end of some words from Troy Deeney, who was sent off in the 11th minute for a forearm to the face of Torreira, but the Spaniard said he had no idea what the chunky Watford captain was on about.

“I don’t know,” he said when asked what Deeney had shouted.

Rumours that Emery said, “¿Dónde están tus cojones ahora?” could not be verified.

Deeney can get in the fucking sea

I find the lack of subjuntivo disturbing

That picture made my whole day. Brilliant

Deeney, this is what happens when you run your mouth. Let your feet do the talking next time, and not your forearms. Imbecile.

Especially when our away form is so bad, I think we’d be remiss to minimize the psychological element of this. If we’re already struggling in a hostile atmosphere and have a good backup option, it makes sense to remove a player that will cause the home fans to crank the hostile-ometer to 11 every time he touches the ball.

Make sure to patent the “hostile-ometer” I’d hate for anyone else to make money from it!

I actually said that I hoped Emery would take Torreira off. I thought he was constantly being “semi-fouled” (I mean marginal fouls that referees will only sometimes call) and wound up by the Watford players. Given the early red card, I thought the referee was reluctant to call anything against Watford, and extremely reluctant to produce a yellow card–I thought there a half-dozen that could have been shown, including a couple for persistent fouls.

It’s not just that, he was a target for ‘fair’ heavy challenges

Troy Deeney really is desperate to start some kind of rivalry with Arsenal from nowhere ? but if it results in red cards, saved penalties and the gunners resting their cojones on a top four spot I’ll take it every year ??

After the multiple heart attacks during the game, the 3 points feel and the position in the table feel sweet.

Deeney was my 2nd favourite person on the pitch yesterday. Joint first was the ref and the linesman for making one of rhe best decisions in their lives.

I especially love the bit where Deeney says in his interview “I need to watch what I say” before saying everything that’s in his head anyway and then consequently getting bitten in the arse by it time after time.

That c*nt is now homeless following the terrible fire in Paris.

Hopefully Deeney ends up where he belongs next year. In the championship with the other Orcs.

Interesting. However, if anyone thinks the crowd response at Watford was tough wait until we get to Napoli. They’re fanatics and our players will be in for a rough time off (and very probably) on the pitch at the SPS on Thursday. Cool heads will be needed by everyone.

No issue with Unai subbing off : 1) He looked to me like he was struggling with the game. He wasn’t particularly any more effective than anyone-else. In fact he lost the ball and fouled Thomas on edge of Penalty box leading to one of their better chances off the Capoue free kick subsequent to it. 2) We have to ‘protect’ some players for Napoli. Likely he will start with Granit only recently back from groin duty 50-50. 3) There was also a ‘tactical’ switch as Unai lumped on an added creative in Ozil. whether he added anything consequently is… Read more »

Under Wenger Arsenal bought players below 6ft in height.His thinking
that technical players can trimph in the epl was flawed as time and again
Arsenal were outmuscled by physically imposing player.
Nothing would shake would shake him from his conviction.Even heavy
against his immediate trivals was given short shrift.
Toerreira maybe an aggressive bulldog but would be nomatch for a
mastiff. Hopefully Emery wont repeat the fms errors of overlooking physique
in the English Physical League.