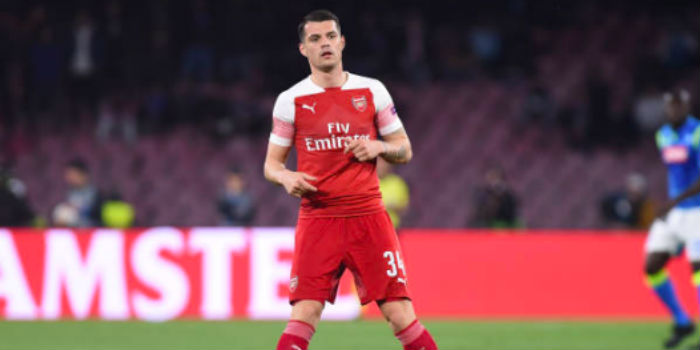 Granit Xhaka is an injury doubt for Sunday’s game with Crystal Palace having picked up a hip problem in the 1-0 win over Napoli.

When the Swiss was substituted midway through the second half last night it was assumed Unai Emery had made the decision to avoid the player picking up a booking that would have earned him a Europa League suspension.

While that may have formed part of his thinking, it looks as though a knock probably made up his mind. Xhaka has already missed four Premier League games in 2019 due to a groin problem.

Arsenal’s medical team have also confirmed that Aaron Ramsey sustained an injury to his left hamstring.

Unsurprisingly, they’ve ruled him out of Sunday’s game. He’ll be properly assessed in a few days with the hope being he only misses a couple of weeks rather than a couple of months. If it’s the latter, the fear is we’ve seen the last of him in an Arsenal shirt.

Elsewhere, Denis Suarez’s groin injury looks likely to keep him sidelined – there were rumours doing the rounds this week that he could even return to Barcelona early – while Rob Holding, Hector Bellerin and Danny Welbeck are continuing their rehab from long-term problems. In good news, the latter is already working with the ball again.

Sokratis will miss Palace’s visit to the Emirates as he is serving the second of a recent two-game ban for picking up 10 bookings this season. Unai Emery confirmed last night that he’ll definitely be rotating his players this weekend.

Ajax is good at wiping away scum

Let’s hope Ramsey can say goodbye when he scores the winning goal in Baku.

He does have that habit.

I’m hoping for the playtime for Mavros. Sure he looked rusty last time and he’s still raw, but I think too may where maybe jumping on his rawness rather than rustiness. Not as a direct comparison, but remember how awful Kos looked when he initially returned (so much so some here were calling for the end of his career) to being arguably our best player bar Ramsey since his return. Not saying Mavros will do that, but let’s not underestimate what being sidelined for almost a year (didn’t even have preseason) can do. Also with Xhaka and Ramsey out this… Read more »

Willock has looked very good in his limited first team minutes. Maybe it’s time for him to step up and show what he’s got.

Can you imagine Serie A’s reaction to his all action running? They’ll be like “what the hell is wrong with this guy he is always running I need a smoke break”

If Bellerin, Holding and Welbeck did not have season ending injuries, Arsenal would be firmly in the top 3 as we speak. That also goes to highlight the great job Emery has done with this team. If we get a left back, a winger, resign Welbeck (I just love his industry), get one cental defender in, and replace Ramsey, the EPL may be in for a huge surprise from the gunners next season. Nielson, EMS, Willock and Mavropanos are also ready for greater involvement with the first team. I think Elneny and Mhkitaryan should make way. I am undecided about… Read more »

A few key “ifs” there. Unfortunately, we’re in a “what is” world, not a “what if” one. I think Welbeck will be going and Elneny too. There will be others as we need to cut the wage bill substantially. Unlike many of his supporters on this site, I’ve actually seen Mustafi “live” in all his home appearances so I can comment on his “actual performance”. My formed opinion over all those games is that he’s never justified his (still) large transfer fee of £35 million. He just isn’t consistent enough, week in and out. I suspect Emery may well try… Read more »

Wthat team do you support Adam Guzzan?
This is an Arsenal fans’ website

I assume you are a Spurs troll with that idiotic comment

Martin why does he have to be a Spurs troll? You we’re heavily critical of Leno just a few months back, saying with some certainty that he wasn’t good enough and should be sold. But then you call anyone who criticises Ozil “Stupid” or even worse “A Sp*rs fan” You’ve had more than your fair share of idiotic comments on this forum…. Those that live in glass houses, should not be throwing stones. Ozil isn’t worth the money we pay him, and other than the odd moment of genius, he’s been consistently poor since the ink dried on his new… Read more »

So you agree that Ramsey is the only player who cares about playing for Arsenal? If you read his comment properly you will see that he was criticising the complete team and not just Ozil. I can’t imagine that even you would hate every member of the Arsenal side as much as our most creative player.

Why does an “opinion” that only Ramsey cares about Arsenal have to be considered hateful? It’s just an opinion…

I don’t hate Ozil and never have, I just think he’s a waste of resources and at times a liability, and for the record I think we have an honest group of players, who try their best.

I’m just calling out your hypocrisy, you criticise players, but when others do it… you throw insults around calling them “stupid” or even worse “Sp*rs fans”

Yes, I find the kind of anger your’e getting very odd too. If you look at what Ozil cost (£42 million) and what he’s now paid a year (£18 million), overall – and it’s important to look at his level of performance week in and out – he simply hasn’t justified the money. He just isn’t consistent enough. When he’s good, he’s very good – but overall that is not frequent enough. The club panicked after the Sanchez fiasco and agreed to a daft contract for Ozil. Even if we wanted to sell him no club will match his Arsenal… Read more »

I can’t believe that you would defend a supporter who after a good victory says that only one player in our team was trying. I suppose unlike you I like to be positive and not rubbish our players without good reason. If you think that’s being hypocritical than so be it.

Which is why I was slightly surprised we played him as much against Napoli after the groin strain.

But perhaps Unai felt it was necessary for the better control he brings.

Still injury is a concern.

Also slightly concerning was Koscielny. Again we are reliant on him with Sokratis playing himself into a stretch of suspension (albeit the Ref played a massive part)

We need to ensure he stays fit with games coming thick and fast. Apart from Mustafi and Monreal, Mavropanos is also available but it is a risk to play a novice at this stage of competitions.

Let’s hope it’s not too serious. We don’t have the strength in depth to cover too many first choice absentees and the pressure is on now to keep up the recent run of good results, if not particularly good performances (vs Napoli excluded).