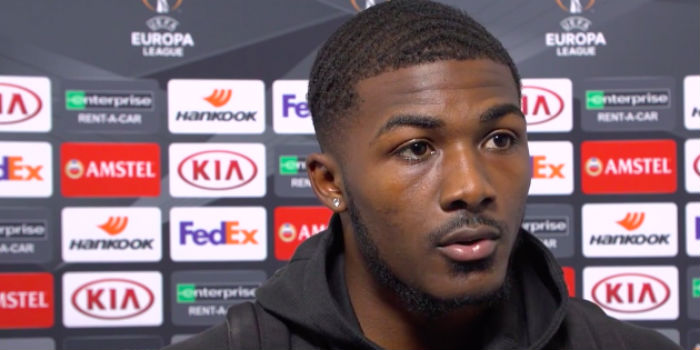 The Gunners will take on Valencia for a place in the final after Alex Lacazette’s superb free-kick secured a 1-0 win at Napoli and a 3-0 aggregate victory.

After the match, Maitland Niles, who put in a very solid shift in the right wing-back slot, was quick to praise his teammates.

“It felt like a weight lifted off our shoulders, the team deserved it,” he told Arsenal.com.

“We were good on our defensive duties today from the top of the team where the strikers were to the keeper. Everyone played their part so it was good.”

Maitland-Niles also touched on the feisty atmosphere in the San Paolo and how it forced them to be even more vocal on the pitch.

“There was a lot of noise. Coming to these teams in Europe where they have bigger stadiums and the crowd reacts differently to what happens on the pitch, it’s difficult hear your own teammates.

“We worked well, we shouted at each other so we knew what we were doing.”

Arsenal turn their attention to three important Premier League games before hosting Valencia at the Emirates on 2 May. Looking ahead to the tie with Unai Emery’s old club, Maitland-Niles said the boss has given the squad confidence to keep delivering results.

“I’m pretty confident [going into the semi-finals], the manager’s belief in us is tremendous.

“The way he speaks about us as players, individuals and as a team is very, very good.

“Everyone is bouncing off each other right now, we trust each other and believe in each other. Our ability is beyond doubt right now. We just need to keep it going into the next game.”

You’re doing great, Maitland–Niles, and long may it continue.

I feel like he’s pretty good in this position and the only thing holding him back to becoming an excellent right back is him not seeing himself playing there in the long term. I hope he won’t “the ox” himself out of the team.

We can’t say he’s fully written himself out of the position. He may end up really liking it.

I think he is very much like Kolasinac
A stop gap option in a back 4 but thrives in the wing back role.
He has the luxury at the moment of not having a set position.

I honestly struggle to think of what bellerin does dramatically better.

Have got so much confidence in this Lad… Playing in a back 5 his performances has been very good ..the challenge for him now is to deliver also in a back 4 like Bellerin used to do…COYG! let’s make it to BAKU

I think the stadium was full, except for the bottom four or five rows all around; this made it look empty when the cameras were focused on the pitch (as they usually were). I assume that because the pitch is surrounded by a track and the seats are far back, the lowest rows have poor sight-lines.

“the manager’s belief in us is tremendous. The way he speaks about us as players, individuals and as a team is very, very good.”

Wingbacks are critical in current system. Both Kolasinac and AMN make a massive difference in quality. Kolasinac I feel plays best with Iwobi in tandem. They seem to have good intuition to each other. AMN is night and day above all other options at Rback even if he is still very much in evidence work in progress with some deficiencies to work on. His power and control makes the difference. I mentioned last season Rback IS his NATURAL position. He executed Lback for us well enough and he is naturally right sided. Some people still prefer to imagine him in… Read more »

He’s really starting to get the hang of it out there and who knows where he’ll end up.

Hopefully he’s just the beginning of a steady academy influx over the next few seasons.