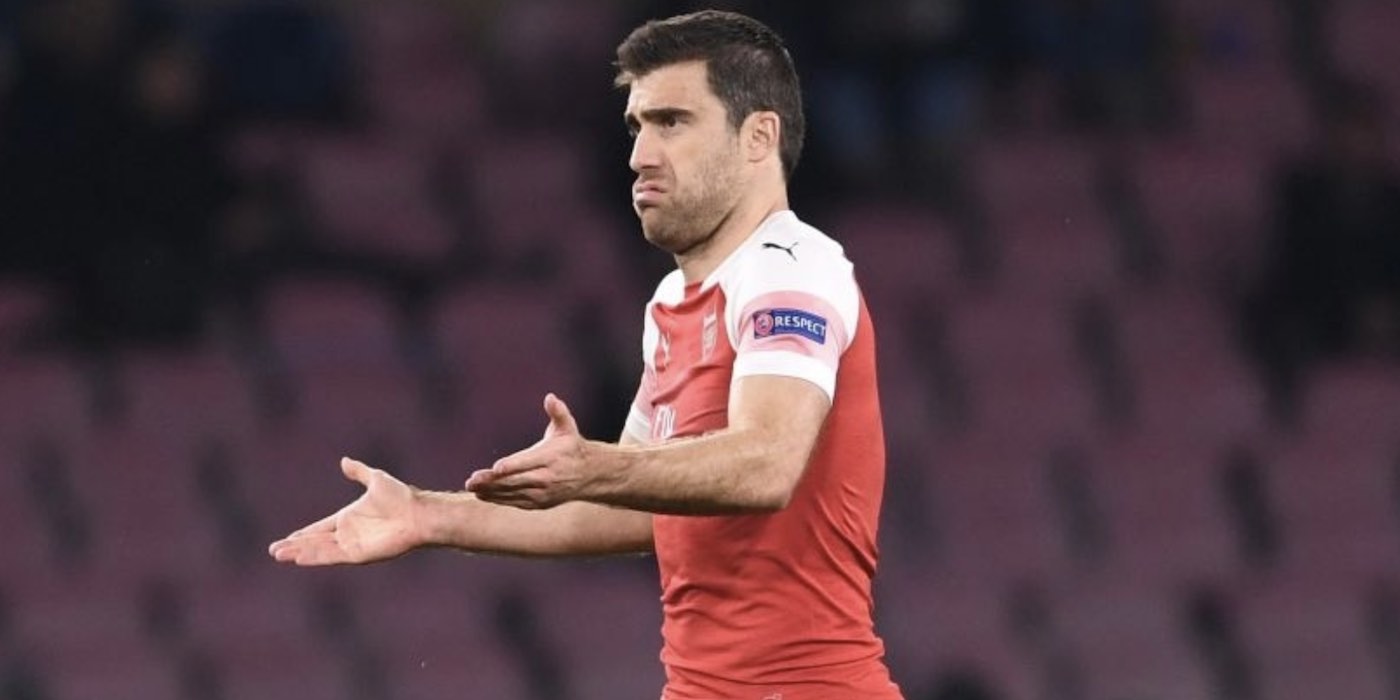 Sokratis says that last night’s 1-0 win over Napoli was made easier by Alexandre Lacazette’s 36th minute goal which left the Italians needing to score four goals in normal time to qualify.

The free-kick, painstakingly recreated below by our state-of-the-art graphics team, gave the Gunners victory on the night, and afterwards the Greek international was effusive in his reaction to it. 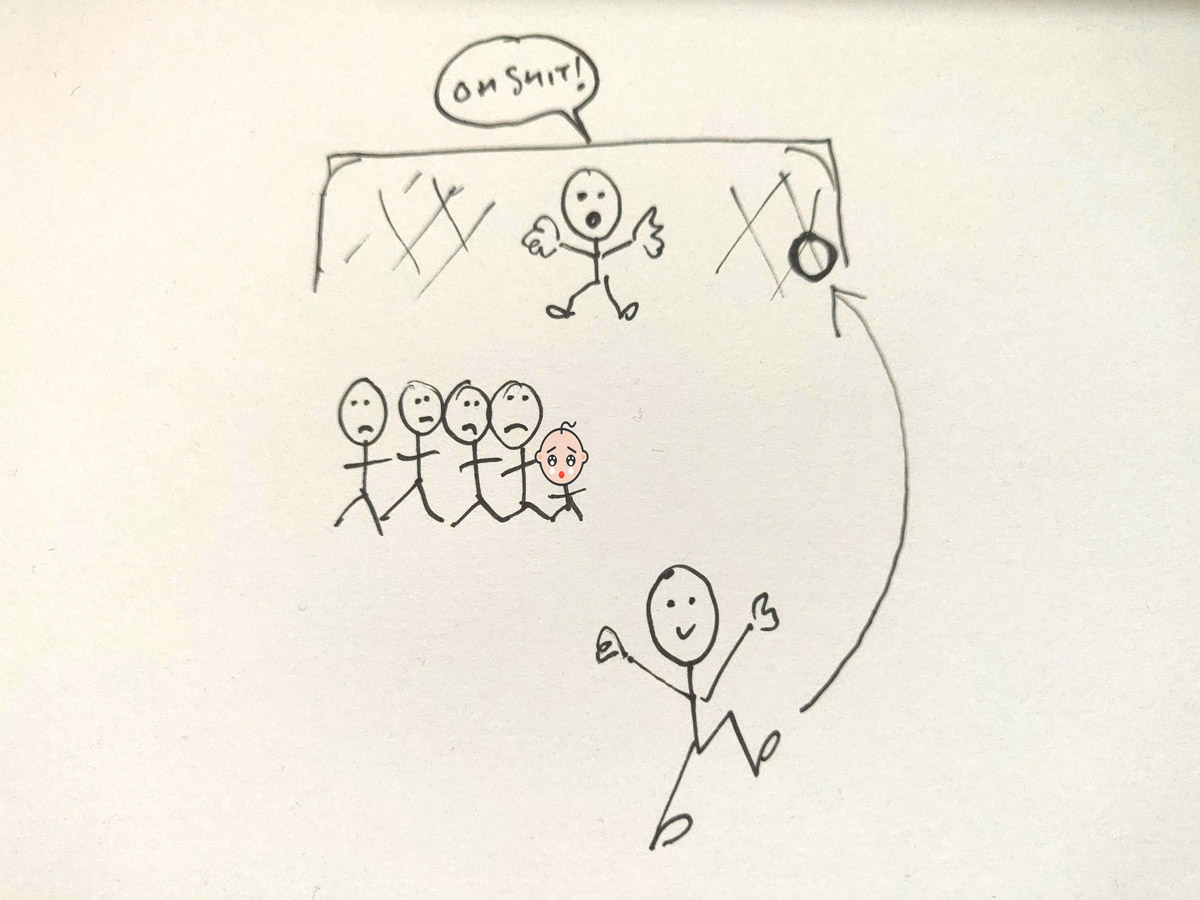 “It was the perfect night for us, we played really well and after the first goal it was easier for us,” he said with the face of a man who has just run over his own dog.

As for the semi-final against Valencia, he holds no fear and is out to help the club win a trophy this season.

“Valencia are a very good team, they play very good and are in a good moment but we also play very good, we have a big team,” he said with the countenance of someone who has just been told they have inoperable bum-grapes.

“With respect, we go there to win. It is a big chance for Petr Cech to win it in his last game and we have to give more than 100 per cent.”

If there’s ever anyone you’d back to give more than it’s possible to give, it’s Sokratis.

For more on the game, check out the brand new Arsecast

Arteta: Lacazette could have had four or five goals lately

To be frank Sokratis exceeded my expectations. With all the negatives the press were projecting about him and his how he’s not a good defender, yes he’s no Van Jerk but I’m happy with his first season performance with us so far.

I’m not quite so sure on the evidence so far. He is “average” I guess, certainly not top class and we really do need someone in that category. My worry is that he gets too many unnecessary for an experienced defender. Commitment is one thing, and important of course, but he’s still a tad too hot-headed in my opinion. That said, if we’re honest, the defence as a unit has been pretty poor overall and it will be a priority for Emery in the Summer.

True, but if being a “nasty bastard” gets him booked more times than is necessary, and then suspended … ? If you have an enforcer, for wont of a better word, surely the trick is to have him playing as much of the time as possible so he can do his job.

Go get a nap… You need it

No, wide awake thanks. I don’t subscribe to the idea that you can’t have any criticism of Arsenal players. As a season ticket holder I’ve probably seen Sokratis “live” in more games than many/almost all I suspect of the Gooners defending him here and the truth is, he’s “average”.

I’m also a season ticket holder (no need to be patronising is there?) and I completely disagree, I think he’s been fabulous this year. Going to games doesn’t make your opinion more valid or more of a fan than anyone else.

I am also a season ticket holder for Strictly Come Dancing

‘we go there to win. It is a big chance for Petr Cech to win it in his last game and we have to give more than 100 per cent.’

Won’t Cech play in the final then? (I’m assuming this is just clumsy speech).

But how do you give more than 100% ie everything?

You’re the best blogs! For some reason, this post cracked me up, probably a little bit more than it should.

“he said with the face of a man who has just run over his own dog” – that got me, it’s classic Sokratis.

Jack but
Reply to  arseblog

How come blog is the only one using emoji

Archer
Reply to  Jack but

Yes, a statement of the obvious but none the less true for that.

They’re all starting to sound like Emery now and I like it. “Good moment” “Big performance” haha

This guy is close to being my POTY. Strong, disciplined, surprisingly quick and probably the finest exponent of shithousery in the league. The sort of defender we’ve been crying out for for ages. Perfect partner for Kos. In fact, seems the perfect partner for anyone, even the enigma that is Mustafi.

“…with the face of a man who has just run over his own dog.” Brilliant.

We’re not the best team in the world nor in England, but we had one of the (if not THE) best transfer window before this season. 3 out of Leno, Torreira, Sokratis, Guendozi & Lichsteiner are in the Top 6 nominees for Player of the Season. Guendozi is young and has made many mistakes but I saw a graph showing that he is the player under 27 in the Top 5 leagues with the closest similarity to Fernandinho. 3/5 instantly great signings. 1 for the future. 1 that didn’t turn out well. Well done transfer team..

Sokratis takes no prisoners. And by the way, don’t I just love the state-of- the- art graphics. Hahahaha

We dont win anything or get near the top 4 without him an Tereriea. And Leno. Pretty nice offseason and we got the signings done early.

I never understood us not being ready for the season opener

There’s definitely a relation between productivity up top and stress against our defense. The more efficient we are with chances, the faster we kill off any belief in the other side attacking our backline. As can be seen with Napoli, they got more desperate with their efforts. Had Auba killed it off completely the belief would have been sucked out of them. We have done ourselves no favours throughout the season being wanton with chances. Laca makes a massive difference for the entire team. Its not just the link work he does up top that transform the midfield (regardless of… Read more »