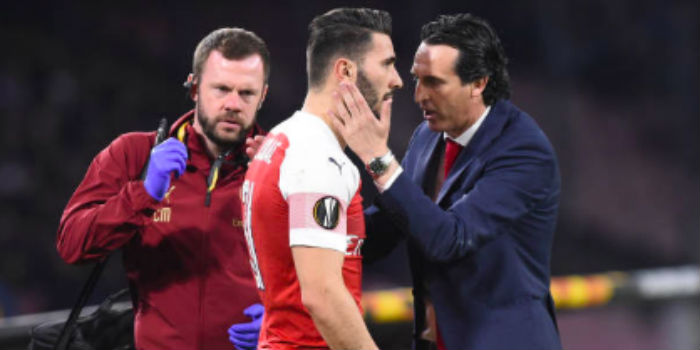 Unai Emery says he’ll definitely rotate his squad for Sunday’s clash with Crystal Palace as the Gunners look to secure a third win in six days.

Consecutive 1-0 victories away at Watford on Monday in the Premier League and against Napoli on Thursday in the Europa League mean we continue to chase Champions League qualification on two fronts into the final weeks of the season.

While the Spaniard wouldn’t want it any other way, he admits he now has to balance playing time between his squad to avoid further injuries. In a blow, Aaron Ramsey’s picked up a hamstring problem in Italy and is at risk of missing several games.

After the win over Napoli, he said: “It’s very important now for the players to have some rotation because some players are injured and after the match today we need different players with a new energy.

“Sunday is going to be very difficult, and also we continue without Sokratis because he is suspended.

“Some of the players who played today maybe cannot play on Sunday. We want to play a lot of matches, difficult matches, but we need to prepare well.

“Now it’s important to rest and tomorrow we will work with some of the players who didn’t play today. Then we will prepare in the right condition for this match.”

For starters, Bernd Leno will return in goal and Shkodran Mustafi, who didn’t feature in Naples, will likely be restored to the starting lineup. It wouldn’t be surprising to see us line up with a back four and for one of the strikers to drop to the bench. You’d also expect Mesut Ozil and Matteo Guendouzi to feature.

Arsenal hoping Auba and Gabi are fit for Chelsea clash

It’s certainly a Good Friday after a victorious, disciplined performance away in Naples.

And Monreal as well. Having Dinos play against Palace will probably be a good game to get his match fitness up. But man will we be stretching to the limit with the players we have till the end of the season

Yes, a really good, disciplined, away performance. It’s something we’ve been wanting/waiting to see for a long time now. Let’s hope we can build on it in the coming games.

Just checked the la Liga table and, like us, Valencia are in a battle for a champions league spot – good news!!!

I feel like Ozil and Xhaka are going to be huge in our run in, I hope for the best.

Just realized that our last seven fixtures have been …

… just when everyone and their dog has been climbing off the can’t-stop-conceding-goals bandwaggon and onto the can’t-win-away-from-home one. How fucking cool is that?

Ever since kos and papa started playing together, we’ve been quite strong.

take a look at our games in 2019. In the PL only MC put more than one in our net. This team is getting more stable and consistent. It´s a work in progress

Jack but
Reply to  Runzac

Liverpool had more than one in

Frank Bascombe
Reply to  Jack but

Mesut O'Neill
Reply to  Jack but

Glad you have WiFi access back Alex. It seemed you lost it from about an hour before kick off last night?

I think that was the game management that everyone’s been crying out for. With so many games coming up playing out the game without risking anything seems smart, even if it’s not exciting

Yes, it’s down to the squad now, not the best eleven. Our squad isn’t particularly strong though so I hope the good run we’re on now will encourage everyone who slots in.

Stinks about another Ramsey hamstring injury (that seems to be the main type he’s picked up over the years besides the major broken leg of course) with a busy schedule the next month. Luckily we will have a fresh Ozil and Iwobi and Miki didn’t have to play the whole match. Emery has to be careful with his rotations as we need to be able to get three points in each remaining PL match to get to 4th place in case we stumble in the Europa title chase.

Our squad really isn’t that great, particularly defensively, and starting Mkhitaryan+Ozil together with a weakened backline, is a recipe for disaster As much as I like Guendouzi+Torreira, their inexperience shows when starting together at the base of our midfield, and whilst you can’t fault Elneny’s work-rate , he’s extremely average and understandably rusty. This is where I can unfortunately see us struggling with the demands of our remaining schedule. The next 2-3 PL games will dictate which basket we put all our eggs into over the last 2 weeks. Hopefully Rambo’s hamstring’s aren’t too bad, and we can get him… Read more »

I can’t see a good situation coming from lichsteiner playing to be honest.

Mavropanos at the back is a risk. He showed some inexperience last match particularly bouncing off the striker. But Sokratis suspension complicates things at the back and Koscielny cannot possibly sustain this sort of intensity without risk to wear and tear. Its not ideal at this stage of competition. The backline should be as settled as possible. Some sharp drop offs in quality too. AMN is patchy still but showing decent signs of progress. Thereafter Lichsteiner is a waste of money considering availability (what was Mslintat thinking…if he was) Jenkinson is so average Emery prefers to start Mustafi at fullback.… Read more »

Higher up the field, there is more room to tinker with. I feel midfield is where the most rotation should take place. Whilst Granit-Torreira remains the strongest pairing, the issue is more about sustaining energy level and drive through the final run in. In that sense there is plenty of room for Guendouzi and Ramsey. but with Ramsey knocked (prob this issue with injuries played a role in final decision not to extend him for asking salary), then we are better to rotate in to contention the likes of Elneny. I don’t think Elneny adds much going forward but he… Read more »

At apex, I feel Lacazette is INDISPENSABLE. How we can sustain him through to end of season may be critical. He makes a massive difference regardless of midfield personnel because he links play and has the nous to interpret and make the right decisions where Auba largely is unable to hold the ball for us sufficiently enough. Plus the two up top (at least at start of games) has been a real issue for opponents to handle. Perhaps a good measure would be to start fast with both strikers and rest one once we go into a healthy lead (2… Read more »