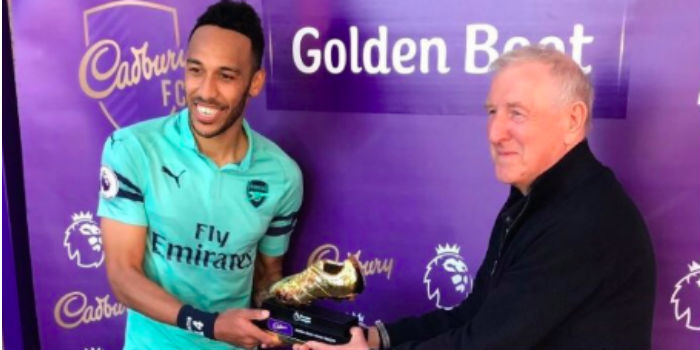 Pierre-Emerick Aubameyang’s brace against Burnley was enough for the Gabon international to claim the Golden Boot alongside Liverpool duo Mohamed Salah and Sadio Mane.

Our record signing took his tally in the league to 22 goals and might even have won the gong outright were it not for a terrible close-range miss when he was on a hat-trick.

While he might be kicking himself about that, he can be happy with a pretty impressive week’s work. Not only did he put in a huge shift at Turf Moor, but he also scorched Valencia with a hat-trick on Thursday and netted last weekend against Brighton.

After the match, Auba thanked his teammates for helping him this season. “It was a tough season but I had the chance to score goals, because the team played a great season,” he told Arsenal.com.

“Of course the last months were not the best in the Premier League, but the whole season, we put in a great effort.”

He added: “I said nothing to the guys [about the Golden Boot] because I didn’t want them to only focus on me. I’m a team player and if I wasn’t scoring, it wouldn’t have mattered. But I scored and I’m really happy for that. I have to be thankful to the team.”

He also touched on this afternoon’s miss. “Yeah, it was near – but sometimes that can happen. I have to be focused on those kinds of chances, but I’m happy that we won and that I’m sharing the [Golden Boot] trophy with two other guys that I like.”

Aubameyang could end the season as the Europa League’s top scorer, but he’ll need to score at least twice against Chelsea in the final in Baku. I think we’d all like to see that.

Congratulations, Auba. We’re lucky to have you.

I dunno I think we appreciate him quite a lot

At the time of writing this comment, both Romford Pele’s underappreciated and Anonymarse’s – appreciated, comments have been down voted twice and up voted 11 times.

Quite clearly, couple of Spuds trolls lurking! I wonder why. I’ve never been on any spuds blogs, are there any? Do they even write!

Who doesn’t appreciate him ?

The idiots thinking we should sell him.

No doubt they had a 4th on site incase Aguero stole the show.

Congrats Auba ! And finger crossed this is not the latest Trophy you’ll enjoy this season. On to Baku, COYG!!

Feels great to have a striker who would guarantee score 30 goals per season for you. Very happy with him 🙂

Aubameyang and Lacazette are an absolutely fantastic striking duo but I do feel like we still need a plan B striker – a big man who we can feed the ball into when we’re struggling to find our way through. I would gladly have taken Giroud back for a season, especially considering we’re likely to be playing two up top and we only have two senior strikers. Something to consider in the window but unlikely to be a priority.

I think we need another similar good forward who can score goals. Too much reliance on these two.

Hopefully one of the youngsters will step up.

Rather than another centre forward, I think what we really need is at least one class wide forward. Someone that can score goals and create chances equally well. Creativity and work ethic is a must.

While it would be great to have the variety, I wonder if it’s really necessary. To an extent, Lacazette does some of the functions of a ‘big man’ for us, holding the ball up and challenging aerial duels. Also, City don’t have a striker like the kind you’ve described, and neither do Liverpool.

Yes, yes! We are lucky to have him and Laca. If only we can correct the recurrent mistakes of seasons past and get quality reinforcements in other areas as well, we could become really special.

As an African, I’m proud to have 3 great guys sharing the golden boot in the best league. Africa salutes

One thing is quite strange that is for sure. How come Egypt is in Africa? Middle East isn’t it? Closer to Syria, Israel etc.

Look at a map. It’s part of Africa.

Because it’s on the continent of Africa…

Wow! Just wow! Have you seen the map?

If Madagascar (Though detached from the continent) is considered to be part of Africa, then there should be no doubt at all about Egypt being a part of Africa.

Well deserved. Shame we don’t have a defence to match.

Congratulations to Oilmoney FC for buying another title: it’s amazing what unlimited finance via a state-owned company can do. They’ll probably do it again next year. If you include the handicap then Liverpool are the real champions. I’m so glad Pep’s all-stars didn’t win the Champions’ League.

Now let’s beat the Chavs and win the Europa League.

Not sure the reason for all the down votes? Maybe it’s just an automatic response to your posts as a result of your old anti Wenger rants?

Or maybe because some fans don’t like Liverpool either. Neither do I, but I can appreciate the fantastic effort they made to keep up with City all season. Wenger was right when he talked about “financial doping”. Bearing in mind that City were under investigation for how the club was financed, how honest is this title win? This all stinks.

Maybe bc he missed the biggest part. Let’s hope the Spuds don’t win the CL !!

hope you’re right…. minus the one bit 😉

moderation, moderation every fucking comment moderation. fuckin sick of it, why the fuck do i bother to fucking comment. love Arseblog but but jeeezus fukkin kriste am i sick to death of moderated comments.
I was named after Brady, been a Gooner since I could speak and now my 3 year old daughter sings “by far the greatest team the world has ever seen” in fukkin public no less, but my measely comments get fukin moderated
basically fuck off with your moderation bollocks.

Feel exactly the same in regards to Liverpool, but if it’s a straight choice between them or the spuds then I’d rather Liverpool win it. Man city are everything that is wrong about football….. and politics for that matter.

I mean it does say PL.
You know football wasn’t invented before then.

We are happy with our strike force, we should rather work on our defensive lapses, then we can challenge again

Excellent season for Auba. Wish he put in the chance against BHA, we would be in CL and he would be outright winner. As good as he has been, much room for improvement. We saw some last match with his second goal against Valencia as he moved proactively toward the ball put in by AMN. But protecting the ball and winning high balls still an issue. Plus can still be sharper (another chance today close to end of game not taken) Which is a good thing bc, imagine our striking pair improved next season. As much as we need to… Read more »

What more can you say about this guy. Been here 16 months and scored 41 goals, all with a wonderful smile on his face. His example should be able to raise the game of others in the team too.

Please bring in a centre back to make sure he doesn’t waste his goals next season.

First full season for us and he takes home the golden boot. World class and we are lucky to have him. Like you said we need a defence to support his goals. Even more though, we need a midfield so we can impose ourselves on games vs the non-top-six. I know we have a fair few duds in this squad, but if we can make a couple of astute buys in specific places to beef up our spine (centre def and centre mid), plus some of the younger lads keeping developing (Willock looks to be the real deal!, then we… Read more »

Indeed lucky we have you, you make any defence look slow and dated 🙂

Well done Auba! We’re waiting for that brace vs The Blues… *no pressure*

‘Cos its a team game dude, he is not the only player inn the team, if others would do half as much as he does, we would have been sitting pretty in third right now. He can cut down on those misses though.

all golden boot winners are from the African continent