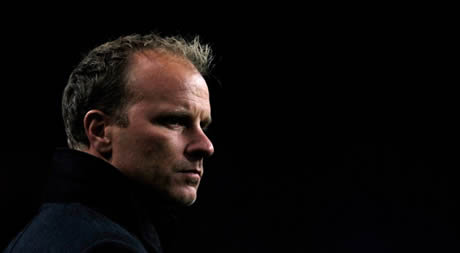 Dennis Bergkamp says he’s ready to return to football and sees himself taking a position outside the Netherlands.

It has been nearly 18 months since the 50-year-old was sacked by Marc Overmars and Edwin van der Sar due to ‘a difference of opinion about the technical policy to be implemented’ at Ajax.

Bergkamp had returned to Ajax, the club that gave him his debut as a 17-year-old, in a coaching capacity in 2010 as Johan Cruyff looked to get the club back on track after six years without an Eredivisie title. He went on to become Fran de Boer’s assistant in the dugout but took more of a backseat under Peter Bosz.

On the lookout for a new opportunity, the Arsenal great explained that he’d ideally use his experience to nurture up-and-coming talents.

“At Ajax, I formed a bridge between the academy and the first-team,” he’s quoted as saying in the Mirror.

“And I want to work in a similar way – talent development, a role on the coaching staff and, where needed, working individually with top talents.

“We’ve seen many styles in the game but whatever you analyse, it comes down to pure football talent – and developing that talent.

“That’s where I want to contribute. At Ajax, I was not just focusing on the first-team strikers when it came to specialist training, I also enjoyed working with strikers in the academy – taking them to a higher level.

“My time at Ajax ended very suddenly. But I’m not done in football yet. I now see myself getting a job abroad.”

Bergkamp also touched on the important role played by Cruyff, who died in 2016, in luring him back to Ajax.

“Cruyff’s influence runs like a thread through my career,” he said.

“He was the one who picked me out when I was still playing in a youth team, putting me straight into the first team, while others had doubts.

“Johan came up with his blueprint for Ajax in 2010. We both felt things had to change and we were on the same page immediately.

“We had dinner and he opened my eyes. That was the beginning of the ‘Cruyff revolution’ at Ajax.

“The club had been going in a certain direction. But Johan and I had different ideas to them about coaching and producing players.

As much as any Arsenal fan would love to have Dennis Bergkamp back at the club, it doesn’t feel like we’re set-up to accommodate his genius at the moment.

Dennis doesn’t want – or have the experience to undertake – an administrative position, which rules him out of any link with the vacant Technical Director position.

The major roles at the Academy are currently filled and Unai Emery, whose coaching team he tends to take wherever he goes, is unlikely to want to bring in a man with a reputation that could in any way undermine his own.

We could create a position out of nothing (it’s Dennis!) but that’s something that Arsene Wenger often suggested was a bad idea. Perhaps the timing isn’t right. No doubt, this news will have other clubs on red alert though. It’ll be interesting to see where he ends up.

We should have gone for Overmars as Director Of Football, he’s that ruthless and single minded that he sacked his mate and didn’t blink an eyelid in the process?….

Overmars was giving bad passes to Henry on purpose and it was out of jealousy. Old fans know Henry was making these accusations.

Henry did the same to Reyes. For precisely the same reason.

Overmars lost me when he said there was no reason that Sanchez couldn’t come back to Arsenal. I don’t want Overmars or Bergkamp, they’re massive egos and that doesn’t end well in a training environment.

“Leave now, and never come back.”

You don’t get to call Bergkamp and remain on these boards.

I’d love to see him return and work alongside Freddie!

That goal against Juve ☺️

That goal against Leicester?

You literally read my mind or maybe I read yours lol

If he comes to England with any club other than us, a part of me will die inside. Absolute gem of a player and he absolutely must have a position training the Arsenal players in some capacity.

Would love to have Dennis back at the club.

Mind you, getting George Graham out of retirement as defensive coach wouldn’t do any harm!

A few of my mates when I was a young lad had the likes of Bergkamp and the de Boer brothers take them for the odd coaching session once a week. They’d come in the next day and show the rest of us what was what! I think his value as a football educator can’t be overstated, not just because of my silly story. He really does have the football equivalent of a doctorate. His understanding of the game on a technical level, from control of the ball to space, to movement and opposition management is legendary. I remember an… Read more »

Small bit of Keown interviewing the great man…pointless hypothetical I know, but just how much of an influence would Bergkamp have had on Ozils Arsenal career? You get all these anecdotes from the likes of Henry and van Persie and Justin Kluivert about how much he did for them… just something to think about. Great little interview either way.

Dennis didn’t invent playing with a tennis ball. Of that, I can assure you.

Well over the years, Trevor Brooking has often spoken about how, when growing up, he sometimes used a tennis ball to play football, which he subsequently discovered improved his technique when using a real football to play the game.

And Brooking is at least twenty odd years older than Dennis Bergkamp.

But the real point here is that different players in different cultures at different times all have their own stories about how they developed their football skills and techniques, and that no one person or culture or country has a monopoly on how to do it.

I practised with the tennis ball ala Brooking’s advise.

Have to say my close control isn’t too shoddy thereafter. Works.

IIRC in Dennis’ autobiography he describes initially playing with a scrunched up ball of paper until someone gave him a tennis ball.

He would watch the flight of the ball and how differences in speed, spin and how it bounced would affect it’s movement. He described it as an obsession and something that when he took up playing golf, it was a behaviour that resurfaced.

I do wonder if it would really be impossible to find a role for him in talent development within the club. It would be interesting to see him get a role where he helps to further the development of the club’s young talent.

He won’t need to travel much and he has experience in this area.

Its the new generation Academy core.

Some interesting younger ones coming up Sakho, Nketiah. Maybe a bit lacking with Cbacks (Bielik?)

Media often doesn’t give us the credit we deserve.

Well, this should be a bloody no brainer, shouldn´t it? It would be really horrible to see him turn up at any other english club. He´s an absolute legend and would be welcomed with open arms from nearly every Arsenal fan (which is a rare thing these days ..). Turning down Fabregas back in 2014 for example was one of AW´s lowpoints: he would have energized the fanbase, would have helped on the pitch (even more so after Santi´s injury) and basically wouldn´t have turned up at Chelsea, which was awful to see. Can you think of a better guy… Read more »

He will still be mobile on the pitch.

Always the right time for him. You know…. God.

I would make the role ‘Arsenal God’ for Dennis, I mean he is already but let’s make that shit official for fuck sake.

Fuck it. I’d tell Gunnersaurus to fuck off and pay Bergkamp to be our permanent mascot

Give him the number 10 shirt

He’s got a bloody statue outside the ground. If we don’t get him back in when we have the chance it’ll be idiotic.

Turning Dabizas inside out…… Thats the Dennis I remember

He’s coming home (from what I heard when in Valencia). Mark this comment.

Please Arsenal must create space to acomondate Denies Bergkamp we Arsenal Fans Loved him he is a Great Player to us.

We should try and get Luis Campos off of Lille. Proven track record first with Monaco and now doing great things at LOSC. But it may entail shifting Raul upstairs (not necessarily a bad thing bc we don’t have a suitable Chief Executive (with sufficient clout) after Gazidis departure to function as a balance between management and owner. Experience in market is key for us now. If we want to punch higher, we need to be very shrewd and astute with our buys. You pay for what you get (most of the time) Naturally there is risk in everything especially… Read more »

A word about City…sure they spent money like water and we can never emulate that sort of construction… BUT you’d be very blinkered as well not to appreciate what Pep has achieved as well as the brand of football they play. They were simply outstanding. To stay ahead of a very good Liverpool side this season (with that false messiah Klopp) and win the title. Never mind CL failure to Spurts of all teams but they’ve also won the two domestic cups, one against Chelsea. They literarily tore apart Watford. Where we’ve struggled to find solutions against teams like the… Read more »

The way he worked at Ajax you could justify paying him just to work as a technical/attacking coach for a select group of players (Iwobi, Nelson, nketiah, Smith-Rowe etc) if it started to cause friction have him just work with the academy.

I’d sack the entire hierarchy and have DB back in a heartbeat.
Best footballer we ever had.

Leaving all sentiments aside, can Dennis be credited for some of the success of the Ajax academy in recent years? I know they have always had a good academy traditionally, but if you read Stillness and Speed, he talks about the changes he made to the way young players were taught – more room for individualism and less attention to making sure everyone does the same thing. The idea was that the academy was churning out lots of very similar, technically good players, but none of them had that spark of something special. I wonder if that is paying dividends… Read more »