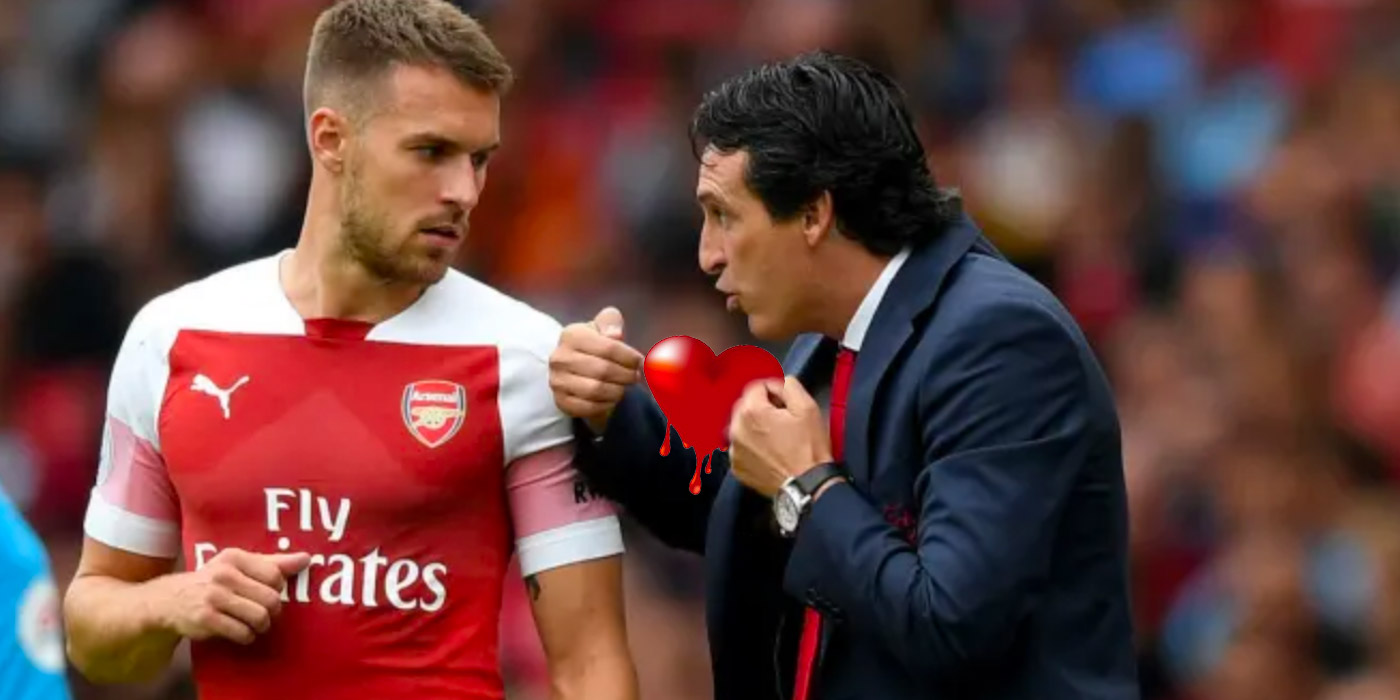 Unai Emery says he’s enjoyed working with Aaron Ramsey this season, after it was revealed that the midfielder will miss the rest of the season – including the Europa League final at the end of May if we manage to get there.

That means he’s played his final game for us, and although there’s some talk of a guard of honour for him and Petr Cech ahead of Sunday’s final home game, it’s a blow for the player and the team with still so much to play for in Europe.

Speaking ahead of the semi-final first leg against Valencia, the boss was asked about the Welshman whose hamstring injury against Napoli turned out to be much more serious than first thought.

“For me it was a good experience to work with every player and with him especially, because he can transmit his energy and he showed me his heart is red with Arsenal,” he said.

“I wanted to enjoy with him. I said to him one month ago that I wanted to do something important in his last matches with us at the moment – maybe he can come back in the future.

“It will not be with him on the pitch but he is still with us. He is with us this morning and also I spoke with him for two minutes yesterday.

“He is with us and he feels Arsenal, and he wants to enjoy the last matches with us.

“Injuries are like that. It is the same for Bellerin, Holding and Danny Welbeck.”

It is a real shame for Rambo, who had been playing so well until another injury left him sidelined. It’s sad, but also not exactly surprising, and it makes our lives more difficult in the final games of this campaign.

Black and white and red all over.

Need to know who from the club decided to pull the contract and why in the world it was justified.

Please show a little more class, Alex. The man had his leg folded in half for the club and has stayed with us during lean years when he undoubtedly had options. He’s scored cup winners, he’s run is gonads off, he’s chased ghosts, and done it all with class and determination.

Red heart… What a concept.

It certainly is not stripped black and white, unless he has a bad cardiac disease of done sort….

A fitting and predictable end for the Welsh Diaby.

Do one, Nick.
No patience for people who lack the decency to honor a dedicated servant to the club.

I’ve never understood Stoke fans booing Ramsey. However, for one of our own to insult him and Diaby, both of whome had their legs broken by thugs of the league, is…shameful.

Both players tried their hardest and neither were on massive salaries. The club acted classy in supporting them through theirs and Carzola’s injuries. While not the biggest fan of either Ramsey or Diaby, I’m happy they were with our club.

Shameful is the polite way of putting it. Fucking disgusting and moronic for an Arsenal fan to insult a guy who has given so much to the club over the years.

I’m so gutted for Ramsey and for us. He’s the one player who has really pulled us through games this season. He’s also a real big game player. The rest of the midfield have to step up their games because they’ve been a massive let down recently whilst some of the more advanced players have been lightweight. We need 100% from everyone. And fuck our away form. There shouldn’t be any difference in the way we play home or away. If we’re to come away with something we need everyone to perform. We shouldn’t take Valencia for granted or we’ll… Read more »

I’ve been on the fence regarding Ramsey over the years as I don’t believe he’s consistently delivered the quality that he’s clearly capable of. He’s not been nearly as bad as Theo and thankfully injuries haven’t been as bad as Diaby. However, I always believed he had more in the engine room especially after ‘that’ season and this season goes in some way to proving the talent he is capable of demonstrating. No doubt our recent run of rotten form is partially due to his absence. I must say though, that on the basis of this season, that I’m pretty… Read more »

Such a shame. For him & the club

Emery can piss off. Here he is giving an obituary to Ramsey, when it was Emery’s own fault that the proposed new contract was torn up as he didn’t rate him as a player, picking Iwobi and Mhkytarian every week and leaving Ramsey on the bench, sometimes criminally even playing Guendouzi ahead of Ramsey.

…and you know this bit of information how???

The decision to revoke the contract has nothing to do with Emery who clearly wanted Ramsey to stay. Get your facts right before making unnecessary criticisms

The more I hear how Ramsey loves Arsenal, the worse it makes me feel now. Depressing week just got worse with this news. Sucks that he won’t get a proper send-off.
Since Ramsey’s been put our recent slight upturn in performance and results have taken a nose-dive. :/
Come on Arsenal, don’t fuck up the Europa league now.

I have absolutely no doubt of his love for the club. He has always left it on the pitch and done so with dignity and dedication.

Happy Trails, Aaron Ramsey. Go get yourself a Scudetto.

Is Emery taking the piss? He waits until Ramsey has played his last game for us and only then, does he talk about him as if he were one of our best players. I still can’t believe we screwed up and let Ramsey leave / pushed Ramsey out (who knows what the real story is), but its a bit late to act like you love Ramsey after you ignored him for months on end earlier in the season. Emery wasted his last season with us. Emery does not have the skills to manage a team through a season of league… Read more »

I think Emery is quite clearly inferring here that it wasn’t his decision to pull the contract.

Maybe it was Ivan’s parting gift to us, who knows, perhaps we’ll never know.

How good was Aaron this season? Look what has happened since he got injured ?