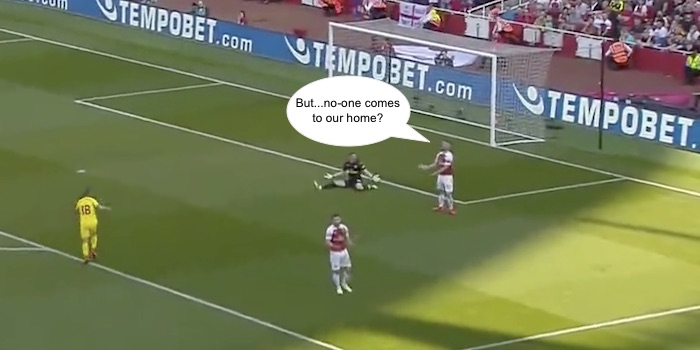 Arsenal’s First Team Operations Manager, Ameesh Manek, has been fined £8,000 after he accepted a misconduct charge from the FA.

Manek is understood to have had words with fourth official Stuart Attwell and referee Jon Moss at half time of our 3-2 defeat to Crystal Palace at the Emirates.

[1/2] Ameesh Manek, Arsenal’s First Team Operations Manager, has been fined £8,000 after he admitted a misconduct charge from The FA and accepted the standard penalty. pic.twitter.com/NRq46KirCh

How did someone whose day-to-day role is to ensure the matchday experience runs smoothly for the players and coaches get himself into this situation?

It’s not immediately obvious, although the Mirror did run an article saying Unai Emery had invited Manek to host a pre-game huddle with the first team squad; a duty the Spaniard has been rotating around the backroom staff to foster a sense of togetherness.

We can’t verify this, but it’s said Manek had players chanting “We are Arsenal” and “No-one comes to our home” in the style of an All Blacks Haka.

Quite why you’d shout the latter when the Premier League fixture list entails at least 19 home games is beyond us.

Football that’s why.
Its civilised war and anything (legal) that gets the soldiers hyped before a battle is seen as an added advantage. Even the terminology we use for this game like attack, counterattack, defence, formation, flanks etc are very warlike.

“No-one comes to our home” doesn’t even make sense.

Fair enough. But in that moment it’s not really what u say but how u say it and the intention behind the words.

That’s the part I didn’t understand. If it had been ‘no-one comes to our home and wins or draws’ (which would obviously be a mouthful) then fair enough. But no one coming to our home is just odd.

It’s our fortress, so it’s to say that no one comes here and leaves with anything other than an ass kicking.

I once did a job where we were obliged to form a huddle at about five to nine every morning and chant “sales, sales, sales” over and over.

I still take a shower every time I think about it.

Was it a sales job?

Could have been a yacht chandler’s for dyslexics.

Better the Devil You Know
Reply to  Scwibble

This it’s clearly this. (if it even happened, that is)

He’s a Maniek and his pre-match huddle clearly went Amissh.

The idea that with an 80%+ win rate at home (at the time) the players need to be hyped up for a home game seems truly bizarre….but maybe that’s just me.

Given the performance, I hope we henceforth ban this guy from any more gee-ups.