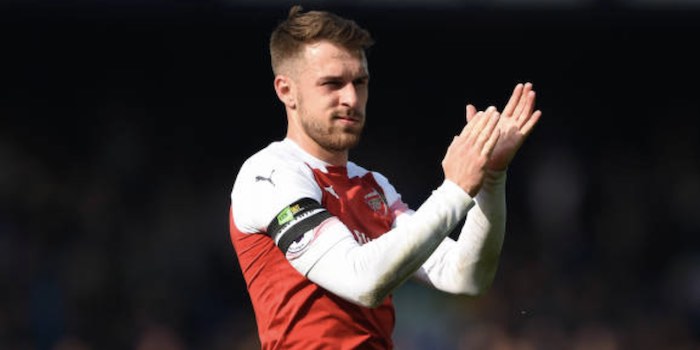 The Welshman picked up the problem in the first half of the 1-0 win over Napoli in Italy and it now looks as though that will have been his final appearance in an Arsenal shirt. The midfielder is set to join Juventus on a free contract this summer.

Arsenal’s medical team continue to say that Ramsey’s situation is being assessed but Ornstein has it on good authority that the player has lost his battle to return inside the next month.

Speaking to the BBC, Ornstein said: “Aaron Ramsey’s Arsenal career is over after it emerged he will miss the rest of the season with a hamstring problem.

“It was hoped he might recover in time to feature before the end of the Premier League campaign or a potential Europa League final. But the 28-year-old needs longer to recover and has therefore played his last game for the club.”

In obvious discomfort when he was substituted at the San Paolo, we did fear at the time that Ramsey had sustained a serious problem. It’s very sad news for all concerned, not just from a sentimental point of view, but also because he had played his way back into form. In his absense we’ve lost three consecutive matches.

Presumably, Arsenal fans will get a chance to say goodbye on Sunday in the post-Brighton lap of appreciation. Alas, he won’t be signing off with another cup final goal.

Properly gutted. The script seemed perfectly set up for a cup final winner to say goodbye. And aside from sentiment, thats comfortably our best midfielder (and arguably our most in form player) out of the most important games of the season.

Maxin In The Shade
Reply to  Jacob

You said it better than I could

Seems it’s always never working out for us. It was also a good moment to see Wenger retire from Arsenal but alas.

I hope not, a great servant for the club, came back from having his leg broken to score 2 FA Cup Final winners.

Crazy we are at this stage (I’d have preferred to have kept him) but good luck to Aaron in the future.

“Aaron Ramsey’s Arsenal career is over after it emerged he will miss the rest of the season with a hamstring injury.”

This makes me sad.

Let’s send Juve Mkhi and tell them he’s Aaron. Everyone one’s a winner. (Except Juve…. and probably Aaron because we’re shit and Juve aren’t)

Look at Juve’s record of picking up good players for nothing or small fees, it’s excellent compared to ours. So don’t think they would be daft enough to take Ozil, Mkhi or any of our dross – shame.

When it rains it pours!!!

Pretty much as expected. He’s not able to manage a full season without a soft tissue injury

Not sure why this got thumbed down so much. He’s proven that he’s a great player when healthy, but he’s had bad injuries almost every season

It was thumbed down, at least by me, because of its nasty, ungracious, unappreciative tone.

The final is on May 29th, still an outside chance to make that, even if he’s only on the bench and can only play the last 15 minutes…..

Our season is over too.

I thought he was the promised one. Destined to kill the Night King… I mean score a winner in his last ever cup final for us.

Well, this is even crappier screenwriting than on last episode of Game of Thrones.

Probably right. I’m just so disappointed with that episode I had to project it somewhere.

I love the guy, but we needed this. Let me explain. We know the reason why in the end so many people get frustrated with him. Every time he got a run of form, he’d get hurt. And he takes ages to get back up to form again. If he’d just stayed fit all the end of the season, we’d be killing ourselves for letting him leave. Instead, he has reminded us in large part why it happened. So long. Legend. I’ll never ever forget the FA cup final goals, I’ll never forget the season where he looked like he… Read more »

I’d rather him help us to win the Europa League and then deal with the annoyance of letting him go, but there you go.

I get what you are saying but It would have been wonderful to send him off with a European cup final in which he would have participated in.
Now we’ll have to to try and do it without him ,but for him.

And you’re right, he is an Arsenal legend. Breaks his leg and comes back to score two FA cup winning goals. His full blooded performances in this, his last season with us, proved what an outstanding player and man he was for us. Wish him well and good health.

Has his leg broken you mean…

Sad that he doesn’t get to see the season out – Rambo seems like a thoroughly decent guy who has always given 100%. But this is typical a Ramsey moment; playing a string of games before missing a few months with injury, season in, season out. He has divided opinion on his value to the team, undoubtedly talented when he’s ‘on it’, incredibly frustrating when he’s not. Cup final winners and moments of real class, wild misplaced passes and poor decision making. Maybe we are over reacting to another stupid poorly managed contract wind-down situation by playing up the real… Read more »

I wish. I hope.
But the thing about giving away a 28 yo player who’s a world-beater when he’s ‘on it’ is that this is around the age where they are ‘on it’ more often than not.
Sometimes it’s exactly as u say though. For every RVP there are Sanchez and Flaminis out there.

If I could turn the time backwards I would rather have given Ramsey a new contract and leave Ozil on a free.

If we could turn back time we should have sold Ozil and/or Sanchez in summer 2017; then we’d have

1.no Mkhi;
2. no inflated wage bill because of Ozil and Mkhi
3. could have made a reasonable offer for Rambo’s wages,
4. some cash with which to buy two players of our choice
5. even if it had worked out 50/50 we’d have a good player worth some cash

and that’s why Wenger had to leave.
some people said that Wenger would have wasted the money, and that City would have won the premier league we sold them Sanchez,

I was of that opinion at the time. I seem to recall James “from Gunnerblog” said the same, as he did about Aaron Ramsey last summer (which I also agreed with).

Shame!! Big if, but if we did manage to win would he not get a winners medal?

He has a muscle injury
We let him go for free
What a major flub
By our shambolic club
Aaron Ramsey, Aaron Ramsey!

Resting in therapeutic tubs
He won us two cups
Kept us in the top 4 hunt
Ryan Shawcross is a cunt
Aaron Ramsey, Aaron Ramsey!

It’s a huge shame for us because Rambo was starting to string together some decent performances – but THIS is why Emery hadn’t been playing him as consistently as some numpties would’ve liked. Make no mistake that the way Ramsey has been carefully nurtured by Emery and the medical team is the only way you can get the best out of him. Unfortunately, with all of the injuries and suspensions to other midfielders we were forced to give more minutes than Ramsey’s body could handle and the result is yet another muscular injury that could rule him out for weeks,… Read more »

So he is not a player around whom you can build a team; As far as I can see, we do not have such a player; and that should be our first quest !!

I know many people are content to see him leave, but for me it is more Arsenal identity/DNA out the door and that is a loss we simply won’t recover — especially since we no longer appear to resemble ourselves on the pitch any longer. Most of all, though, I don’t think it really matters at all what we think right now: I imagine Ramsey is gutted more than anyone about having to sit and watch his beloved Arsenal choke down loss after loss after loss … That’s no way to go.

Our DNA has been a string of players, like ramsey, whilshere, wellbeck, walcott, ozil, who play a little and masterfully on occasions, then want a lot of money) spend a lot of time in the injury rooms, and never fulfill their potentials. we need to get real, this has become a very physical game, and we need players who play the bulk of the season without recurrent injuries,

We do have a terrible record with injuries, but those masterful performances you refer to have earned us a few FA Cups in recent years and a lot of very beautiful goals. The joys of football.

A Different George
Reply to  ealing

I wonder if other teams feel the same about their injury record. Lallana at Liverpool, for example, or Benjamin Mendy at Man City, to name two current players who have left big holes in their respective teams. And yet, they are fighting for the title.

Woke up in such optimistic mood – dreamt that we won the EL and ended up 3rd in PL where Auba took the golden boot. Well anything can happen – right?

Farewell to Aaron – ups and downs but sure some memorable winners

and that can still happen, which is more than we can say for last season when as far as PL was concerned we had to give up the ghost in early March 2018

But what does it matter when we give up the ghost if we end up in the same position? As By the Numbers pointed out quite clearly, we haven’t improved thus far under Emery.

But we have!! and since we can all see the stats for the last season, I don’t care what By the Numbers says about this.
Even if we loose the next two games we end up with one less loss, and one more win. We will have taken 3 more points, more points against the other top 5. It’s not great, and we are right to be upset about it, but to say that we have not improved it’s a lie!!!

Exactly…some people seem to think improvement has to be on the grand scale….but we aren’t winning the PL any time soon. We haven’t made leaps and bounds but we have definitely improved and as already said are still in a shout with the top 4 and a European trophy…some people want jam and caviar on it!

I suppose you can ignore the stats, but that does make it easier to discount the validity of your claim. In all competitions: Last Season: W32, D10, L18; GF 111, GA 72 This Season: W32, D7, L14; GF 100, GA 62 Emery’s got 4 more games to play, for sure, and he might well ring up four wins (and then perhaps another) and pad our goal difference, which would deepen any sense of improvement perceived by supporters and critics alike, but to celebrate gaining 3 more points as improvement is really setting the bar pretty low in terms of expectations.… Read more »

Of course we’ve improved particularly bearing in mind where and how we finished last season. I’m tired of hearing this frankly untruthful lie that we haven’t improved.

I’ve loved you for a long time, Aaron Ramsey, but I won’t miss your injuries.

We’re 100% not winning the Europa league, no chance without Ramsey. I’ll love to be proved wrong but it ain’t happening ?