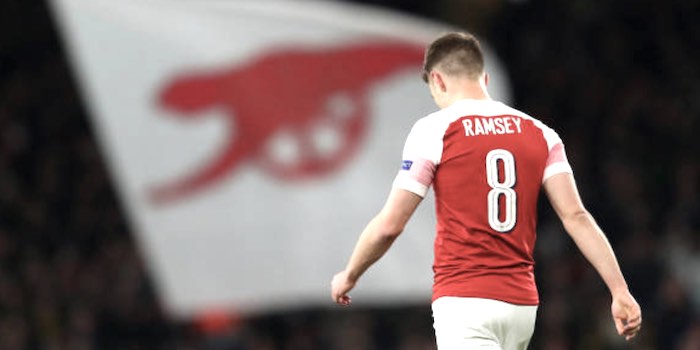 Arsenal have confirmed that Aaron Ramsey will miss tomorrow night’s Europa League semi-final against Valencia, but perhaps significantly have not ruled him out of any further games.

The Welshman picked up a hamstring strain in our 1-0 win away at Napoli in the previous round, and has been sidelined since. Reports in the last 24 hours suggested his season was over, but the club have not confirmed that in the latest medical update.

Those reports also appear to have originated from The Sun, so we can hold out some hope that it’s not true based on that alone, but we’ll wait and see if Unai Emery provides a bit more detail on the midfielder when he meets the press later this afternoon. The initial diagnosis was that he’d be available again inside three weeks.

Arsenal have, however, confirmed the absence of Denis Suarez who himself announced his season was over on Monday after failing to recover in time from a groin strain.

Nacho Monreal remains a doubt after missing the 3-0 defeat to Leicester with a calf problem, while there’s no mention at all of Mesut Ozil so we assume he’s recovered from the foot injury which kept him out of the same game.

Hope he’s back for the second leg. The last couple of weeks have shown how important he is to our midfield. We don’t really have anyone else who can carry the ball and drive at defences and put in the work rate rambo can. Torraira to an extent but he’s much more useful at breaking up the oppos play rather than creating ours. I do wonder if we don’t go out an sign anyone to replace ramsey (and I seriously hope we do) if iwobi could be redeployed in that role somehow? Or if Chambers comes back to play “DM”… Read more »

Hoping Chambers will get a chance at DM next season. He can provide a cover at CB, but he’s been pretty useful for Fulham at DM.
Don’t think Iwobi would be well suited for that role, but could be proven wrong. Good technique, strong, eye for a forward pass, but not positionally aware enough IMO.

Was thinking the same. Iwobi would be perfect and he has close control, he can operate in tight spaces.

Iwobi did play there a little bit under Wenger and at 10. And tbh I felt it suited him more than wide forward, where his inability to finish makes him more of a liability. Emery hasn’t deployed him in those roles so far, though that may be party down to our total lack of wide players. I think it’s an option, considering the sheer amount of positions we need to strengthen.

Torreira at 8 is an option too; though Chelsea have had mixed results doing the same with Kante, Torreira may be even better suited to it.

He played there more as a 10 and 8 at academy level. The whole wide role has only really been since his first team involvement.

He’s really not a forward player but a CM, and I do think he should be tried there.

Hope to see Ramsey back against Brighton! Would be massive if he could play his last home game for us & help us break down what will surely be a difficult team.

On another note: After watching last night’s game, I really find myself hoping we’re looking at Van de Beek as Ramsey’s replacement! What a game he had, he was absolutely everywhere. And the fact he scored against Sp*rs doesn’t reduce his appeal ?

Without Champions League I’m afraid all those appetising Ajax players are just a dream. Instead of Neres we’ll be in for Navas

There’s still hope for Champions League though!
But even then, I imagine neither Neres nor Van de Beek will be short of suitors..

I was thinking the same as you, Would love if we go after him. Sure, we do have lot of holes in our squad, and perhaps not much money (if rumors end up being true), but he is a player I’d love us to chase and get, no matter the price, the kid seems brilliant.

Says on BBC he’s out for the season..?

How is it that the one player that has looked like fitting Emerys system better than anyone else is the one that Emery decided to rescind a contract to after he had already agreed a new deal?

I was under the impression that this has happened over Emery’s head, and he doesn’t deal with contracts personally. I may be wrong but I that makes more sense.

You’re not wrong, that’s exactly that.
I’m still not quite sure why some people still think we operate under manager model.

Lets get to the finals.

That will really make him a legend.