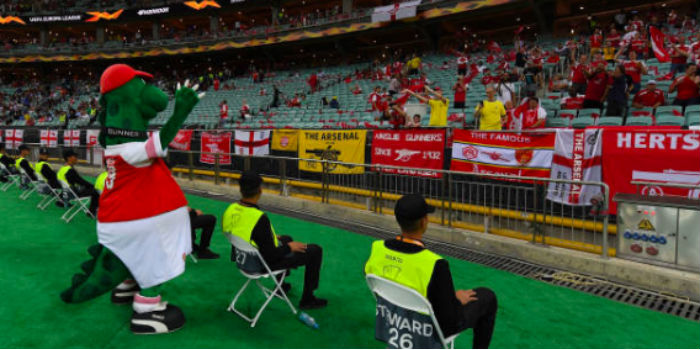 Not that it really matters at this point, but UEFA are apparently investigating claims that officials at Baku’s Olympic Stadium opened the turnstiles when they realised the venue was nowhere near full for the Europa League final.

Arsenal and Chelsea only sold around 6,000 of their 12,000 allocated tickets and many sponsors are thought to have returned theirs when the logistics of getting to Azerbaijan proved difficult.

Embarrassingly for the Azeri, it meant lots of empty seats were visible after the game kicked off. In an attempt to save face, The Times reports that they tried to fill the empty space with anyone who happened to be lingering around outside.

We’re not going to criticise the idea that a few locals got to watch the game for free – to be honest, we pity the Arsenal supporting ones – but it does further underline what an absolute shitshow the organisation of the final was by UEFA.

No doubt some faceless suits in Nyon will spend a couple of weeks preparing a report before handing issuing a tiny fine.

For the record, the official attendance was 51,370; the third highest for a Europa League final. The stadium’s capacity was reduced from 69,000 to 62,000 for the occasion.

Report: Vitoria pressing for Arsenal game to be rescheduled

Two questions: does this impact the result? Why should we give the slightest shit about suits in Nyon?

My point was that this article doesn’t really help with the issues that our club faces. The performance was awful last night, the team is not in good shape. We know that the whole staging of the final in Baku was a joke. I’m not having a go at arseblog, it’s fuckin excellent

I know mate, just teasing. It’s pretty fascinating discovering just how much of a shit show this final really was.

Plus we as fans need to stand up to fight this bollocks. Our passion and love of football is totally commodified and we get mugged off on the reg by these cunts. We need to let them know it’s not on.

Me2
Reply to  Toure Motors

Oh sorry, I thought he said suits in nylon.

I’m going to a wedding in Sunderland.

Can you please explain why you would read and article with a clearly written title on what it contains just to get pissed off and write a negative comment about its content? That honestly holds no logic to me.

Would you have been happy paying thousands of pounds on tickets and travel only to find out you could have saved yourself the cost of the ticket by just walking in for nothing?

You would if you paid for a ticket. Either that or your fellow fans ain’t worth a shit.

Be interested to know if the official total was made up of returned sponsor tickets, the unsold Arsenal/Chelski ones etc etc.

I think most of the alleged crowd numbers were hiding somewhere off-camera – much like our defenders.

Not sure of the legal aspects but I don’t think UEFA can fine the city of Baku. They can only fine football clubs I would have thought.

presumably there is a contract with whoever owns/manages the stadium

This was funny to read. I’m in Baku still and went for a run this morning and found myself on the pitch. No security what’s so ever. I took some photos and watched them remove the green grass before running back to my hotel. It would have been the run of a lifetime had we won.

Baku whilst a sh*t show to get to was a great city to visit.

Is it Baku or UEFA that is shit?

Apart from our performance I think that’s one of the biggest shames, I’ve heard great things about the city and UEFA f**kups have given it a bad rep. The funny thing is, airlines actually like making money, maybe in that 2 years uefa had up its sleeve it could of given them a heads up 30,000 odd people might wanna book a flight that week and things could of been a little different. Sad state of affairs all round really. Sounds like a nice run though ?

I agree with previous poster. Who honestly gives a shit? I feel bad for the poor fans who turned up in that shit hole of a country and had to endure such a gutless performance that they did. If the club had an ounce of decency (and it doesn’t – not anymore) they would refund them their money, or at least some of it.. Emery has been a mistake – that has been proven but he would regain some standing by selling the garbage that Wenger signed. And for me, Wenger’s “legacy” was terminally damaged when he thought that signing… Read more »

Referring to anywhere as a shithole of a country is classless, xenophobic and pathetic. Any football related opinion you share after that kind of nonsense is likely to be trash too.

Ex-Priest Tobin
Reply to  Me2

One of my Arsenal heroes Jose Antonio Reyes dies in a car accident? RIP

Don’t know about the turnstills but we were turned over in midfield too many times and the defense was shambolic even without Mustafi. First goal against, the aging KOSCIELNY was too slow to cover Second goal MONREAL lost Pedro. Not the first time he has been out of position this season. Third penalty SOKRATIS got drawn to the ball. Fourth goal TORREIRA was fleeced in midfield, not the first time by any stretch this season (In fact 6 or 7th time) Yet some people prefer to blame others whilst conveniently giving these players heaps of praise. Inconvenient truth, we are… Read more »

The inconvenient truth is that in the second half an experienced side exploited our non-right wingback and his side of the pitch.

Penality, actually Papa was the least at fault: Monreal failed leave Giroud in the offside, Kos missed the tackled and forced Papa to engage, which left AMN chasing Giroud. Collective f*ck up.

Is that not a huge security risk?

That’s the first thing I thought, too.