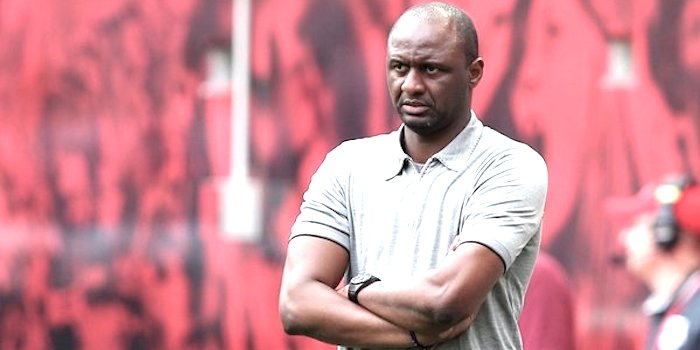 Patrick Vieira has his eye on the managerial job at Arsenal. Or Juventus. Or Man City. Or AC Milan. Or Inter Milan.

But maybe one day Arsenal, as he’s expressed a desire to return to one of his former clubs as boss.

The Frenchman is most widely associated with the Gunners, captaining the side to an unbeaten season in 2004, as well as winning the double in 1998 and in 2002.

Vieira led Nice to 7th in Ligue 1 this season, and spelled out his future ambitions, saying, “I want to take my time to get there, but I would love one day to manage one of the teams I played for in Italy or England.

“When you have an exciting league like in England, you always want to get involved. But I don’t put a time on it, because my work will decide if I deserve it or not.

“That is what will dictate if I deserve this kind of job.”

And on his Arsenal link, he spoke highly of Arsene Wenger, continuing, “I’m really privileged to have worked under Arsene and him saying that is really flattering.

“If I manage Arsenal one day I will take him for dinner and I will pay the bill!

“He didn’t say it to put pressure. It’s just flattering that the guy who spent over 20 years there thinks I have the quality to manage a big club like Arsenal one day.”

Nice is Vieira’s second managerial job, having been in charge of New York City from 2016-2018.

Wenger: You will see me in the dugout again

Unfortunatly this man doesnt feel any kind of love for Arsenal.

Red-Sky
Reply to  The Swede

And he was very vocal with his support for Rennes over Arsenal.
I don’t wish to see him or any other former player appointed for sentimental reasons.

Funny how such a widely acknowledged legend taking over as manager makes me kinda sick. I really don’t want him as manager at this club.

Kwame Ampadu Down
Reply to  Devlin

Your post makes me kinda sick Devlin so I guess we’re all in it together ?

Me neither, nor Henry. I’d rather have Freddie at some stage in the future when Unai’s won everything there is and wants to go home for a change of scenery.

The last year Vieira spent in MLS, he was being hailed as a great manager. He started giving an identity to his team and he was close to his players. Players said he was like a captain.
Henry has a huge knowledge and interest un football. His coaches and teammates used to say, you play in a remote country and Henry knows about their league and all the players. Henry will never be loved by the public but he can be like Mourinho.

Fuck is wrong with everyone?

If he develops and is good enough as a manager, get him in. Arsenal legend.

Why all the hate?
The guy was a fantastic player for us, and if he proves himself at another club, there is no one I’d rather see a our manager, my favourite Arsenal player ever (I’m not saying the best player ever, but personally my favourite).

Amazing how all the fanboys seem to forget that Viera slagged off the club on multiple occasions after he left.

These same people probably think an attacking midfielder on £350K/week with only 2 league assists is acceptable.

List of former players who slagged off the club on multiple occasions:

Litterally all of them who still have mouths and are breathing from said mouths.

/Fans slag off club, boo players, abuse manager for years
/former player does the same
/Fans declare said player is a c*nt don’t dont ever want to see him involved in the club

This isn’t then irony so many fans these days. It’s like when we demand loyalty from players when we’re the first to be disloyal to players (even academy players).

I’m not sure if its right or wrong, just that if we hate on every player who’s criticized the club, we won’t have any ‘returning legends’ anytime soon.

Whether that’s because of how the clubs been run or because we accumulated ingrates at a truly unique clip is the big question.

More likely one of the Milans.

We do need to have a better capability in midfield.

Despite the hype (by some), Torreira has hardly been the answer this season.

Started off decent (still provides some bite) but largely found out later half of season and bullied off the ball physically.

He is no Santi (close control with both feet)

None of our midfielders provide enough control and security on the ball.

We miss the ability of Viera (physical), Santi (Technical) or Diaby (both) in holding the ball and carrying/dribbling it up the spine.

And the relevance of this to Vieira possibly returning to Arsenal to manage at some indeterminate point in the future…?

This is what Santori does. He’ll start slagging off Elneny soon.

The one good thing I give him credit for is he’s reduced the length of his posts considerably.

Wouldn’t mind him at City.

Just pick the best person for the job, Man United look to be a case point of what happens when you use nepotism as a form of recruitment.

I don’t want to see Henry or Vieira near our dugout unless they’ve developed a CV worthy.

And thats exactly what Vieira is saying… if he proves himself capable then why not?

Really like how he is letting his actions and results decide if he has the qualities to manage in England. After all, it was the same attitudes that made him a legend at Arsenal as a player.

Hope he becomes successful, but in all honesty I’m more interested in Freddie. I’m more familiar with his style, and I do think his relationship and desire to use youth and our academy is something we may need in the near future.

But by and large I also really like Freddie’s style and formation (initial blitzing of the game before settling on a slower tempo positioning, uses a 4-3-3, etc).

He’s not doing too badly as a manager, and long may this continue.