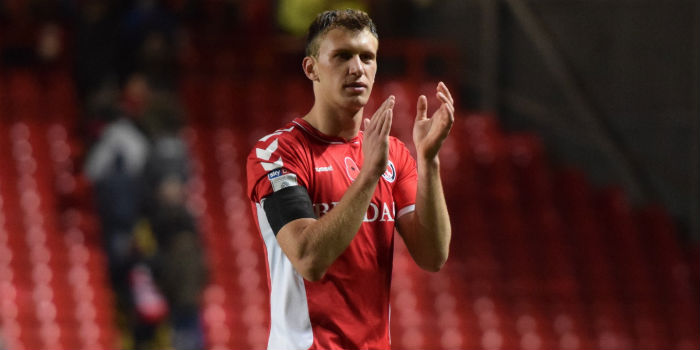 Krystian Bielik says he has no intention of going to back to play for Arsenal’s U23s, and that if he’s not afforded the chance to play first team football next season he’ll seek pastures new.

The 21 year is currently away with the Polish U21s at the European Championships, and will return to Arsenal later in the summer for pre-season training.

However, after a successful loan spell with Charlton where he featured regularly and helped them to promotion to the Championship, he does not want another season at underage level.

Speaking to local media he said he was unsure about what lies ahead, but is certain he wants to play at senior level.

“My future is unknown but there is one thing I can say for sure: I will definitely not go back to Arsenal U23 team,” he said.

“At this stage it wouldn’t make sense. If I do not receive the possibility to join the first team permanently, I will have to look for other solutions.

“I feel like a senior player now so I want to play senior football. This is, however, not the right moment to discuss these issues as I want to be 100% focused on the European Championships.”

With question marks over how we’ll bolster our defence next season, Bielik must surely be in consideration at least, but it remains to be seen how he’s viewed by Unai Emery.

Thanks to reader Kazik for the translation ?

I mean, hes worth a squad place isn’t he? Ball playing CB, has experienced English football. Or we could sell with a buyback clause or sell on clause. We have to be more savvy with player sales.

No to sale!
He has to be in the First Team.

So, him and Chambers battling it out over the Craig Eastmond role?

Sell Mustafi and give Beilik a chance as backup to Kos/Sok/Holding/Nacho! Handy midfield option too. Makes a lot of sense to me.

Can’t be any worse than Mustafi

If Torreira goes (and that should be at a good profit) then Bielik could fit that role well given his Wembley performance.

Where is Torreira going?!

At our current league 1 level, he should be a starter if not captain. Our Defence is a mess. I t would save our millions, oh wait, you dont even have a budget close to Everton.

Give him a go, if it doesn’t work out, sell him on with PL experience. Will make him more valuable surely?

*Does not want to play for Arsenal U23s as he wants senior football*
*Speaking from Poland U21 camp*
Lol in all seriousness from what I’ve seen of him he looks like he likes a challenge and is pretty comfortable on the ball. A little more bulking up + more positional sense defensively and I don’t see why he can’t be competing for a spot in the first team. A season in the championship seems like the best decision for all parties involved

100% focused? Still got time for a comment to the press about his future….

It’s probably in the rounding 🙂

He’s saying the right things, I love it when young players aren’t content to just sit around collecting their wages.

I’d be inclined to renew his contract and keep him.

Then sell Elneny + Chambers, and use those funds to buy a left back or a wide player, hopefully we’d get £30-40mill for both?

The right idea the wrong prices. Although it is a mad market. You might get 30million in total

Better off selling him while his stock his high. Emery won’t play him other than the inconsiquential Europa matches anyway. Would rather run a first team player onto the ground and blame the fitness guy

Bielik has 1 yr on his deal, his stock certainly isn’t as high as it could be. Maybe Emery ran the first team into the ground, because he didn’t think the overall squad were of sufficient quality? And we also had 3 long term injuries to key players… Our form started dipping when he started using stronger teams in the latter stages of the Europa. Maybe he thought throwing young players into a highly pressurised environment, and at a key stage of the season, wouldn’t be doing them or us any favours? Both in the immediate or longer term… Emery… Read more »

“Very successful”
Literally his career is Europa where we don’t want to be in and titles with the Man City in a joke league with is going to be named Uber Eats Ligue 1.
He lost the title to a bunch of kids with the most invested team. If that is your measure of success, then you deserve this guy.
Emery is as average as they come. And obviously not getting 3 points in five games is a managerial issue. A team without a manager could have got three points

7 titles in 2 year in France

3 European titles in 3 years in Sevilla

Three 3rd place finishes in la liga with Valencia, in spite of crippling debts and having his squad decimated every summer.

Took Almeria to Spain’s top flight for the first time in their history in his first season, then finished 9th in La Liga

At Lorca he won promotion to the second division for the first time in their history, and then only finished 5 points off back to back promotions.

Emery is a winner with a fantastic CV

I’m not even much of an Emery man, but I have nothing but pure respect for what he has achieved in his career. Sure, there are other managers out there who are better than him, but he does a job. Let’s stop speaking of Emery in such derogatory manner.
Could we have done better last season? Yeah, but we certainly could have done a lot worse too. Give him time

I mean, he’s on record to admitting the medical staff aka Darren amen the rest, telling him not to play Ramsey as he was at risk of injury. He ignored it, played Ramsey and he got injured. Then. Darren gets tired.

Let’s not pretend there wasn’t always a justified excuse for what he did. What reason is there for not playing Saka in cup games and instead getting a broken Suarez on loan?

Deserves at least a chance in pre-season to see what he is made of, one of the stand out players for Charlton winning promotion a natural defensive player can play DM/CB at 21 it’s sink or swim time, but with AFC financial situation and poor defense he might be able to add a better defensive side to this Arsenal team

Injuries stagnated his progression under wenger! Hoping Emery sees something good in him (really hoping he’s good enough, would save us much needed cash)!

Keep if we sell Chambers.
Sell if we keep Chambers.

Why not put him in the mix with Torreira, Xhaka, and Guendouzi at the base of the midfield? We have to start giving these young players a chance to play in the first team — that used to be the Arsenal way.

Arsenal eniyrage youth? Perhaps under Wenger, not so sure about Emery who is no risk taker except in the last five league games of the season……

This will be another Serge Gnabry and Adelaide situation. If he isn’t afforded a first team squad place he’ll go. And before you know it he’ll rock up at a top club in a year or two and be worth tens of millions. Get him in now…he can’t be worse than Mustafi last season.

I agree with him. It’s time to take that step to the first team.

He had a great season in the Championship, where Mustafi’s level this year might not have even cut it. I say give him a shot in the first team. We obviously have budgetary constraints as well, so why not dump Mustafi for whatever we can get, and play Bielik. I’m sure his wage is much lower than Mustafi’s. We’re never going to recoup anywhere near the 35m that was paid for Mustafi anyways so….

It wasn’t the Championship, but I agree with the sentiment.

Correct attitude. If we’re serious about promoting from within, then he’s surely got to be a prime candidate. Otherwise, what’s the point?

Weve wasted pretty much every player we bought at a young age. He could be an exception and hes worth a chance. Koscielny mustafi and monreal need new blood

He’s tired of the rites of passage.