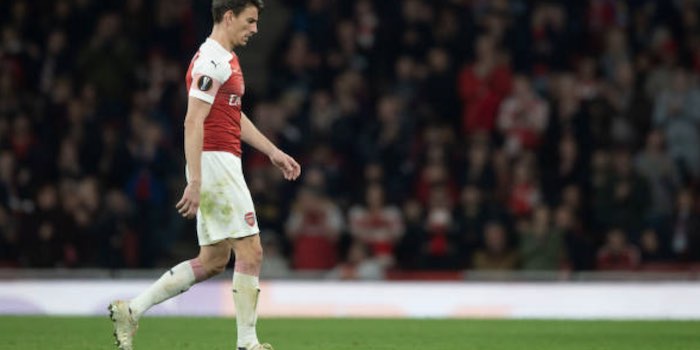 Laurent Koscielny is said to be considering his future at Arsenal as he weighs up the temptation of testing himself in another league before drawing a line under his career.

The 33-year-old has one year left on his contract at the Emirates and, according to FotoMac, is being courted by Turkish side Fenerbahce.

Damien Comolli, who spent seven seasons as Arsenal’s European scouting operation, is now sporting director at the Istanbul club and appears to have been convinced that his compatriot still has the legs for a few more years at the top following his Achilles injury.

Just for good measure, Comolli also likes the look of out-of-favour Mohamed Elneny and thinks a double swoop isn’t out of the question.

Back in September, Koscielny’s representative, Stephane Courbis, revealed that our club captain was seriously considering his future this time last year when Arsene Wenger made his exit. At the time, he had three offers on the table, including one from a club in China, before he went down in Madrid and had to go under the knife. More recently, Inter Milan have been linked.

From an Arsenal perspective, it seems like a no-brainer to keep Koscielny around for the final year of his contract. He’s proved over the last few months that he can still cope with the rigours of the Premier League and his experience, especially around the youngsters, is vital. All the more so given Cech, Ramsey, Welbeck and Lichtsteiner are leaving.

On the other hand, Vinai and Raul are trying to squeeze value for money out of the squad and if they think they can generate a fee for Kos and get his wages off the bank balance, they could be tempted. As for Elneny, I think we can safely assume that he’ll be moved on without fuss in the coming months. He’s contracted until 2022 so driving a decent price is a necessity.

I hope he does a Bergkamp. Sticks around, gradually being eased out of the more hectic games over the next year or two, then retire with a classic last minute corner goal on Koscielny Day. Absolutely love this man.

But I thought that it was the complete mess (in personnel terms) that Venga left us with, that got in the way of immediate success for our new tactical genius modern manager … ?

Would far rather we kept him, given his age and contract he’d drive a rather small fee, but we’d lose the priceless importance of his experience. If we’re careful with him we can do like United did with Ferdinand and get one good game out of him each week and make sure his health is monitored and rest days are increased. Plus, I want his last Arsenal game to be next year’s Europa League final… The one that we win!

Thierry Bergkamp
Reply to  Leno me, I’ll be your friend

I’d see the logic if he was anywhere near as good as Ferdinand was, but he isn’t.

Wouldn’t be against letting him go, Our whole defence needs re shaping and like it or not he’s a been a part of our woeful defending for a long time now, Time to start from scratch,

I sort of agree, but he is the best we have. Hopefully Holding will be back early, but we need a defensive left back (I mean one that can defend too) and at least another centreback, we would need 2 more centrebacks if Kos goes.
Not sure Chambers is good enough. Going back to Holding, for the 20 matches we were unbeaten he was good, but needs a season to see how good he really is.

I hope he stays for one more season..

If we want to compete with the big boys, we need an upgrade on a 33 year old Kos. When fit he’s still our best defender IMO, but he isnt what he used to be and we need better. Having him sit on the bench watching on isnt best for him or us.

Time to move a fantastic stalwart on.

Yes thank you Koscielny but please go now your time is up. You’ve done amazing things for Arsenal now its time to move on. New blood needed all you need is one defensive strong leader and one super creative midfielder which the team can play around…

‘New blood’ is certainly needed but surely having Kos around for another year can only help them develop (including Holding and Chambers). He has huge invaluable experience don’t forget which can help all our young players.

Linked with a move to turkey? Nah, he’s not going anywhere. What do the papers think he is? The new ospina?

I would prefer we keep him but he’s been an absolute loyal servant to the club and a fantastic player, so I think we should defer to his wishes. He’s earned that for his dedication this season playing when he was absolutely knackered.

We should sell him

I can’t see anyone paying more than £5m for Elneny and he’s one of the lowest earners in the squad so I think he’ll stay.

I think in contrast Koscielny’s role in the squad is the one that should most obviously go to an academy promotion.

Keep Koscielny. Would not expect him to play often next season as I foresee Holding and Papa to be our first choice central duo. He came back after a long injury and formed a good partnership with Papa. He then proved that he can stay injury free until end of the season. With Cech and Lichsteiner gone, we need an experienced voice in the dressing room. Another thing, I would glad to have Chambers back, he can turn to be a useful squad member better than Jenkinson, able to play across several different positions from his experience with Southampton and… Read more »

Kos can help us negotiate through Europa and cup games. Give him as much time as we give to young players when we ease them into action. He deserves proper management of fitness and rest. He can be a very good option coming from bench as well. Please keep him!!

Only question is whether he wants a bit part role. If, as the article says, he wants to challenge himself in a new league, it may suggest more playing time.

If he’s happy playing a reduced role at the club, we should definitely look to keep him on.

I hope he doesn’t go but in my opinion he has earned the right to do so if he chooses. Best wishes to him.

So many on here asking to keep a high salary player with one year left on his contract. Are these the same fans who were complaining about letting players run down contracts and go for free? If we can get a decent fee for Kos, I think we should take it. It then adds to transfer budget for new players. Keeping him because he could be a good bit player is foolish when we have Holding, Mavro, even Chambers who can cover that and get experience. Remember, it’s Kos who’s looking to move on – don’t blame the club if… Read more »

If he wants to move on, I completely agree.

But if he moves on we absolutely need to bring in 1 top quality CB, better than any we’ve got. Chambers has not proven himself at CB at the level we require. Holding I think has the ability to get there. But we need someone better than everyone we currently have to fix this defense.

Like Per, i hope he stays and retires with us. Elneny is still a valuable backup player, only issue is Emery did not trust him last season.

Not a surprise (except to some) He will face increasing wear and tear issues. Availability will be a problem. He is also slower then before. I would let him go. which is why I mentioned it is not a given that we will shed as many players as some people prefer to imagine. We have too many areas to fill with too small a budget for quality across the board. Thereby we have to prioritise very carefully. As I mentioned, likely priority will be a Cback, a CM and a winger (regardless of Nelson) Which means Monreal will potentially be… Read more »

You really do have a superiority complex. The egotism in constant self-referencing is overwhelming. You speak as though we should all take note of every single comment you make: “Not a surprise (except to some)…” “….which is why I mentioned…” “…as some people prefer to imagine.” “As I mentioned,…” “Contrary again to some people who prefer to wank off to non existent proof of capability…” “Too many people are easily fogged by what they want to see rather than logically and fairly watching what is in front of them.” Who are the people who say these things? Largely I see… Read more »

Fuck sentiment. He had maybe 1 good season and is well past his best.

Quite simply our performances have been wretched for the last few years. All the experience in the dressing room has not changed that. These guys are all on big wages. Time to clear them all out and start again with young, hungry players. My solution is to sell everybody at the club over 28 yrs old. Might sound heartless but it is what is really required if we want real change

I’ve never rated Kos as a top drawer defender, but at this point a sale isnt worth our while. We’d get peanuts for him and he’d be a great squad player to have around. Really depends on how much wages we can free up.