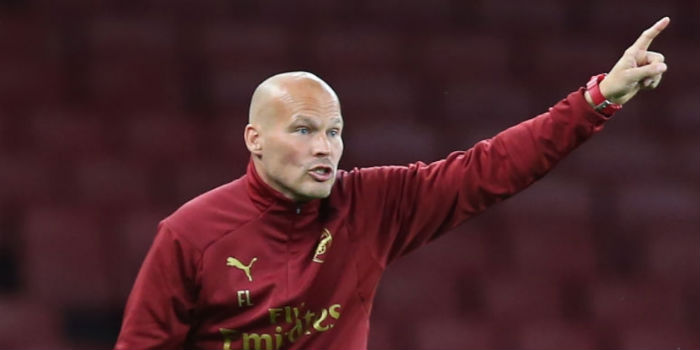 According to The Times (£), Freddie Ljungberg will join Unai Emery’s first team coaching staff this summer.

The Swede rejoined Arsenal last summer following a short spell at Bundesliga side Wolfsburg and has impressed as head of the under-23s. Under his mentorship, the young Gunners came second in Premier League 2 last season.

It looks as though Freddie will be an addition to the first team set-up rather than a replacement. Steve Bould, despite reports to the contrary, is set to retain his position, or one very similar, while Spanish duo Juan Carlos Carcedo and Pablo Villanueva are also staying put.

Rumours linger that our head of performance Shad Forsythe is heading to AC Milan after he was pictured at the Italian club’s training ground. Will Ivan Gazidis get that deal done quickly or will it become a Forsythe saga? Not sorry.

Our coaching staff roster currently has 26 names on it. We wonder whether this will be a summer of tweaks or if more changes are on the horizon.

I wonder if this is geared towards a Freddie Revolution should Unai fail to deliver on his targets again this coming season?

A D
Reply to  Rob Fuller

I think so also. The worry i have for next season is, with it being emery’s last year of his contract , how will the players react to the uncertainity, considering how dreadful they were towards the end barring napoli and valencia games. With freddie coming into the fold at least he can recommend the use of the youth players Which if we are led to believe by reports , three of them are already being targetted by some of europe’s biggest clubs In my opinion – Emery should be relieved of his duties – it was his instistance that… Read more »

IamaGoober
Reply to  A D

The reason why Spurs were able to obtain the signatures of highly sought after youth players on the fringes of first team football at their respective clubs was down to Paul Mitchell. He was (I think) the chief scout of Southampton at the time. He made the move across to Spurs along with Poch. He ended up leaving in 2016 because he hated Levy and is now over at RB Leipzig. As I commented on another posts a few months ago when we were getting linked with Edu. Mitchell is the guy we should be getting in as our knew… Read more »

Paul Mitchell is doing a good job in Germany. Arsenal have been navigating lately like drunken sailors. From the Sanchez and Ozil saga, to the Ramsey issue, to bringing edu in as director of football. Mitchell has a good track record of performing in Europe (England and Germany), so he should have been a contender for the position. This is a very important transfer window for arsenal and we have too many people learning on the job. We have lots of players leaving and they’ll be lots of players coming in, so we need to make sure we get it… Read more »

Agree mate.
Paul Mitchell is a genius.
I think Raul should after him rather than trying to lure Edu to the technical position. The way Edu spoke about the link makes me think he doesn’t want the job at all!

I tell you what, I would love to see what influence Freddy’s presence has around the first team dressing room next season. And I completely appreciate I am massively getting ahead of myself here. And I am in no way suggesting that if Freddy got given the manager’s job on permanent basis. That we would see anywhere near the same level of success. But there are certainly a few interesting correlating factors between the early years of Guardiola as a manager at Barcelona, and then Freddy’s career to date. That idea ties in with an interview Raul gave recently where… Read more »

The idea that Freddie could take over one day is something that has been in my head for months now. I do still believe in Emery and he certainly has to be given next season, but ultimately I would love to see Freddie in charge of The Arsenal.

Again fail to deliver on targets…I’m not sure the hierarchy expected any better than a top 6 finish and EL finals. The winter transfer window was cautious because they wanted to see if we will be in the CL next year, they didn’t go for it to push for a CL place. I’m sure the hierarchy would view that the targets were met. For next year, they would want to go one better, qualify for CL but with a lower wage bill, bringing through some of the youngsters from the academy i.e. increase their value, so some can be sold… Read more »

Any word on Pires and Bouldy?

Great news will help us bed in the promoted academy prospects and use them right and hopefully make a few of them see an ally in first team and stay .

Emery tried to play his way at start of season but realised that group of players not able for it. Mostly the make up of the squad dictates formation and style of play and we had a group who were used to Wengers no pressure football on and off the field. Freddie would have knowledge of the younger group and help them integrate into first team and replace the mindset one player at a time. Though the headline suggests he may have a playing role.

That would be fuckin’ excellent

He assesed the squad and knowes every detail, got a plan to build a team around Ramsey etc. that impressed the jury. So your opinion or the former press release is total bullshit… I’m so undecided.

I would rather Freddie stay at U23’s for next few seasons. I am afraid of conflict between Emery and Ljungberg about attacking philosophy.

Not sure about this.
Unless he’s used due to his connection and trust in the youth, because if not, I’d prefer he stays with the U23s and develop his own ideas further. I liked his use of 4-3-3 and rapid pressing and counter attacking, and I’d like him to develop further.

Also not sure if he’ll be seen as a legitimate member of the coaching first team, or as a potential threat as the likely successor.

He seems to be doing well as youth coach. I’d be happy for him to spend at least another season honing his craft and gaining experience. How many assistants does Emery need? If he is moved up to first team duties, it’ll be interesting to see who replaces him…

26 coaches? Surely one of them must be capable of coaching the defence.

I don’t think Emery has been conservative at all. If anything, he tried a little too hard. His been spot on with most of his substitutions this season and they have made impact. Where he may have made an error was trying to go back 4 to unlock our offensive potential better or at least accommodate more attacking choice. He did that around Xmas and we lost a number of games. He tried again with Palace game, Mustafi lost the plot but thereafter he persisted with back 4 and we still leaked goals to Wolves (That was Koscielny and Sokratis),… Read more »

Emery is conservative, and I think there has been plenty of data and analysis on this website to back that claim up. He played a bolder game of football at the beginning of our season, but gradually gave that up. I know you love the back-three with wingbacks, but not everyone enjoys the one-route-cut-back to our offense. We used to play through the middle to some degree of success in seasons past, and I’d love to see more variety like that again, and to set up the team in a way that emphasizes the attack and putting the game in… Read more »

Someone who knows the market VERY WELL and has a track record bringing players.

Surely we can afford to pay more than Lille OSC for Luiz Campos. That would be our best signing this summer.

BUT instead we will pussy foot and pander to current power struggle. IT SEEMS we are directionless at the moment with no one really seeming to take a lead.

Makes me wonder if a certain Dutchman is coming back to coach the U23s.

Well, i don’t know what you guys think but after watching some U23’s matches i actually prefer Freddie to Emery. Emery only urges the players to cross and cross which makes me sick sometimes. That might be the reason we couldn’t break smaller teams easily. On the other hand, Freddie’s attacking philosophy reminds me of those sexy Wengerball. Ahhh, those were the days… But yeah, i agree with the idea that we need a technical director. If Emery wants wide attacking player then sign for him! We have no budget so the recruitment needs to be smart! There are rumours… Read more »