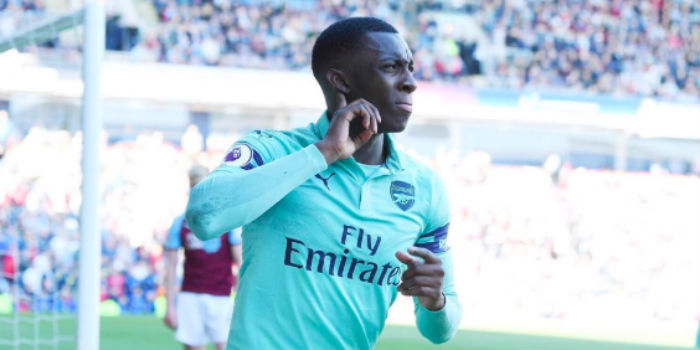 South London Press claims Charlton Athletic are interested in taking Eddie Nketiah on loan next season as they prepare for life in the Championship.

The Addicks, who gained promotion via the play-offs last month, have had a slightly barmy 24 hours where it looked like manager Lee Bowyer might leave only for the club to confirm a new deal this morning.

He can now turn his attention to strengthening a squad that will likely lose Gunner Krystian Bielik, who impressed at the Valley on loan last season.

Nketiah could probably do with a spell of first team football away from the Emirates and is likely to attract admiring glances from clubs both here and abroad this summer.

The England under-21 international, who scored his first Premier League goal in our win at Burnley on the final day of the season, came very close to joining Bundesliga side Augsburg in January only for Unai Emery to veto the move due to a lack of back-up for Pierre-Emerick Aubameyang and Alex Lacazette.

The Gunners appear to be prioritising an attacking wide player – Lorient’s Alexis Claude-Maurice is of particular interest – and 18-year-old Brazilian starlet Gabriel Martinelli is also tipped to bolster our under-23s. That might provide enough wiggle room in the squad to allow Nketiah to develop elsewhere, albeit temporarily.

In a statement confirming structural changes to the coaching set-up, Arsenal reaffirmed their desire to better help Academy graduates get first-team opportunities. You’d imagine that loan manager Ben Knapper’s phone will be ringing a lot this summer, it’s his role to identify and recommend third-party clubs to play their part in our players’ development.

Really think there’s a player there with Eddie, Just needs better support and structure around him. our loan deals don’t tend to end well

You forgot to factor in that Charlton magic which seems to hit our lads when they head there!

“Really think there’s a player there with Eddie, Just needs better support and structure around him.”
[Agree. Though, he needs to show enough to get some starts. Objectively speaking, he hasn’t impressed enough to do so.]

“our loan deals don’t tend to end well”
[Disagree, strongly. This seems like a meedia trope. Bellerin was once out on loan (remember?). Coquelin went to Charlton and came back a beast. Reese is out on loan in Germany, had a strong season and is coming back hot. That’s just with this crop. There are many others.]

Eddie never got the chance. How can he impress on the bench ?

Yes. I still can’t forgive Emery for bringing on Guendouzi instead of Eddie when we needed a goal for CL qualification against Brighton. He might not have scored but stood far more chance!

We didn’t really have a choice but to keep Eddie considering we pretty much played with both Aubameyang and Lacazette all season. If one of them did get injured, Eddie would’ve been right in the mix. And I agree the guy definitely needs to play to develop, although, and I might be in the minority here. I think there is a case for keeping him around the first team again for at least the first part of the season then reviewing things in January. But Emery has to use him more in the domestic cup games, in the early rounds… Read more »

If our loan deals had been doing so well I doubt we would require a ‘loan manager’. Loans have been mismanaged at the club for years, highlighting three (two and a half, Nelson hasn’t done anything for us yet) successes somewhat ignores all of the hopeless loan spells we’ve sanctioned. Something we can definitely improve on!

Actually Bellerin’s loan didn’t go that well. He spent most of it on the bench.
Same for Nelson tbh. Oh and Coquelin’s Freiburg loan was an absolute disaster, they even played him mostly as a LW FFS.

I dare you to name them all. You won’t come up with much.

Charlton Athletic are a good club and the Championship is a good standard of football.
Krystian Bielik played almost every week so there’s no reason to think that Eddie wouldn’t play.
There are some clubs who Arsenal should never consider, but Charlton aren’t one of them, they look after youngsters and give them encouragement.

Like West Bromwich Albion. They should be forced to take mustafi on loan after what Tony Pulis did to Gnabry.

Great example, Measure of the man and how bad a manager he is/was

Yeah, if I’m not mistaken I think both Song and Coquelin went on loan spells there and were the better for it! I can only hope Bielik would follow suit and be good enough to make a difference for us this season. Good club to mature in.

Most of our youngsters that went there on loan turned out better on their return. e.g Coquelin, even sanogo and now bielik.

Hmm. I hope this does not turn out to be another Benik Afobe, JET, or Chuba Akpom.
There is a talent in there that will blossom in the right environment. I hope and pray it is with Arsenal.
Guendouzi and Maurice are prime examples of young players who play regularly in a competitive environment. They tend to develop rapidly.
Our boys need a little more faith from the coaches. I am persuaded Reiss Nelson would have made a considerable impact last season.
All the best Nketiah.

Hope it works out for Nketiah. I really don’t see him getting minutes under Emery. If he can find a scoring touch in the Championship, he can kickstart his senior career with us or elsewhere.

Bundesliga maybe? Different culture, away from London… Nelson had an interesting experience and even tho Eddie probably will have more playing time in the Championship, playing in Germany and away from home will develop his personality and will grow as man…

I like the idea of him joining a Bundesliga team.

Great league, competitive, challenging. NOT saying Charlton is not in a good league though, but the Bundesliga has been proving a wonderful place for young talent.

Ya gooner
Reply to  NairoGunner89

Also they have winter breaks and less games overall. Less potential for injury hampering progress. On the flip side however the sheer number ofngames in the championship and below means he’s more likely to feature more often.

Historically, our players going on loan to Charlton have worked out pretty well for us, so hopefully it will be good for our Eddie as well! There is a real player there.
But we need to tie Amaechi down to a new contract ASAP!

My only desire for bundesliga is he can develop away from constantly watching eyes. And there’s sense that no matter what he does at Charlton, many fans will still say “yeah but he needs another loan at a PL club” whilst getting excited about a player from French ligue 2.

I just thibk emery has handled the youth players nketiah and willock really wrong. He gave them less game time, after they broke into the first team under wenger Nketiah ahould have gone on loan this season gone , now its going to be the upcoming season where he could have been a useful option. There is a good player there Very intrigued to see what arsenal plan to do with beilik. He has had a good season and should be given game time. If we sell him i can see that coming back to haunt us Its great ljungberg… Read more »

Tapps
Reply to  A D

Far too early to judge Unai! I not saying he WILL succeed, but let’s at least give him the chance to.

Cycs
Reply to  A D

You had to go spoil everything with that “Emery out” bullshit, didn’t you?!

Homer
Reply to  A D

Emery out? Over Freddie Freaking Ljundberg? Are you high? … good heavens man.

Send him to Leeds

No one should ever play for Leeds…can’t stand them!

Unless we bring in a young striker on the punt, we should keep him. Two strikers (laca, Auba) particularly if we use them in tandem is a big risk in terms of injury should one of them succumb to a knock.

But even with Nketiah, you feel we may benefit from one more player who can deliver something for us form the bench.

Then again the priorities we have existing and the budget plus the way we are going about our summer, probably better not to confuse things with additional need up top just yet.

Who needs to go on loan is Mavropanos to accelerate development. As I mentioned yesterday too many people confuse promising 18yr old defenders with another de Ligt. de Ligt you can say the proof is in the pudding bc even at tender age (and few make it so young in the position) he has played an awful lot through the season. I can’t say the same for the certain defender we have been hitherto linked to from France. Therein lies the difference. With Mavro, he needs to make his mistakes (preferably not at our expense) and generally play a lot.… Read more »

The one we really need to lock down is Nelson. Again not sure what the tack is with the transfer team. I’m not sure there is any need to wait for him to complete his U21 tournament. He showed great promise last season and frankly I wasn’t sure why he was sent on loan. We are bereft of wide players who can take on defenders one on one and we will need this to unlock defenses sitting tight constricting lines and trying to catch us on the counter. This is one of the keys to improving our away form. Even… Read more »

Maybe you should say more then

It Would be a much better next year than staying for some 5-10 last minute entries in various competitions. A break through in championship would take him much closer to a regular game time at Arsenal

I can’t think of a better place for him to go on loan than Charlton. Our players always seem to have benefitted from loans there: Song, Coq, Bielik (ok, not Sanogo though, but… you know… Nketiah just needs a season to get used to playing against the big guys and I think he could be ready.
I just hope he doesn’t end up like Akpom, Afobe or Mavididi and not make it with us, although they have all carved out relatively decent careers for themselves so far.