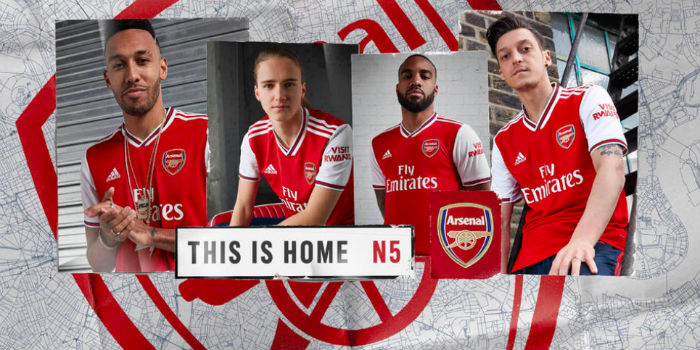 Arsenal fans can now purchase the new adidas home kit online and in-store via the club and our new sponsor.

Leaked pictures of the various kits have been doing the rounds for a month and last week a promotional video featuring various players, Idris Elba and Ian Wright went viral when it was ‘accidentally’ published on YouTube.

This is Arsenal. This is adidas. This is home.@Arsenal ? @adidasfootball

Alongside the home and goalkeeper kit, various other items from training tops to tracksuits are also now on sale.

As is customary these days, the kit manufacturers have released a bit of blurb explaining the inspiration behind the design: “Arsenal and adidas have a rich history together beginning when they first became Arsenal kit partner in the 80s and early 90s. The new 19/20 home shirt has a refreshingly classic look we know fans will love drawing inspiration from adidas’ first reign as Arsenal kit sponsor with the retro striped V-neck collar and also arriving on the 30th anniversary year of our historic league title win against Liverpool at Anfield in 1989.”

Managing director Vinai Venkatesham added: “adidas’ core values mirror ours, they’re progressive and innovative and their bold ambitions for the club and the partnership are aligned with our own. We’re excited to have adidas by our side as we continue to develop and push boundaries together both on and off the field, the Arsenal way.”

It’s been a long time since a home shirt was given such an overwhelmingly positive reception – there are even reports of long queues outside the Armoury store at the Emirates – so well done adidas. And welcome back.

Lovely now let’s see some some new players modelling it

About 417,000 replica shirts is the equivalent of one Kieran Tierney. Best get buying!

Everything’s better when its “official”. No need to tell the fans that during this transfer window.

I always thought Ozil would be the player Adidas chooses to roll out our new kit. He is the most recognisable Arsenal player globally and he is an Adidas sponsored player. I wondered though about the impact selling him would have on our commercial pull and our ability to sell Arsenal as a brand without a global star in our ranks. Ozil has close to 10 million more followers on twitter than the club itself and more than 5 million on instagram, having him wearing the brand must have been a huge reason for Adidas coming on board and the… Read more »

Arsenal won’t, and can’t, sell Ozil. Ozil has made it very clear that he enjoys living in London and clearly he enjoys his current contract, and players hold the balance of power. Emery can freeze him out again if can’t figure out how to coach him, but the onus is on the manager to get the best out of his players and to create a coherent unit. The players seem to love playing with him, and previous managers seem to have gotten the best out of him — make it work somehow.

this is the most coherent post on Ozil I’ve read – it is the coach’s job to make all his players successful.

I’m not sure he was better at Madrid than he was with us, especially with Alexis.

So he was sh*t at Madrid too?

Mesut had a good 2 month start to his Arsenal career as well as that fantastic 5 month period where he got 19 assists.

In a 6 year career, 7 good months is not good enough.

Some bloke compared him with D Silva the other day, and the stat matchup was pretty similar — one is a hero, the other a zero. Skewed perceptions by fans, who clearly have their biases. He’s frustrating to watch sometimes, but sublime at others. Emery needs to get the best out of him, and he clearly hasn’t done that to date.

So when can I get my grubby hands on the Away kit?

Are we meant to be excited by this?
I’ve seen a red shirt with white sleeves before!
The only interesting thing is how much does the manufacturer pay the club to put an Adidas Puma Nike badge on the front.
The write up is just management bollocks about being “progressive and innovative”, having “bold ambitions” and “pushing boundaries”.
When will we see evidence of this ideology?
Will this shirt make the players perform to the level that we all believe they are capable of?

Sadly, I’m not sure our vision is the same as Adidas’s at the moment?

“progressive and innovative and their bold ambitions” Mmmm?

Love the new kit though, hopefully it will give us a welcome lift.

Lees interest in the Arsenal brand these days.

Which is what the owner should get to know.

We lack players who are top tier in the world to strike the imagination and we have looked a poor brand out of CL for 3 seasons.

BUT if we buy insipid this summer, we will really damage ourselves further yet both competitively and in market brand.

Add to that we lack luster these days with the players we have. Very few capture the imagination beyond the hard core fan base. None would be considered top tier in the world these days.

Plus good to see some fan protest at the kit launch.